Increasingly the churches will either become tools of the State, or will be targeted by it:

Church and state exist in uneasy tension. Both institutions were created by God, and both have their rightful place. And history testifies to the various ways that the two have related to each other. Sometimes there was a complete separation of the two. Sometimes the church tended to dominate the state. Often the state lorded it over the churches. 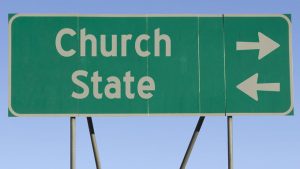 It is the last relationship I wish to explore here. In theory, the Christian gospel always puts a very real check on the state and its powers and pretensions. Because God alone is to be worshipped, and not the state, the church has often had to stand against the state and say no to its grandiose plans and policies.

Since Jesus alone is Lord, not Caesar, the state has always had mixed feelings about the church. The more raw power political leaders want for themselves, the more they must run roughshod over the churches. They can do this in various ways, such as banning them altogether; seeking to silence them; seeking to get them to compromise; or seeking to use them as tools of their own agendas.

All tyrannical regimes have to come to terms with the churches. They know that churches are the main opponents to their schemes for more power and control. Shutting churches down or subverting them for their own purposes are some of the ways we have seen this occur in the past century or two.

The communist persecution of Christians and suppression of churches in the Soviet Union and Eastern Europe last century is well known. And the Nazis also had a clear program on how to deal with the churches. That could mean to silence the churches, to dilute the resistance of the churches, or to even use them for their own ends.

I was recently alerted to an interesting report commissioned by the American Office of Strategic Services in 1945. It collected information and evidence for the Nuremberg Trials concerning the Nazi persecution of the churches. It is entitled “The Nazi Master Plan: The Persecution of the Christian Churches.”

Reading this 28-page report is chilling, not just for what it tells us about what occurred 80 to 90 years ago, but because of the many similarities we find with what is happening in the West today. Contemporary secular left governments are quite happy to work with the churches, as long as they go along with their radical agendas.

But those recalcitrant Christians who refuse to bow down to the state and insist upon remaining true to biblical beliefs and values WILL be targeted, persecuted, and eventually shut down. What the Nazis did back then we are increasingly beginning to see in many Western nations today.

This report is found in various places, including here: theantipaschronicles.files.wordpress.com/2017/05/the-nazi-master-plan.pdf

It is worth quoting from it, and I hope that we can learn the lessons of history before it is too late. It says this early on:

“Throughout the period of National Socialist rule, religious liberties in Germany and in the occupied areas were seriously impaired. The various Christian Churches were systematically cut off from effective communication with the people. They were confined as far as possible to the performance of narrowly religious functions, and even within this narrow sphere were subjected to as many hindrances as the Nazis dared to impose. These results were accomplished partly by legal and partly by illegal and terroristic means.” P. 1

“Persecution of the Christian churches in Germany proper gave rise to very special problems. Since Germany was destined to provide the central force for the coming wars of aggression, it was particularly necessary that the German people be withdrawn from all influences hostile to the National Socialist philosophy of aggression. This meant that the influence of the Christian churches would have to be minimized as thoroughly as possible.” P. 3

“The Nazi plan was to show first that they were no foes of the Church, that they were indeed interested in ‘Positive Christianity’, were very good friends of the Churches and did not at all want to interfere in religious matters or with the internal affairs of the different denominations. Then under the pretext that the Churches themselves were interfering in political and state matters, they would deprive the Churches, step by step, of all opportunity to affect German public life. The Nazis believed that the Churches could be starved and strangled spiritually in a relatively short time when they were deprived of all means of communication with the faithful beyond the Church building[s] themselves, and terrorized in such a manner that no Churchman would dare to speak out openly against Nazi policies.” P. 3

Hitler made it clear that church life could continue, but only under the condition that they accepted the Nazi program and offered no criticism of it:

“Under such circumstances, the conference of German bishops, meeting as usual in Fulda, decided on 28 March 1933 to lift all restrictions imposed on members of the Church adhering to the Nazi movement. This opened the door to mass adherence to the Party of practising Catholics. The rush started immediately. All those German Catholics who were inclined to adopt Nazi political views and had hesitated only because of the anti-Nazi attitude of the hierarchy hastened now to join the victorious party of the ‘national revolution’.” P. 6

Consider a treaty, the Reichskonkordat, that was signed in July of 1933. It was a ‘Concordat between the Holy See and the German Reich.’ It was ratified 10 September 1933. At first it seemed to offer a way forward between the two parties. But it did not last long:

During this period, relations between the Nazi state and the Catholic Church became progressively worse. Having gained the support of the Catholic hierarchy in the crucial early days of the regime by signing the Concordat, they took advantage of their subsequently increasing strength to violate every one of the Concordat’s provisions, gradually stripping the Church of all its more important rights. Specific instances of the various phases of this persecution are presented in section V below.” Pp. 7-8

The report discusses the ‘METHODS USED TO IMPLEMENT THE POLICY OF REPRESSION’:

In order to implement their general policy of persecution, the National Socialists interfered at every possible stage in the activities of the Christian Churches. Sometimes they accomplished their purposes by direct intervention of the Reich or Land governments under their control or, in the case of Norway and other occupied but unincorporated areas, by intervention of a native puppet government. At other times they preferred to accomplish their purposes through the use of the SA, the Hitler Youth and other Party organizations.” P. 13

Here are just some of the measures used, as presented in outline form (pp. 13-25):

Anyone who is even remotely aware of the growing anti-Christian bigotry and persecution in the West will see so many ominous parallels here. While the more radical steps, such as murdering clergy are not happening – yet – we see plenty of the others in play. Of course while the same goals are in mind, the means have changed a little.

Just consider how the radical left and its militant sexual agenda is leading the charge here. Increasingly Christians and churches and Christian schools and businesses are being targeted and attacked by means of various equal opportunity and anti-discrimination laws.

I have of course documented countless cases now of Christians, churches and religious institutions being targetted in this way, simply because they will not go along with the radical homosexual and trans agendas, will still defend biblical marriage, will seek the well-being of children by having a mother and a father, and so on. For daring to do that, they are starting to pay a heavy price, be it with heavy fines, loss of jobs, closures, or even jail time.

With the installation of the hyper-left Biden/Harris administration in America, we will see this ratcheting up even more. Forcing Christians to finance abortions, forcing radical sexual ideology on Americans, and pushing even more anti-Christian propaganda in schools and the media will simply be a part of this.

The so-called Equality Act will certainly cause massive problems for the churches. A week ago on the social media American professor Robert A. J. Gagnon said this about how things will likely pan out:

When the “Equality Act” is passed, the following event could result in professors like Robert P. George not merely being attacked in media but, more, being charged with violation of federal “gender identity” “non-discrimination” law. Think about that and ask yourself whether that comports with the view that Trump is/was the great threat to the Republic.

Prof. George was attacked in The Daily Princetonian simply for taking a poll on Twitter that asked: “By listing or stating their ‘preferred pronouns’ people are making sure that others know their: (a) sex, (b) gender, or (c) ideology.” For example, “student Priyanka Aiyer … doesn’t think there can be an ‘academic debate’ about it: “We’re really talking about the existence and the validity of people whose gender is not the same as the one they were assigned at birth.”

These censoring totalitarians make up today’s Dem Party; indeed, they will shortly be ensconced in the White House and rule both Houses of Congress. Before four years are up, they will also have control of the courts. Biden has already told us what he thinks of people who don’t support the totalitarian “Equality Act”: They are “virulent people” and “the dregs of society.”

The Biden/Harris regime will increasingly become a reign of terror for all biblical Christians who choose to stay true to God and his Word, and will not bow down to the Big, Deep State. We better learn from history really quick here.

18 Replies to “Silencing the Churches”