This man is possessed by anti-Christian hatred:

Who leads the way in Australia when it comes to hating on Christians and Christianity – someone who does so regularly, habitually, and as a matter of course? One could think of plenty of likely candidates here. But we can certainly nominate one Victorian politician who has turned anti-Christian bigotry into an art form. 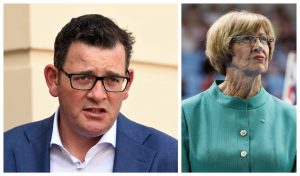 I refer of course to Australia’s most flagrant misotheist and Christophobe, Dan Andrews. This socialist left premier has spent most of his adult life waging war on Christianity and its beliefs and values. The list of his many hateful actions against the faith gets longer each passing month, and I have regularly written about this antichrist leader.

Too often I have had to document his many acts of infamy and villainy over the years. Consider just one such piece: billmuehlenberg.com/2019/02/04/victorian-nero-declares-war-on-christianity/

Whether it is the radical abortion and euthanasia laws he has pushed through; his undying support of the diabolical “safe schools” programs and the like; his promotion of all things homosexual and trans; his attempts to throw into prison praying Christians who dare to help those struggling with unwanted same-sex attraction; and even his war on Christmas carols – to name a few examples – this guy is Pharaoh, Herod and Nero rolled into one.

Just how far can this guy go in his anti-Christian zeal? What has possessed him to keep this war against Christianity on the top of his priority list? Just why does he feel he must personally destroy the faith of millions of Victorians? Needless to say, I would have answers for all of those questions!

But consider his latest ugly outrage: his ongoing war against Australia’s – and the world’s – greatest ever tennis player, Margaret Court. Of course she has been under attack for years now, for the simple reason that she dares to be a Christian, dares to have a church in Perth that is faithful to the gospel, and is committed to standing up for biblical values in a pagan world.

So the hate-filled secular left have been hating on her quite some time, and have even sought to get the Margaret Court Arena renamed in Melbourne. On and on it goes. Their vile poisonous hatred knows no bounds. And Andrews is leading the pack here.

The most recent episode involves the news that she is about to be awarded an Order of Australia honour on Australia Day. That has got Andrews and the other Christophobes foaming at the mouth. As one news item put it:

Victorian Premier Daniel Andrews said he [was] “quite sick” of discussing Ms Court after being asked about the backlash toward her during a press conference on Friday. “I’m quite sick of talking about that person every summer,” he said.

“I do not support that but I don’t give out those gongs, that’s not a matter for me, that’s for others.” Andrews stated Court’s views were “disgraceful and hurtful”, adding they “cost lives”. “Calling out bigotry is always important. This bigoted quackery costs lives.” www.oversixty.com.au/news/news/dan-andrews-outraged-at-margaret-court-s-impending-honour

Dan Andrews just could not contain his irrational hatred. As he said on Twitter: “I don’t want to give this person’s disgraceful, bigoted views any oxygen. But when others insist on rewarding them with this country’s highest honour – I think it’s worth saying again: Grand Slam wins don’t give you some right to spew hatred and create division. Nothing does.”

Good grief. Talk about a deplorable rant filled with falsehoods and furphies. Talk about showing your true colours. For leftist thugs like Andrews, those who dare to hold opposing points of view are NOT allowed to speak. Freedom of speech is only for those who hold the “correct” positions on contentious issues. All others must just sit down and shut up. Thanks for that strong stand for freedom and democracy Dan.

And believing what the overwhelming majority of mankind has always believed throughout human history is not bigotry. To simply affirm the truth that marriage is between a man and a woman is not spewing hate. You are the one spewing hate Andrews. You are the one causing division.

Court has done more good for more people – including homosexuals – than Andrews has ever done. Her church food distribution program alone – which serves everyone without partiality – has provided so much help to so many. Court loves all people and wishes the best for them. She even wishes the best for Andrews and prays for him.

And for Andrews to claim that her views were putting people’s lives at risk was utterly bizarre. Indeed, that is a bit rich coming from a guy who is directly responsible for causing the deaths of over 800 innocent people in his spectacular failure to manage the corona crises and the hotel quarantine programme.

Court is doing all she can to help save people’s lives – physically and spiritually. But all Andrews can do is keep pushing his ugly hatred, animosity and bigotry. What a loathsome political leader he is. As Sky News host Rowan Dean said about his remarks:

“In the petty, petulance stakes, nothing of course could match the spoilt, meanspirited, arrogant, virtue-signally narcissism of the premier of Victoria parading in front of his sycophantic press groupies.” www.skynews.com.au/details/_6225191481001

Of course Andrews was not alone in this hateful, bigoted reaction – there are plenty of other Christophobes out there who have been just as bad in their comments. Hardcore God-hater Phillip Adams was also quick to condemn her: “Margaret Court gets an AC – Australia’s top gong – in next week’s Honours List? Far worse than Bettina Arndt’s AM. Or Tony’s knighthood for the Duke. A disgraceful, shameful, tone deaf decision.”

Lesbian activist Magda Szubanksi was quick to comment: “Largely, to be honest, I think she’s irrelevant. We have marriage equality now. There are still many things that need to be worked on  … but really I think let her wither on the vine.”

And then fake Christian Father Rod Bower of Gosford Anglican had this to say on his infamous outdoor signpost: “When homophobia is honoured everyone s dishonoured.” Give it a rest Rod. One day you will stand before the Lord to give an account of how you have for so long dishonoured God by your apostasy.

Wow, the haters sure are gonna hate. But pride of place certainly goes to Andrews. His demonic contempt for this wonderful woman of God is just so frightful to behold. And he always carries on like this when anyone dares to stand for biblical truth and values.

Just like Bower will one day face the one true and living God, so too will Andrews and his ilk. They need to repent now before it is too late. Keep them in your prayers. They sure need it.

27 Replies to “Australia’s Most Shameless Christophobe”