How very relevant is this period for contemporary believers: 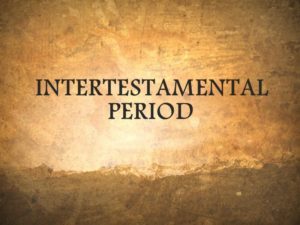 Christians who revere both the Old and the New Testament will want to know something about what occurred in this gap between the two. Here is a rough timeline of the period:

Much can be said about this period, but one aspect I want to focus on here. With anti-Christian bigotry and persecution on the increase in the West, I have been writing a lot lately on how Christians can deal with it, and what we can learn from history. I have written about how the early church dealt with persecution for example: billmuehlenberg.com/2021/01/09/early-christianity-persecution-and-lessons-for-today/

The Jews of the intertestamental period also went through periods of hardcore persecution, so retelling their story can give us some perspective and insight as to how we might proceed. If nothing else, this shows us that there have always been times when the state has waged war on the people of God, and temptations to compromise and give in have always been present.

This historical period and its many rulers, wars and various kingdoms in conflict can get quite complicated. I cannot get into all that detail here. But the timeline above and the recommended reading below can be of real help for those wanting to study this further.

The general background is this: many Jews returned to their homeland after the Babylonian captivity. Various foreign powers ruled during this time, and some treated the Israelites fairly well, such as the Ptolemies. That peaceful period was brought to an end by the Seleucids however.

One Seleucid ruler especially was quite ruthless in stamping out the uniqueness of the Jews and their religion. Most Christians have heard of Antiochus Epiphanes, or Antiochus IV. His rule during the 160s BC is worth looking at in more detail.

A move was under way by the Greeks well before his rule to Hellenise the territories they had occupied, including that of the Israelites. Greek language, customs and practices were heavily promoted, regardless of how they went against the beliefs and values of the Jews. It even included introducing things like the gymnasium and nude sports.

Some Jews resisted all this while others fully went along with it. Many of the wealthy and educated Jews favoured the Hellenisation, while groups like the Hasmoneans rejected it. One priest, Mattathias, and his five sons led the charge in taking on the foreign tyrant. One of the sons, Judas, was given the title Maccabee, which means “hammer”.

They had to act because things had gotten worse. Antiochus plundered the temple in 169 and he took numerous steps to wipe out the religion altogether, including abolishing the Sabbath and food laws, destroying the Scriptures, banning circumcision, and so on. And a pagan altar was set up in the temple in 167. It was dedicated to the Olympian god Zeus. He even had dubbed himself Epiphanes (“god manifest”).

The massacre of many innocent Jews also took place. This three-year reign of terror came to be known as the “abomination of desolation” (confer 1 Maccabees 1:54; Daniel 11:31 and Mark 13:14). Space does not permit me to go into detail about the Maccabean revolt, but some inspiring and remarkable actions took place in their fight for religious and then political independence.

The point to note here is many Jews compromised and capitulated and went right along with this. They saw the Hellenization of their territory as a good thing. Hellenist high priests had even been set up. But the true, devout Jews would have none of this. Resisting the state and its encroachment on their religious and national life was a matter of duty.

In sum, there were some Israelites who were happy to go along with the powers that be, while others felt the need to resist – even by means of force of arms. Guerrilla warfare and other forms of resistance took place, and by 164 an independent Jewish state was finally established.

As mentioned, I discuss all this because increasingly the church in the West is facing similar sorts of things. The world is working overtime to squeeze the church into its mould – the very thing Paul warned us against (Romans 12:2). Instead of Hellenization we have secularisation and all that goes with it: ungodly immorality, pagan beliefs and practices, syncretism, relativism, identity politics, woke and cancel culture, and so on.

In all these areas Christians are under great pressure to conform and to compromise their faith. Indeed, just yesterday I penned a piece which mentioned one young American gal who proudly claims to be a Christian, but also proudly strips for money before strangers online. Talk about a fully compromised and bastardised faith: billmuehlenberg.com/2021/02/03/the-rising-tide-of-truth-decay/

So Christians today in the West need to think long and hard about how they will cope with the increased pressure to abandon their beliefs and compromise their practices. Whether it is caving in to the radical homosexual and trans agendas, falling for the bogus interfaith movement, or fully succumbing to the ominous Great Reset – to name but a few – Christians need to decide now if they surrender or resist.

Will we be modern-day Maccabees who resist (at least in principle – not necessarily with force of arms) the growing paganisation of our culture and the strong steps being taken to bring the churches into line? Or will we just capitulate, compromise, and effectively deny our faith in order that we can just get along and not suffer any persecution? The choice is ours.

Let me close with two quotes on these matters. The first comes from a volume that might not seem to be fully relevant here, but it in fact is. In his new commentary on Ecclesiastes and the Song of Songs (SGBC, 2020), George Athas often speaks to the period of Antiochus IV Epiphanes as the backdrop to both biblical books, especially the latter.

Given that he is now working on an entire volume about all this – Bridging the Testaments – the bits he mentions in his commentary are worth drawing from. Here is just one such quote:

It is difficult to capture how close conservative Judaism came to complete collapse at this time. Both the internal cultural pressure of progressively minded Hellenists and the external legal pressure of the ruling authority subjected faithful conservative Jews to a virtually impossible decision: abandon conservative commitment to Yahweh or die. There were many social and economic advantages in such compromise. Just as a life of wealth and prestige awaits the woman in the Song if she marries the king, so survival and progress awaited conservative Jews if they adopted Hellenistic values and fell into line with Antiochus’s decrees.

Hmm, sounds all very familiar to what we find happening today with Christians in the West, does it not? Another quote provides a helpful application of all this. It is something I saw online a few days ago by Professor Robert Gagnon:

It is sacrilegious for the people of God to refer to a person by pronouns or gender-specific names that are at odds with that person’s biological sex. So we cannot bow to the social media tyrants to do otherwise. To do otherwise is to give up the store by acknowledging that which cannot be acknowledged without offending against the Creator. The sooner Twitter and Facebook realize this, the better things will be all the way around.

The Jewish martyrs during the persecution of Antiochus IV were killed even over a matter of diet (not eating pork). They refused to betray the ancestral laws while they were under the jurisdiction of the laws of Moses. As Christians, we are not under that jurisdiction, but we are under the law of Christ and the united witness of Scripture across both Testaments on this matter; and the teaching of Jesus on a male-female foundation for marriage.

We are not being confronted with torture unto death and yet some Christians (to the shame of the Church) are already collapsing when social pressure is being placed on them. And some are even capitulating without any penalty coercing them. I will never call a man a woman or a woman a man. I will never use false pronouns that convey to others that I accept the abhorrent practice of transgenderism. Because I love persons with gender dysphoria, I will not demean them by their biological sex, stamped on them by the Creator, as of no account.

And a few New Testament titles that can be consulted include:

3 Replies to “Between the Testaments – Lessons for Today”