What can we learn from persecution in the early church?

Only those with spiritual myopia or who are living in a fantasy world can not see what is happening all around the West: a flood of anti-Christian bigotry and persecution is being unleashed, and we have yet to see just how much worse it will get in the coming days. 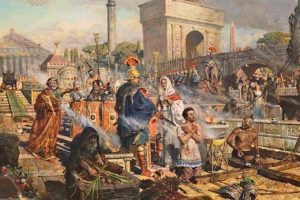 As such, I have been writing a lot lately on this issue of persecution, and how believers might respond. A number of those recent articles have been based on the important new book by Rod Dreher. Here is one of those pieces – a review of his must-read volume: billmuehlenberg.com/2020/12/30/a-review-of-live-not-by-lies-by-rod-dreher/

In writing these pieces, one friend has been asking me to recommend some book titles on how the early church dealt with persecution. He is taking these matters seriously, and wants to be as well-equipped as he can be for what lies ahead. Well done Paul for thinking along these lines.

So this article is in part a response to his concerns. I will offer some brief commentary on the situation with the early Christians and then present a recommended reading list at the end of the piece. Let me draw upon two main resources here.

First, Laurie Guy has a chapter on the persecuted church in his Introducing Early Christianity. He offers some broad considerations to be aware of. He writes:

The reality is that persecution was typically local rather than empire-wide. The reason persecution was not universal is that so much of it, especially in the first two centuries of the church, was the result of mob pressure stirring local governors to action, rather than the result of direct imperial policy. The death of Jesus highlights the role of the mob. . . . In its first two centuries Christianity was a relatively tiny sect, seldom the focus of rulers who had multitudes of concerns. Persecuting Christians fell at the lower end of imperial priorities.

He goes on to speak about the rationale for the persecution:

A major concern for non-Christians was the so-called atheism of the Christians. Popular understanding held that gods needed visible representations. Worship of an invisible god was virtually “atheism” – worship of no god at all. This impiety was particularly serious because of the sense of social solidarity and the need for society to behave in a way that would keep the divine powers happy – a vital concern because the gods controlled the events of the world.

Their unwillingness to sacrifice was another problem:

It was their stubborn exclusivity that endangered others. If only they would show tolerance and appropriate respect to the gods, they might well be able to keep their distinctive faith without persecution. Not only, however, did Christians cause offence by failing to sacrifice, they also openly broke with society, provocatively repudiating previous religious obligations in their baptismal pledge to renounce Satan and his pomp and his angels. Christians were therefore to blame when the world went wrong….

Christianity presented a threat not only to social relationships but also to the well-being of the state itself. Emperors were never free of the possibility of coup, overthrow or assassination, and were therefore always nervous about permitting groups that might turn out to be subversive….

Persecution and lack of legal recognition forced Christianity to operate in semi-underground fashion in private homes. This fuelled suspicion as to the subversive nature of Christianity….

At first the church was just a flea bite on the sprawling back of the empire. It is significant that only as Christianity grew (though still a small minority) and became more prominent in the third century, did the empire make comprehensive efforts to suppress it….

At the beginning, persecution largely resulted from popular prejudice. Later it became an issue of the state’s well-being. In both contexts there was a rational explanation for the persecution. The “atheism” of the Christians imperiled a society that held to a pax deorum (peace of the gods) worldview and the solidarity of Christianity made it a threat to imperial rule.

Secondly, Robert Winn, who has a number of chapters on persecution in his book, reminds us that not all Christians stood strong – many capitulated and compromised unfortunately. He mentions the third century Emperor Decius who “insisted that all people in the cities of the empire join him in sacrificing to the gods. Local officials in each city would certify that each inhabitant had made the sacrifice and provide a certificate verifying the sacrifice. Many Christians, including many clergy, decided to obey the imperial command and sacrifice.”

(Let me interject here and say that while the two are rather different, I could not help thinking about today, and the push being made by so many for things like mandatory vaccinations, vaccine passports and the like – all for the social good of course.)

The Bishop of Carthage, Cyprian was quite concerned about all this capitulation:

What disturbed Cyprian most was that these Christians had not even been threatened with torture or imprisonment. Their sole reason for complying so quickly was to maintain their status and wealth. They could have abandoned their possessions and property and fled, as some Christians did, and thus avoided being put in a position to have to make a sacrifice or face prison, torture, and death.

He goes on to discuss the challenge that church leaders faced over all this. What should the church do about these lapsed believers? Could they be returned in good standing in the church? Had they sold their souls too much to be taken back in?

How far can we allow believers to compromise and even renounce their faith? What is more important: the purity of the church or the unity of the church? These and other important questions require another full article to do justice to, so stay tuned.

But you can see that some of the issues the early believers faced are not all that dissimilar to what Christians in the West are now increasingly facing. More and more we will have to decide if we remain true to our faith, or give in and submit to any and all dictates of the expansive state – no matter how much they put us at odds with our own beliefs and practices.

As I was about to post this, I noticed that the heavy-weight leftist tech giants are ganging up on those who dare to differ. Google and Apple are banning Parler, a newish social media site which conservatives and Christians have been flocking to in order to avoid all the censorship and bigotry of Facebook and Twitter, etc: www.wsj.com/articles/apple-threatens-to-ban-parler-from-app-store-11610148297

Many folks are now rightly warning that a Democrat-controlled Presidency, Congress and Senate will mean a major crackdown on all of us dissidents. See these four new pieces for starters:

And as if to further and conclusively prove my point, an important new book on these very troubling tech tyrants that was due to be released has just been pulled by a major American publisher. See the story here: www.toddstarnes.com/cancel-culture/simon-schuster-cancel-sen-josh-hawleys-book-contract/

It seems that things are getting worse by the moment. From a human point of view, it looks like the darkness just keeps on getting darker. We need to hang on to God and his Word more than ever. One American friend just alerted me to a Christian band and a song that I was not aware of. The song is “With Him”. It begins with these words: “Looks like stormy weather forever, and we’ll never see the light again.” Thanks Eddy.  www.youtube.com/watch?v=04y_KfO7GzI&fbclid=IwAR3snSmM2RATxqVQqO1ILx5RMiLxywP_pz1RjqxzztK3tJuHoa-XNUU5hoI

For many of us right now it really does seem like the darkness has become permanent. Everywhere we look we see the enemy moving, with one defeat after another seemingly occurring. As we read in C. S. Lewis’s book, The Lion, the Witch, and the Wardrobe: “‘It is winter in Narnia,’ said Mr. Tumnus, ‘and has been for ever so long…. always winter, but never Christmas’.”

But there is always hope because there is always God. I close with the words I just came upon in Genesis 31:4-5 “So Jacob sent and called Rachel and Leah into the field where his flock was and said to them, ‘I see that your father does not regard me with favor as he did before. But the God of my father has been with me’.”

This can be altered a bit and applied to the situation today: “I see that American and Western leaders and elites do not regard us with favor as they did before. But the God of our father is still with us.”

What to read on the early church

There are at least three sorts of books one can read in this regard:

-Any church history volume that covers the sweep of two millennia of Christianity;
-Books that focus on just the early centuries of the church;
-Books that examine persecution in the early church.

Here I will offer some select volumes from the last two categories. Many more volumes could be mentioned, but these are some of the better ones:

12 Replies to “Early Christianity, Persecution, and Lessons for Today”