How should we think about suffering as things darken all around us?

As things in the West get darker each passing day, it is to be expected that Christians will cast their minds to things like biblical prophecy and how we might understand where all of this is heading. Are we living in the last days? Is Christ coming at any moment? Is this or that character the Antichrist? Has all this been predicted by Scripture? 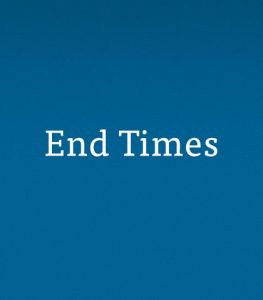 These and other questions often arise at times like this. But before weighing into some of this, let me say a few things first. Here is a dilemma I often have: at times I very much feel I need to write on a particular topic, but I know that if I do all hell will likely break out because some Christians can be so obsessed with their fav view on things that they will go to war if you dare to offer a somewhat different take on things.

No, I am not talking about things like saying Trump is the Messiah, or Trump is the Antichrist. Both those topics would quickly result in major fireworks. But here I am referring to certain aspects about the end times. Eschatology is often a controversial area, since there can be so many opposing views that one can hold to, and some believers really do not like it if their views are challenged by others.

I too have been guilty of this in the past, holding on to one particular view, and denouncing all other folks as heretics and worse. I was quite convinced that my views were the only correct ones, and everyone else needed to be brought into line – or else!

But hopefully I have matured a bit over the years and I have learned that there are other legitimate views that one can hold on these matters, including how one interprets Revelation, or what one’s take on the millennium is. As to the former, see the various options here: https://billmuehlenberg.com/2018/12/26/bible-study-helps-revelation/

As to the latter, see some of the options here: https://billmuehlenberg.com/2010/11/30/on-the-millennium-part-one/

So I no longer ferociously hold on to views about a pre-trib rapture and dispensationalism and so on. Indeed, I can fully respect most other views now, and see that there is biblical and theological merit in many of them. I have not denied the faith for having shifted my understandings on these matters. I have just grown a bit over time, and have learned that there is some room to move here.

Let me note that I really do not want this piece to become another battleground. And I actually do not need to be taught about these things. As I say, I was an avid believer in these matters earlier on, and in many respects was a bit of an expert, having taught them for many years. So there is no need to come here to “correct” me or to teach me what these beliefs are all about thanks.

Also, I believe it can be a fair question to ask why people cling to certain beliefs. When it comes to this issue, it may well be that careful study and reading has led folks to those conclusions. Fair enough. If you think dispensationalism and a pre-trib rapture are the best understandings of Scripture, fine. Go for it.

But I realise that not everyone does carefully study and research on these matters. For various other reasons they may just adhere to such teachings without having done a lot of homework. And we have to be honest here: for some believers at least, they simply do not want to suffer, and a pre-trib rapture belief helps them a lot.

Sure, no one wants to suffer. I don’t. But I ask: Is it possible that for some folks at least, they avidly run with a view like this, not because they have so thoroughly studied it and rejected all the other options, but because it gives them some comfort to know that they will not go through some tribulation period? That is a fair question, and one that I think we can all ask of ourselves – not just on this matter but on others as well.

In this regard, I have shared before a quote from Corrie ten Boom, the Dutch woman who suffered so greatly under the Nazis. No, she is not infallible, so she could be wrong here. But I believe what she and the Chinese pastor have said at the very least need to be taken seriously. The quote is this:

There are some among us teaching there will be no tribulation, that the Christians will be able to escape all this. These are the false teachers that Jesus was warning us to expect in the latter days. Most of them have little knowledge of what is already going on across the world. I have been in countries where the saints are already suffering terrible persecution. In China, the Christians were told, “Don’t worry, before the tribulation comes you will be translated – raptured.” Then came a terrible persecution. Millions of Christians were tortured to death. Later I heard a Bishop from China say, sadly: “We have failed. We should have made the people strong for persecution, rather than telling them Jesus would come first. Tell the people how to be strong in times of persecution, how to stand when the tribulation comes – to stand and not faint.” I feel I have a divine mandate to go and tell the people of this world that it is possible to be strong in the Lord Jesus Christ. We are in training for the tribulation, but more than sixty percent of the Body of Christ across the world has already entered into the tribulation. There is no way to escape it. We are next. endtimepilgrim.org/corrie.htm

I would not refer to them as false teachers as she does. But my point again is this: Yes, it is possible that the rapture folks are correct. But it is also possible that they are not correct. And if there is no such thing as believers being whisked away before a time of great suffering, then the question is: will you be able to cope? Will your faith take a beating if it turns out your views on this were incorrect? I think these are fair and honest questions to raise.

One further point I can mention here ties much of this together. I recently saw this exchange on the social media. It actually was under a post of mine in which I asked if God might be withdrawing his hand of protection from America and the West. That is another fair question to at least consider. The brief exchange was this:

Guy: Pre-trib. We’ll be out of here before long.
Gal: What if you’re wrong?
Guy: I stand by the word of God. Thats what is written, so that is what will pass.

Some interpretations are way off the mark, while some are closer to the truth. But no one has an infallible and perfect understanding of the Word of God – no one. We are all finite, fallen and sinful – even as believers – so we are always likely to get some things wrong. Therefore humility is one of the first and most important virtues all believers need to have, certainly when it comes to studying Scripture.

We ALL see through a glass darkly, as the Apostle Paul put it. We all have partial and fallible understanding of everything, including what the Bible teaches. Yes, we can and should have a high degree of certainty and assurance about key biblical doctrines. We can strongly affirm crucial teachings such as the deity of Christ and his atoning work on the Cross.

But on secondary doctrines – such as one’s pet beliefs on various eschatological theories – we need to hold things a bit more lightly. There are legitimate and sound biblical reasons why Christians will hold to various different eschatological views.

Just because they happen to differ from you does not necessarily mean they are stupid, the spawn of Satan, or have a low view of Scripture. Their study and reflection have taken them in somewhat different directions than that of others. That too is fair enough.

Once again – based on my past experience – I must implore you: this article really is not meant to lead folks to come here and bash each other up as they push their favourite end-times theories and positions. That was not the main point of this article.

The main point was to say that there can indeed be some room to move on these various issues, and we need to extend some Christian grace to others who may have a different understanding than we do. That is mostly what I want to convey here. I do not want yet another gung-ho debate on the rapture, or the millennium, or what have you. There are plenty of other places where people can argue these matters to their heart’s content.

No, this does not mean I dislike debate, am afraid of letting other viewpoints through, or am censoring things. There is a time and place for proper debate. Here I am just raising a few questions and offering a few thoughts. So please take it in that spirit thanks. As such, feel free to express your thoughts on this, but please no angry arguing, seeking to convert me or others to your preferred views on these issues thanks.

And for those who want to see some of the many good books on all this, see this somewhat older bibliography featuring nearly 100 titles: https://billmuehlenberg.com/2012/11/10/recommended-reading-on-eschatology/

18 Replies to “Tribulation, Suffering and the Believer”