Some reflections on what is now happening in Washington:

For those not aware, some violent protests have erupted in Washington D.C., in part over the Georgia runoff elections in which it appears that two radical Democrats have won, putting the US Senate into the hands of the Democrats. They and the Republicans now both have 50 senators for the next two years, giving Democrat vice-president Kamala Harris the tie-breaking vote.

Of course if you rely on the leftist mainstream media you will get a decidedly one-eyed and blurry-eyed account of what has been happening there. The message of the left and their media sycophants has always been the same: ‘Trump and his supporters are evil, dangerous fascists who are a threat to democracy. This protest simply proves that they are out of control, and we must do all we can to make sure they never again are given any power or influence in American political life.’ 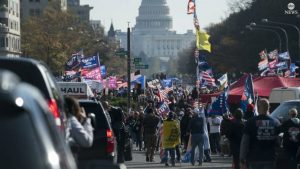 Needless to say I reject that radical spin. Plenty of commentary already exists on what is still unfolding in the nation’s capital. Here I offer some quick thoughts on the situation there, as well as the bigger picture. It includes political, social and spiritual reflections. I follow that with the thoughts of some other commentators. Here are my main seven thoughts on this:

-I of course do not endorse or condone violent protests and rioting – whether over election results or for any other reason. But there are numerous reports of at least some radical leftists being involved in what has happened at the Capitol Building that need to be looked into and not dismissed out of hand.

These reports are buttressed by many eye-witness accounts. This includes participants who witnessed Antifa and other militants exploiting the situation – even being bused in to foment trouble. And Trump of course has already called for the demonstrators to go home.

-For four years now the very same folks denouncing what has just happened in Washington have been promoting and excusing and encouraging violent protests over the election results of 2016. Cities have been burning all around the nation, yet the media pretended it was not happening. The lamestream media is of course up to its ears in this hypocrisy, as are far too many others.

-If, as it appears, the radical Democrats (the most radical bunch in US history), now will control the White House and both houses of Congress, we can rightly ask if this is the end of the land of the free and the home of the brave. Can America really survive much longer?

Everything we have feared will inevitably and exponentially ramp up: the war on the Constitution; the persecution of Christians and conservatives; the radical left takeover of the courts; the slaughter of the unborn; the diabolical sexual tsunami; the war on marriage and family; the rewriting of history; and much more. The outlook is exceedingly bleak.

-As such, Never-Trumpers have a lot to answer for. Indeed, they may even have blood on their hands. Those who call themselves Christians and conservatives may now rejoice in what they have brought about (ensuring Trump is given the boot), but any shortcomings of Trump will pale in comparison with what we will now witness in the US. Sure, these folks may feel really good about themselves, and pat themselves on the head thinking they have kept themselves politically “pure” – but at what price?

And any claims by them that they did not want the Dems to get in ring hollow. There were only ever two real choices: these Trump haters with a bad case of TDS knew full well that if they were going to oppose him in every way possible, there could only be one outcome: a win for the Democrats. There never was some third option. It was Trump or the radical left in charge for the next four years – end of story.

-In nearly seven decades of life, I have never witnessed such out of control darkness descending upon America and the West. I have been observing things for a long time now, and this is the worst it has ever been in my lifetime. It breaks my heart to see all of this happening.

-Spiritually speaking, we may well be witnessing the withdrawal of God and his protection from this once great nation. The sins of the land cry out for judgment, and most churches have been part of the problem instead of the solution. Widescale repentance is our only hope. As such, all I can do now is cry out to God: “Lord, have mercy, and give us all grace to endure the spike in demonic darkness that surely lies ahead.”

-My hope cannot be in politics or in a political messiah. No man and no party – no matter how good – can ultimately save us from the disaster we find ourselves in. Only God can get us out of this mess. And the truth is, things may get a whole lot worse before they get any better. But God will always be my hope. He is my light in this overwhelming darkness that we find ourselves in.

Let me close with three comments by others. The first two remarks were found on the social media. Robert A. J. Gagnon said this:

With the likely election of two hard-Left Dems as Georgia Senators we now see even more vividly the folly of Never-Trump and Biden-supporting leaders from among Evangelicals and conservative Catholics. Now the First-Amendment-destroying “Equality Act” will certainly become law; and all court appointments will be hard Left. Should Clarence Thomas have to leave the Court within the next 4 years (or the Dems are successful in packing the court), their victory will be complete. The negative impact of the “Equality Act” will be with us for the rest of the century and beyond (until Christ returns), affecting with draconian intrusive state policies generation after generation of believers who will be increasingly oppressed. And still we will hear no admission of guilt from these same Christian leaders.

And Don Feder reminds us that we must keep fighting:

We are defined not by our victories, but how we handle defeat. As Churchill said, “Defeat is never fatal. Victory is never final. It’s courage that counts.” There’ll be plenty of time for post-Georgia postmortems. For now, we can wallow in self-pity — throw up our hands and say America is lost — or roll up our sleeves and figure a way out of this mess. The oh-woe-is-me conservatives will say Democrats stole another election, so there’s nothing we can do. (Truth be told, thanks to Stacey Abrams, they had a better ground game, and too many conservatives, infected with defeatism, sat it out.)

After Pearl Harbor, imagine Nimitz and Halsey saying: They have more aircraft carriers and better fighters and dive bombers. What can we do? The Japanese now control most of Asia. What can we do? Their ally, Hitler, controls all of Europe, except for England. What can we do? (What we did was the Doolittle raid, Midway, the Coral Sea and the Island hopping campaign from Guadalcanal to Tokyo Bay.) As Don Corleone says after he slaps a weepy Johnny Fontane, “You can act like a man!”

Finally, an article by Edward Welsch on “The Long March Ahead for the Real Right” is worth quoting from, offering a look at the way forward:

Our faux right is used to playing a theatric oppositional role. They have long been the Washington Generals to the left’s Harlem Globetrotters—“beautiful losers,” in Francis’s phrase. The electoral battles are a distraction to the governmental managers—that cadre of the permanent bureaucracy that is called the Deep State—who are eager to drop the pretense of representative government and get back to managing their subjects.

And manage they do. This new class justifies its position by either magnifying existing threats to the public or inventing them out of whole cloth to keep up demand for their services. A whole slew of scientists, economists, social service workers, and bureaucrats are on hand to save us from the wretchedness of global warming, the calamities of COVID, the perils of white privilege, and the ruin of systemic racism.

The therapeutic managerial ideology is based on the idea that the American people, especially the Middle Americans of red states, need to have their mentality reformed. The therapists must root out any last vestige of ethnic preference or resistance to foreign immigration, which, in the case of those of European ancestry, is to be considered racism. This group of social inferiors also need to abandon any commitment to Christian morality, which is to be called intolerance, particularly resistance to the normalization of homosexuality or of the gender dysfunction known as transgenderism. And they need to drop any resistance to the globalist neoliberal and neoconservative consensus, which sends their jobs overseas and their sons to die in pointless wars abroad. This opposition is to be demonized in the one case as socialist, and in the other as unpatriotic.

The genie of the managerial revolution is not likely to be put back in its bottle. Fortunately, however, the “woke” anti-white, anti-Christian, anti-American ideology that marks our managerial class is not a necessary feature of this revolution. It is there because the cultural right adopted a doctrine of laissez-faire, limited government, while the cultural left went on to seize the reins of power uncontested and to define the managerial elite’s woke ideology.

This fight is not over—because the real right has not yet begun to fight. If there is to be a single aim for a post-Trump right, it should be to contest the present managerial class’s cultural influence over our society. We must make our own march through the institutions of government and education. With the blessing of Providence, we may be able to expel the “woke” ideology that now divides the American people and to enshrine a new unifying creed: one nation, under God. www.chroniclesmagazine.org/the-long-march-ahead-for-the-real-right/

God have mercy on America and all of us.

43 Replies to “Some Thoughts on Washington”