Who is the number one promoter of New Age philosophy in the world today? Is it Eckhart Tolle? Rhonda Byrne? Dan Brown? Marianne Williamson? Nope. The numero uno New Age evangelist is by far Oprah Winfrey. When Oprah says jump, people ask, ‘how high?’

Unquestionably, Oprah Winfrey is the most influential woman in the world today. The television show host, author, publisher, actress, philanthropist, and media personality is a multi-millionaire, and when she speaks, people – especially her legions of dedicated female followers – consider her utterances to be almost divine revelation.

The Oprah Winfrey Show is seen by some 46 million viewers each week in the United States and is broadcast around the world in 134 countries. Her O magazine, which first came out in April 2000, has a monthly circulation of 2.65 million as of late last year. And her Oprah.com website averages more than 6 million users a month. All in all she has a lot of clout. 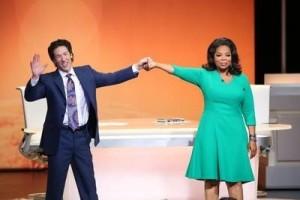 Consider further her website – it is a sort of God Central. It is as if one is in touch with the Almighty. Everything necessary for life, happiness and peace can be found on the site. There are sections on health, relationships, spirit, money, food, sex, and more.

Take one interesting post: “The Top 20 Things Oprah Knows for Sure”. In it are some certainties that you can count on. Number two says, “You define your own life. Don’t let other people write your script.” Similar to it is her sixth point: “What you believe has more power than what you dream or wish or hope for. You become what you believe.”

This is of course typical New Age mumbo jumbo. The idea is we create our own reality by positive thoughts and an upbeat attitude. Life is simply a script and you are the script-writer. Reality can be whatever you want it to be. You creatively visualise what you want in life, and presto sazzo, you get it.

You see, all this is possible because you in fact are divine. Since you are God, then of course you can call all the shots. You are the centre of the universe, and what you want is what you get. It is all a very me-centred gospel. But given your own divine nature, her seventh point seems a bit odd: “If the only prayer you ever say is thank you, that will be enough. (From the German theologian and humanist Meister Eckhart.)”

But just who are we supposed to say thank you to? As it turns out, we of course have no one else but ourselves to thank. After all, we are divine – although most of us don’t realise it yet. So when you wake up in the morning, simply say, “thank you self!”

So where is Oprah getting all this foolishness from? Well, it is all standard New Age fare. Indeed, I used to promote this same stuff, back in my BC (Before Christ) days. I was into the New Age Movement (NAM) big time before I became a Christian. So all this is familiar ground, and it has been around for a while.

It is just that the New Age hucksters have gotten even more popular and persuasive now, in no small measure due to Oprah’s promotion. Consider just three of many NAM books which have sold like hot cakes because of Oprah’s endorsements.

One popular book, often described as the “Bible” of the New Age Movement, is the 600+ page book, A Course in Miracles. It was written in 1965 by a Jewish atheist psychologist Helen Schucman (1910-1981).  She claims to have channeled messages from a New Age Jesus who would show us how to thrive in difficult times. Interestingly the last two years of her life were characterised by deep and chronic depression.

The three-volume work contains gems of wisdom such as this:
-“God himself is incomplete without me.”
-God is simply “a nonphysical love force that is neither vengeful, judgmental, nor punishing – only loving and forgiving”.
-“The world you see is an illusion of a world. God did not create it.”
-“Sin is the grand illusion.”
-“My sinlessness protects me from all harm.”
-We are to make this claim for ourselves: “I am the light of the world.”
-“The name Jesus is the name of one who was a man but saw the face of Christ in all his brothers and remembered God.”
-“You are one with God. Again, how simple is salvation? It is merely a statement of your true humanity.”
– “My salvation comes from me.”

Anyone even remotely familiar with the New Testament and the teachings of Jesus can see that this has nothing at all to do with Biblical Christianity. This is simply the counterfeit Christ of the NAM.

Australian-born author Rhonda Byrne is another New Ager who has been tremendously helped by Oprah’s plugs. Her book, The Secret, has also sold quadzillions of copies, and is equally full of New Age baloney. The gist of the book is you get what you want. Name it and claim it. Hatch it and catch it.

And like all New Age hokum, we can do all this for the simple reason that we are God. Yes we are in fact the centre of the universe. Consider the closing paragraph to her book. It’s a real zinger:

“The earth turns on its orbit for You. The oceans ebb and flow for You. The birds sing for You. The sun rises and it sets for You. The stars come out for You. Every beautiful thing you see, every wondrous thing you experience, is all there, for You. Take a look around. None of it can exist, without You. No matter who you thought you were, now you the Truth of Who You Really Are. You are the master of the Universe. You are the heir to the kingdom. You are the perfection of Life. And now you know The Secret.”

Wow, and there I was having troubles getting my car started this morning. Gee, as the centre of the universe, I guess it’s goodbye to burnt toast, indigestion, and global warming. Thanks Rhonda! For more on The Secret see my other two write-ups:
billmuehlenberg.com/2007/05/23/nothing-new-about-%E2%80%9Cthe-secret%E2%80%9D/
billmuehlenberg.com/2007/05/24/a-review-of-the-secret-by-rhonda-byrne/

A third New Age heavyweight who has also benefitted enormously from the promotions of Oprah is of course Eckhart Tolle. His The Power of Now (1999), and A New Earth (2005) are mega-best sellers thanks to the O factor.

For example, in March 2008 a half million people from 140 nations joined with Oprah for a cyber-class featuring Tolle. The interactive event was one of the largest in Internet history. A New Earth has been selling over 3 million copies a month, and had made it to amazon.com’s number one spot.

Tolle offers more of the same foolish NAM claptrap. Consider a few nuggets from Tolle:
-Jesus came to “show us the Christ Consciousness that he had, and that that consciousness abides with all of us”.
-“The good news is you can free yourself from your mind…. The good news is, if you can recognize illusion as illusion, it dissolves.”
-“All things are vibrating energy fields in ceaseless motion.”
-“Aligning yourself with the Now is aligning yourself with universal purpose, the purpose of the whole. What is the purpose of the whole? The birth and flowering of consciousness. The whole then guides you in whatever you think or do.”
-“Awareness is the power that is concealed within the present moment…. The ultimate purpose of human existence, which is to say, your purpose, is to bring that power into this world.”
-“We need to understand that heaven is not a location but refers to the inner realm of consciousness.”

This is all par for the New Age course. But the real trouble is, with all this promotion of the NAM, Oprah also claims to be a Christian! Yes, she tries to reconcile all this NAM silliness with biblical Christianity. How can she get away with this? Easy, she simply rescripts the Bible and Christianity to mean just what she wants it to mean.

Indeed, she describes herself as a “freethinking” Christian. That’s for sure. Thus she has said, “Spirituality for me is recognizing that I am connected to the energy of all creation, that I am a part of it – and it is always a part of me.”

This is how she describes her understanding of the mission of Jesus: “Jesus came to show us Christ’s consciousness… One of the biggest mistakes we make is to believe there is only one way. There are many diverse paths leading to God.”

She of course is not promoting the Jesus of the Bible, but a deceptive false gospel. Consider what she has said about promoting A New Earth: “Being able to share this material with you is a gift and a part of the fulfillment of my life’s purpose … it was an awakening for me that I want for you too.” She is an evangelist alright – an evangelist for a false gospel which is leading people away from God, not to him.

Jesus warned that many false Christ’s and false prophets would come, seeking to deceive even the very elect. And Paul warned about those who “are false apostles, deceitful workmen, masquerading as apostles of Christ. And no wonder, for Satan himself masquerades as an angel of light” (2 Cor. 11:13-14).

The truth is Oprah is not a prophet of God. That should have been obvious when late last year she made newspaper headlines about her tremendous difficulties in keeping the pounds off. I don’t know about you, but if she was God, I would have thought that trimming a few kilos would not be a major hurdle in life.

But such is the nature of false gospels: they make all sorts of grandiose claims and offer you the world, but at the end of the day, they are not even good enough for keeping your weight down. Well did John warn, “Do not believe every spirit, but test the spirits to see whether they are of God; for many false prophets have gone out into the world” (1 John 4:1).

26 Replies to “The Gospel According to Oprah”