Good news folks! For all those who love their sin and want complete Biblical justification for it, helpful publishers are now quite happy to produce the Bible that fully condones and justifies your sin. Yep, if you are into adultery, you can now read in the comfort of your own home the new Adulterers’ Bible.

Or is fornication your thing? No probs, we now have just for you the Fornicator’s Bible. Do you enjoy a bit of theft? Hey have we got the Bible for you: check out the new Stealer’s Bible. Is lying a pet sin of yours which you would love to stop repenting of and start enjoying? Then the Liar’s Bible is just what you need. 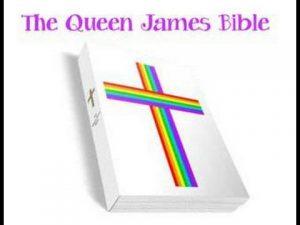 Do you really think God is a figment of your imagination, but want a Scriptural source to promote this? Great, the Atheist’s Bible is just the thing for you. And have you always been a bit keen on kinky relations with your pet, but felt that it may not go down well in religious circles? No problems – just buy and enjoy the New Revised Bestiality Bible.

Have you always wanted to cheat on your tests and not worry about honesty and morality? Then go down to your fav bookshop and get a copy of the Cheater’s Bible. And if you can’t resist going out and shooting anyone who rubs you the wrong way, then the Killer’s Bible is for you.

Now, do any of these Bibles actually exist? Well no, but they might as well. You see, a group of militants have actually produced the exact same thing, but to help all those who love sodomy, and who want a Biblical warrant for it. I kid you not. Indeed, don’t take my word for it. Look it up here: www.amazon.com/gp/product/0615724531/ref=cm_cr_dpvoterdr?ie=UTF8&tag=qjv-20#R1X185P1HC4CPS.2115.Helpful.Reviews

Amazon is quite happy to actually sell this blasphemous, heretical, and filthy piece of trash. Here is how they advertise the volume:

A Gay Bible
The Queen James Bible is based on The King James Bible, edited to prevent homophobic misinterpretation.

The Queen James Bible seeks to resolve interpretive ambiguity in the Bible as it pertains to homosexuality: We edited those eight verses in a way that makes homophobic interpretations impossible.

Who is Queen James?
The King James Bible is the most popular Bible of all time, and arguably the most important English language document of all time. It is the brainchild and namesake of King James I, who wanted an English language Bible that all could own and read. The KJV, as it is called, has been in print for over 400 years and has brought more people to Christ than any other Bible translation. Commonly known to biographers but often surprising to most Christians, King James I was a well-known bisexual. Though he did marry a woman, his many gay relationships were so well-known that amongst some of his friends and court, he was known as “Queen James.” It is in his great debt and honor that we name The Queen James Bible so.

A Fabulous Bible
The QJB is a big, fabulous Bible. It is printed and bound in the United States on thick, high-quality paper in a beautiful, readable typeface. It is the perfect Bible for ceremony, study, sermon, gift-giving, or simply to put on display in the home or Church.

There you have it folks. Now we have full-scale perversion Bibles on the market. And of course the entire premise of this is completely false. They could not be more wrong if they tried. Their entire case is on the supposed fact that no Bible until recently even used the word “homosexuality”.

Wow, that really has me worried. I guess we must now completely revise our theology and ethics – not. What these deceivers do not tell you, or are too clueless to even be aware of, is that the English word “homosexuality” was never even used until a hundred years ago. So of course no Bible had the term – it never existed until last century!

This is simply the most lame and most idiotic argument yet coming from the theological revisionists. They just do not have a leg to stand on, and are clutching at straws big time. The truth is, there are all sorts of terms found in modern translations of the Bible that never appeared earlier for the simple reason that they did not exist until recently.

Paraphrases especially may well use contemporary terminology to convey ancient truths. This does not diminish the truth of the original texts of course – not one iota. It simply is about giving old Biblical passages new relevance by using more modern terms.

And the issue is not what a contemporary English term says or when it was coined. The issue is what do the original languages of the Bible say. What do the Hebrew Old Testament and Greek New Testament in fact say? That is the real issue here. And those passages in question all quite clearly refer to what we today refer to as homosexual acts.

Consider just one such passage, 1 Timothy 1:9-10: “We also know that law is made not for the righteous but for lawbreakers and rebels, the ungodly and sinful, the unholy and irreligious; for those who kill their fathers or mothers, for murderers, for adulterers and perverts, for slave traders and liars and perjurers – and for whatever else is contrary to the sound doctrine”. As I write in my book, Strained Relations:

The term rendered by the NIV as ‘perverts’ is arsenokoitai, which, as we have already seen, means males who take other males to bed. As scholars point out, it is a rare word. It “does not appear to have existed before the time of Paul”.

After examining some contemporary Greek and Roman usages of the term, New Testament scholar Ben Witherington says this: “This word literally and graphically refers to a male copulator, a man who has intercourse with another man.”

The compound word is made of two terms, arsenos (= male) and koitain (= sleep with, lie in bed, have sexual relations with, from which we get the word coitus, ie., intercourse). ‘Male bedders’ would be a literal, if somewhat wooden, translation. Sex between men, or homosexuality, is clearly in view here.

Both of these two terms come directly from the Septuagint (the Greek translation of the Old Testament) version of the two Leviticus passages. Lev. 18:22 contains both terms, as does 20: 13. So Paul clearly has the Holiness Code in view when he used this term. Scholars such as David Wright in fact believe that Paul coined this term from the two Leviticus texts.

The term clearly covers all aspects of homosexuality, not just some. As George Knight comments, the “word does not refer, as some writers have alleged, only to sex with young boys or to male homosexual prostitutes, but simply to homosexuality itself (so Paul explicitly in Rom. 1:26, 27).” Or as Quinn and Wacker argue, “the arsenokoitai are … understood to be all homosexuals, active or passive, old or young”.

One leading expert on the Pastorals, Philip Towner, says this about the term in question: “It denotes, unequivocally, the activity of male homosexuality, and the view of this practice adopted in this text corresponds to that of Paul elsewhere (Rom. 1:27).”

Thus to foolishly claim the English term “homosexuality” is not found in any Bible until recently is not only being utterly anachronistic, but is being deliberately deceptive when it comes to the Biblical text. The Bible from start to finish condemns homosexuality while affirming the only divinely-mandated form of human sexuality: the one man, one woman marriage union.

But those who hate God, who hate his word, and hate his morality, will continue to trot out utterly ridiculous and disingenuous ploys like this. But to them the Word of God has already made clear warnings. Peter says that “ignorant and unstable people distort [Paul’s writings], as they do the other Scriptures, to their own destruction” (2 Peter 3 16).