This is a passage which bothers many folks – both believers and non-believers. It seems to make God the author of evil, or at least make him responsible for particular evil outcomes. The verse says this: “Now the Spirit of the Lord had departed from Saul, and an evil spirit from the Lord tormented him.”

Does God send evil spirits? Is that not what the devil might do instead? And what is meant by an “evil spirit”? These and other questions arise here, and they are well worth discussing in more detail. It can first be pointed out that there are several other occurrences of this phrase, or something similar to it. In this book we have the following: 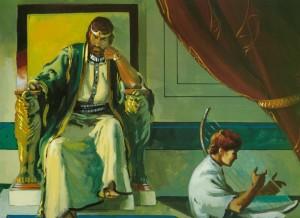 Also in 1 King 22:19-22 we find a similar situation in which a “deceiving spirit” in the mouth of the false prophets is said to come from the Lord in the time of Micaiah. Of course it is important to examine the phrase itself. Some translations, such as the ESV, put it this way: a “harmful spirit”.

Bill Arnold remarks, “The term can also mean simply an ‘injurious’ or ‘bad’ spirit, as noted by the NIV translators, and may well denote a ‘bad mood’ or ‘gloomy outlook.’ In this way, the spirit from Yahweh represents a foreboding sense that Saul is moving inescapably toward self-annihilation.”

Joyce Baldwin in her commentary agrees that an “injurious” spirit is another possible translation, and reminds us of Job 2:10: “Shall we accept good from God, and not trouble?” She writes, “the people of God are encouraged in Scripture to take adversity of all kinds direct from the Lord’s hand (cf. John 9:3; 11:4; 2 Cor. 12:7-10).”

Or as Mary Evans comments, “Everything that happened, good or bad, was seen as coming from God, and in this context ‘evil’ can simply mean ‘harmful’. Saul suffered from these terrible moods and therefore God must in some way be seen as responsible for them.” Daniel Block says this: “a bad spirit of God . . . is ‘bad’ because the effects of his possession are negative and destructive for the object”.

These writers raise an important point, namely that we hear very little about Satan in the Old Testament, and God is seen as sovereign over all things. Satan only gets three brief mentions in the OT: 1 Chronicles 21:1; the first two chapters of Job; and Zechariah 3:1-2.

The surprisingly limited amount of space devoted to Satan shows his relative insignificance. It is God with whom we have to do, not his adversary. The traditional understanding of both Jews and Christians is that God’s purposes ultimately triumph, but he may work through secondary agents (such as Satan).

It is also important to get the background on this. Why had God rejected Saul? We find the answer to this in various places in 1 Samuel. For example, in 1 Samuel 13:13-14 we find this: “‘You have done a foolish thing,’ Samuel said. ‘You have not kept the command the Lord your God gave you; if you had, he would have established your kingdom over Israel for all time. But now your kingdom will not endure; the Lord has sought out a man after his own heart and appointed him ruler of his people, because you have not kept the Lord’s command’.”

And in 1 Samuel 15:11,19 we read: “‘I regret that I have made Saul king, because he has turned away from me and has not carried out my instructions.’ Samuel was angry, and he cried out to the LORD all that night. . . . ‘Why did you not obey the LORD? Why did you pounce on the plunder and do evil in the eyes of the LORD?’”

Because of Saul’s wilful disobedience, Samuel goes on to make this famous statement in vv. 22-23:
“Does the LORD delight in burnt offerings and sacrifices
as much as in obeying the LORD?
To obey is better than sacrifice,
and to heed is better than the fat of rams.
For rebellion is like the sin of divination,
and arrogance like the evil of idolatry.
Because you have rejected the word of the LORD,
he has rejected you as king.”

So a long history of disobedience and rebellion on Saul’s part meant that Yahweh rejected him as king, and chose instead young David. The simple truth is, the Lord abandoned Saul because Saul had abandoned the Lord. Indeed, this is another point worth emphasising. At the end of the day, Saul is responsible for all this.

His long-term rebellion is dealt with by a sovereign God. As Arnold writes, “As we will see, the attacks generated by this injurious spirit are not constant but are periodic. However we are to understand its precise nature, the text is clear. The ruinous spirit comes from Yahweh because of Saul’s persistent and unrepentant stance, and it is the source of his problems, plaguing him throughout the rest of the narrative….

“Though modern readers may resist taking this injurious spirit as coming from God, the point of the text is to link Saul’s illness to his own rebellion against God. His problems from this point on are a result of his refusal to accept God’s authority structures, so that God is justified in sending the injurious spirit.”

One can also talk about the relationship between divine sovereignty and human responsibility here. As always, we have some mystery, and some unanswered questions. But somehow God is directly behind all this, while Saul is also fully responsible as well.

As Robert Bergen comments, “Saul’s tortured state was not an accident of nature, nor was it essentially a medical condition. It was a supernatural assault by a being sent at the Lord’s command, and it was brought on by Saul’s disobedience.”

Or as David Firth states, “It should be borne in mind that the OT is seldom concerned with secondary causation, and since Yahweh is Lord of all, the spirit is seen as coming from him. But the narrative still holds Saul responsible for his actions while afflicted (18:10-11; 19:10), so though this statement is absolute, the wider narrative indicates that a more nuanced understanding is necessary.”

Overall, the biblical message is that God is indeed sovereign, but he is not directly the author of evil. This passage is one of many texts that must be examined in this light. And it serves as a strong warning to us all as well. God may well use a person for his purposes, but it is also possible for that person to reject God, forcing God to reject him.

So let us seek to learn any spiritual lessons that come forth from this admittedly difficult passage. It is not just our heads that need to be engaged here, but our hearts as well.