The African Islamic terror group based primarily in Nigeria is never far from the news, including its recent kidnapping of nearly 300 mainly Christian schoolgirls. Their name means ‘Western education is sin’, with their proper name being ‘The Congregation of the People of Tradition for Proselytism and Jihad’. The group was founded by Mohammed Yusuf in 2002 and it seeks to establish a fully Islamic state ruled by sharia.

It has been responsible for countless attacks and countless deaths, and is the very epitome of evil. Yet as is so often the case, the West – and especially the Western media – is clueless about this group and its ideological origins. And those origins are the political ideology of Islam. 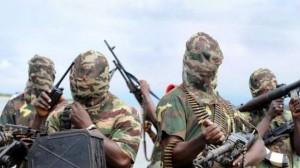 Boko Haram is simply seeking to carry out orthodox Islamic teachings, based on the Koran, the Hadith and the Sira. And it is all based on the life and example of the prophet Muhammad. But the West finds all this just too much – it simply does not understand Islam nor groups like Boko Haram.

As a result, we continually are fed a stripped-down, sanitised, and therefore largely mythic view of Islam in general and Boko Haram in particular. The West and its lamestream media is too interested in defending Islam and covering up for its 1400-year history of terror, violence, bloodshed and jihad.

So once again, it is largely the alternative media that must run with the real story here. And part of the real story is to start believing the Islamists when they tell you they hate you and want to kill you, and to believe them in the case of the kidnapped schoolgirls.

And again: “The reason why I will kill you is you are infidels, you follow Democracy.…Whoever follows Democracy is an infidel.” To help us understand what Islam and Boko Haram are all about, let me recruit a few others here. Islam expert Robert Spencer reminds us of a few home truths:

The world has only begun to notice them because of the abduction of the schoolgirls, but the Nigerian jihad terror group Boko Haram has been around for years. Without attracting the international outrage they have drawn upon themselves now, they have committed innumerable acts of unimaginable savagery, murdering over 2,500 people in the first three months of 2014 alone and torching numerous churches and Christian homes.
At my website Jihad Watch a Google search turns up about 115,000 results for “Boko Haram,” indicating that anyone who has been tracking jihad activity over the last few years has had plenty to track in Boko Haram, and that the outrage over the abducted schoolgirls, as welcome as it is if it results in genuine action to stop this brutal and bloody group, is quite late and arbitrary.
Of course, in the Obama administration it hasn’t been fashionable to talk about jihad activity other than within the context of al Qaeda, and Boko Haram is not al Qaeda. Therefore it essentially did not exist (either for the administration or for the mainstream media that it carries around in its pocket like so many nickels), or if it did, it wasn’t a terrorist group: Hillary Clinton’s State Department was notoriously slow to designate it as such, even as the dead bodies piled up.

And he reminds us that this behaviour is all very orthodox, and that the Koran does indeed allow for the owning of sex slaves. Consider just two quotes:

And also prohibited to you are all married women except those your right hands possess. (Koran 4:24)

Says Spencer: “The mainstream Muslim commentary Tafsir al-Jalalayn explains that 4:3 tells Muslims to ‘marry only one, or, restrict yourself to what your right hands own, of slavegirls, since these do not have the same rights as wives.’

“The twentieth-century Qur’an commentator Maulana Bulandshahri explains the wisdom of this practice, and longs for the good old days: ‘None of the injunctions pertaining to slavery have been abrogated in the Shari’ah. The reason that the Muslims of today do not have slaves is because they do not engage in Jihad (religion war)….Muslims have been denied a great boon whereby every home could have had a slave’.”

Bruce Thornton speaks about the “Left’s Empty Moral Outrage” in all this:

The outrage over the kidnapping of nearly 300 schoolgirls by the Nigerian jihadist gang Boko Haram reeks of Western hypocrisy and moral idiocy. Boko Haram has for years been slaughtering Christians – up to 2500 this year alone – and burning churches in a classic Islamic jihad against infidels. These depredations apparently weren’t enough to get the group designated a terrorist organization by Hillary Clinton’s State Department. But this indifference to what under international law is a genocide has been indulged as well by our celebrities and the mainstream media, who rarely mention that the group is specifically targeting Christians, and before the girls were kidnapped displayed little interest in the suffering of those Christians….
Why haven’t the thousands of Nigerian Christians already slaughtered by Boko Haram been worthy of this same uproar as the kidnapped schoolgirls? Of course suffering children are always triggers of easy sentiment and emotion – “I want to reach out and save those kids,” Obama said at Steven Spielberg’s house, at the same time he pretty much implied he wasn’t about to actually do anything. But plenty of children have already been raped and killed by Boko Haram, and many more are dying in Syria, Sudan, Egypt, and numerous other venues.

The kidnapping of the schoolgirls throws into bold relief a central part of what the jihadists are about: the oppression of women. Boko Haram sincerely believes that girls are better off enslaved than educated. The terrorists’ mission is no different from that of the Taliban assassin who shot and nearly killed 15-year-old Pakistani Malala Yousafzai—as she rode a school bus home in 2012—because she advocated girls’ education. As I know from experience, nothing is more anathema to the jihadists than equal and educated women.
How to explain this phenomenon to baffled Westerners, who these days seem more eager to smear the critics of jihadism as “Islamophobes” than to stand up for women’s most basic rights? Where are the Muslim college-student organizations denouncing Boko Haram? Where is the outrage during Friday prayers? These girls’ lives deserve more than a Twitter TWTR -1.65% hashtag protest.
Organizations like Boko Haram do not arise in isolation. The men who establish Islamist groups, whether in Africa (Nigeria, Somalia, Mali), Southwest Asia (Afghanistan, Pakistan), or even Europe (U.K., Spain and the Netherlands), are members of long-established Muslim communities, most of whose members are happy to lead peaceful lives. To understand why the jihadists are flourishing, you need to understand the dynamics within those communities.

I am often told that the average Muslim wholeheartedly rejects the use of violence and terror, does not share the radicals’ belief that a degenerate and corrupt Western culture needs to be replaced with an Islamic one, and abhors the denigration of women’s most basic rights. Well, it is time for those peace-loving Muslims to do more, much more, to resist those in their midst who engage in this type of proselytizing before they proceed to the phase of holy war.
It is also time for Western liberals to wake up. If they choose to regard Boko Haram as an aberration, they do so at their peril. The kidnapping of these schoolgirls is not an isolated tragedy; their fate reflects a new wave of jihadism that extends far beyond Nigeria and poses a mortal threat to the rights of women and girls. If my pointing this out offends some people more than the odious acts of Boko Haram, then so be it.

5 Replies to “Boko Haram: What You Need To Know”