I have hesitated on writing about this. The story has now been around for several days and is causing no small stir. But since I have written so often about celebutards in general, and this guy in particular and his moronic remarks about Jesus, I thought I would give it a miss.

But since the story is still bubbling along, I guess I can throw my two cents worth in here. I refer to aging homosexual rocker Elton John. As I say, I have written about him on various occasions in the past, including this piece when he said some really stupid things about Jesus: billmuehlenberg.com/2010/02/19/elton-john-is-a-super-unintelligent-gay-man-and-jesus-wasn%E2%80%99t/ 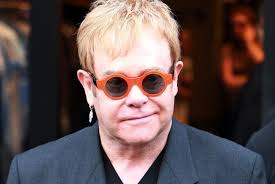 Well he has been at it again, making very public and very appalling remarks about Jesus, Christianity and his immoral lifestyle. This is not unexpected of course. All sinners who have hardened their hearts against God and truth will seek to justify their sin, and do so by the most flagrant of lies and falsehoods. Consider how one news item reports this:

Elton John argued Sunday that Jesus Christ would support the idea of two gay priests tying the knot and that the celibacy vow among clergy is an “old and stupid” rule that should be abolished. “The new Pope has been wonderful; he’s excited me so much,” the 67-year-old Grammy winner told Sky News. “He’s stripped [the Church] down to the bare bones and said it’s all basically about love.”
Mr. John, who hopes to marry David Furnish some time next year, said gay clergy should be allowed to marry and have sexual relationships. “These are old and stupid things. If Jesus Christ was alive today, I cannot see him, as the Christian person that he was and the great person that he was, saying this could not happen,” he said. “He was all about love and compassion and forgiveness and trying to bring people together, and that’s what the church should be about.”

So what can one say? On the one hand, we of course fully expect brainless and immoral celebs to say brainless and immoral things. No surprises here at all. Just another big time pop star who is pontificating on things he is utterly clueless about. So in one sense it is barely worth wasting time on these num nums.

But given how much influence they have worldwide, I guess a quick reply may be in order. Not that Elton will likely take any heed. But those who may have been mentally and morally swindled by his dopey remarks might be able to hear a bit of truth, so here goes…

First, I will skip discussing the Pope. Suffice it to say that when folks – including Catholics – ask me what I think of him, I say that he seems to be all over the place, and he can be a real worry at times. And many Catholics agree with me. But here I restrict myself just to the foolishness of Elton, so please, no sectarian warfare here.

As to the notion that the church is “all about love,” well, baloney. It is about a whole lot more than that. God is a God of love, but it is a holy love, a just love, a pure love. It sure ain’t about the depraved lust of sodomy. The love of God is just one of his attributes, and his holiness, justice, and purity must never be separated from it.

When these guys talk about “love” they of course mean nothing about the biblical understanding of love. Biblical love is always about willing the highest good for the other person. And willing them to remain in a dangerous, unhealthy and perverse lifestyle has nothing to do with love at all.

And sorry Elton ol’ boy, but Jesus was not just about ‘bringing people together’. His entire life and mission was in fact one of division and separation, as any quick reading of the gospel accounts will reveal. Wherever he went and whatever he said, he caused division and contention. Consider just a few (of many) passages which speak to this:

Luke 3:17 His winnowing fork is in his hand to clear his threshing floor and to gather the wheat into his barn, but he will burn up the chaff with unquenchable fire [John’s prophesy about the division Jesus would bring to Israel]

John 7:40-43 On hearing his words, some of the people said, “Surely this man is the Prophet.” Others said, “He is the Christ.” Still others asked, “How can the Christ come from Galilee? Does not the Scripture say that the Christ will come from David’s family and from Bethlehem, the town where David lived?” Thus the people were divided because of Jesus.

John 9:16 Some of the Pharisees said, “This man is not from God, for he does not keep the Sabbath.” But others asked, “How can a sinner do such miraculous signs?” So they were divided.

Of necessity Jesus brought division. Those who acknowledged who he was, repented and forsook their sins, would enter the Kingdom. Those who would not bow the knee to Christ would stay excluded from it. Indeed, they would hate Jesus and ultimately crucify him.

And the idea that Jesus would support homosexual marriage is near to blasphemy of course. Jesus was the holy Son of God who came not to abolish the law but fulfil it. He is the one who affirmed the divine plan for heterosexual marriage announced way back in Genesis 1 and 2 (see Matthew 19:5 for example).

Jesus knew full well that homosexuality was an abomination and a sin to be forsaken. He never would bless nor condone any form of sin or that which is evil. Anyone making such a claim is not only biblically illiterate but speaking Satan’s thoughts, not God’s thoughts.

The entire picture found in Scripture of Yahweh and Israel, or Christ and the church, is based on the complementary nature of male-female marriage. This theme runs throughout the Bible, and it is a gross perversion to somehow think that a sodomite relationship is in any way equivalent.

But as I say, we expect such moronic remarks coming from our immoral celebs who are simply seeking to justify their own sinful lifestyles. But when they seek to so twist Scripture and so distort who Jesus is, then they are playing hardball, and their actions will be dealt with quite severely when they stand before their righteous judge.

In the meantime we of course can pray that Elton and others like him see the light. But if they refuse to repent and bow the knee, then the just judgment of God will be their only reward. I would not want to be Elton standing before the real Jesus Christ one day if he does not turn.