One very telling political cartoon making the rounds shows US Secretary of State John Kerry at a table with a Hamas terrorist and Israeli Prime Minister Netanyahu. The Hamas militant has a child human shield in one arm with a sheet of demands in the other, saying “Death to all Jews. Kerry, looking to Netanyahu, asks, “Could you at least meet him half way?” 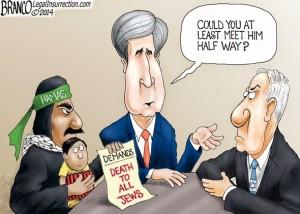 That about sums up most Western thinking about the current conflict in Gaza, and the way the lamestream media portrays this situation. Both are utterly clueless about the real nature of this conflict and the real nature of Hamas. Both tend to think things are overwhelmingly the fault of Israel, and if it would just ease up and negotiate, things might work out.

Umm, no, you do not negotiate with those who have sworn to kill you. The Hamas Charter makes it perfectly clear that it is not a peace deal with Israel they are looking for, but the slaughter of every Jew around. One does not seek compromise with such people.

Yet the pro-Hamas media continues to lie their way through this entire conflict, with one pic after another of wounded children in Gaza. They never bother to ask why such children are being killed and wounded. When Hamas deliberately uses children as human shields, and deliberately places their command and control centres in or near schools, hospitals, mosques and other civilian sites, then of course civilian casualties will occur.

And that is just what they want. They know that the fools from the Western media will film all this and broadcast it around the world, painting Israel as the bad guy. It is as much an example of brilliant propaganda as it is an international war crime.

Yet Western politicians and media still paint all this as a case of Israeli aggression. Never mind the thousands of Hamas missiles raining down on Israeli civilian targets. Never mind the extensive underground tunnels Hamas has been building to enter Israel and cause maximum damage.

An excellent piece on this was just penned by Paul Sheehan, and is worth quoting at length from. He writes:

Israeli security thought it had adequate intelligence about Gaza. It was in for a surprise. It was not just the labyrinth of tunnels discovered, much more extensive than expected, but the stockpiles: thousands of weapons, Russian anti-tank missiles, explosive devices, and large amounts of tranquillisers, handcuffs, syringes, ropes. The tools of capture on a large scale.
Some of the tunnels are very deep, big enough to hold vehicles. They were dug with electric jackhammers, mostly about 20 metres below ground, and reinforced with concrete made on site, in workshops adjacent to the tunnels.
The tunnels served as command centres, infiltration points into Israel, weapons stores, rocket-launcher hiding sites, and the means to move and conceal fighters during urban combat. The tunnels dug into Israel were created in parallel pairs, with multiple shafts to the surface for multiple entry points. Inside urban Gaza, the labyrinth could allow fighters to move unseen between homes and alleys.
Gaza had been wired for war. On a scale more advanced than Israeli military intelligence realised, which is why the Israel Defence Forces lost more than 40 soldiers in the first phase of Operation Protective Edge.
Areas of cities were laced with hundreds of booby-traps. The commander of the IDF Gaza Division, Brigadier-General Mickey Edelstein, said that in a single street in Khan Yunis in southern Gaza, his soldiers had found booby-traps in 19 of 28 homes. Three Israeli soldiers were killed by an explosive device when they entered a building designated as a United Nations Relief and Works Agency for Palestine Refugees. The IDF has conceded it was surprised by the scale of the bomb traps across Gaza.
Israel is thus engaging in very limited ground combat in Gaza, given the whole area is a booby-trap of explosives, ambush and civilian targets. The largest known military control centre for Hamas was placed in the basement of a hospital.
The IDF’s use of bombing has created a heavy civilian cost. ‘‘Hamas planned these tunnels for years, and planned to use them to kidnap soldiers,’’ chief spokesman for the IDF Brigadier-General Moti Almoz told a recent media briefing.
Actually, since then it has emerged that Hamas had a much broader agenda. Kidnappings can deliver psychological blows to Israel but not strategic ones. Hamas wanted strategic blows. It wants jihad. Having devoted so much to war preparations, by some estimates 40 per cent of its budget, Hamas, with Iran, created the capacity for a major strike on Israel.
Israeli intelligence is assembling evidence from the tunnel labyrinth and from captured Hamas members, that the scale of the effort was to have the capacity to launch a co-ordinated attack involving thousands of the approximately 15,000 fighters Hamas has trained in Gaza….
The sheer scale of the war infrastructure revealed guarantees that Israel is far from done with this operation. It does not yet know the full scale of what was built and it wants this springboard of war and attrition destroyed. Tunnels have also been discovered in the West Bank, some stocked with bomb-making materials.
This is why the Israel government and public reacted with fury when US Secretary of State John Kerry suggested last week that Israel agree to a ceasefire which included a cessation of its operation to find and destroy tunnels. The proposal was deemed preposterous.

If you like cease-fires, then this is a great time to be alive. Those Israelis who weren’t shot in the head by Hamas terrorists (whom Andrew Sullivan insists weren’t real Hamas terrorists, trading in his obsession with Sarah Palin’s rogue pregnancy for a new conspiracy theory) or killed by a Hamas rocket, encounter almost as many cease-fires in a given day as terrorist attacks. A cease-fire comes along every few minutes and it can last anywhere from a minute to an hour to a few hours until Hamas once again begins firing rockets or swarming through tunnels to attack Israelis.
“War, what is it good for?” The Temptations sang. The obvious answer is that wars done right keep you from having to keep fighting. But cease-fires with Hamas aren’t good for that or anything else. Hamas violates its own cease-fires. It declares cease-fires and then denies that it declared them. It seems to have almost as many positions on cease-fires as John Kerry does on Iraq. Israel’s unilateral cease-fires with Hamas are as worthless as its unilateral withdrawal from Gaza which allowed Hamas to take over the area. The cease-fires don’t stop the fighting. They don’t bring an end to the violence.

The cease-fire is just the peace process stripped as naked as the fairy tale emperor. It works exactly the same way. Terrorists attack Israel. Israel fights back. The photogs snap staged photos of Israeli atrocities, complete with painstakingly posed brand new teddy bears. The diplomats show up and demand that Israel make concessions to the terrorists in exchange for not being shot at. The concessions are made and the terrorists go on shooting anyway. It’s the same old story, without any of the empty talk of “Peace in Our Time.” There’s no promise of co-existence. No new Middle East. Just Lucy in a Burka holding out an exploding football.

We didn’t respond to Pearl Harbor with an unconditional cease-fire. We didn’t address 9/11 with a cease-fire. As miserably defeatist as this administration has been, it still hasn’t declared a cease-fire with Al Qaeda no matter how many civilians, including children, die in the process.
A cease-fire is even more pointless than a peace process. At least a peace process has a goal. A cease-fire is a temporary interruption in hostilities. It doesn’t accomplish anything except to prolong and delay the inevitable. It’s not an end to war. It’s a war that drags on interminably without any final conclusion. Instead the rockets keep falling year after year in the war that never ends.
A million cease-fires solve nothing. Especially when Hamas continues to violate its own cease-fires, accepting them and then rejecting them and then attacking anyway. We don’t have a cease-fire with Al Qaeda. Instead Obama keeps promising to defeat Al Qaeda. Doesn’t Israel deserve to win its own war on terror?

And a concluding word on the gross irresponsibility of the mainstream media on this issue. As one journalist correctly states:

Basically, the Western media has taught Hamas that it doesn’t matter how downright evil you are. It doesn’t matter if you launch two thousand missiles at civilian targets, including the airport. It doesn’t matter if you use your own children as human shields. You’ll get the coverage you want if CNN, BBC et al. have props to point their cameras at. Our form of news-gathering has taught Hamas to turn their children into those props, and to sacrifice them on the altar of Jihad. By misreporting, our media has encouraged the bad guys to kill their own children, and has dragged Israel into a war it did not want.

It is terrific to get a few voices of sanity and truth-telling in this conflict. Given that the mainstream media refuses to offer either, I will continue to do so here.

20 Replies to “Hamas, Gaza and Truth-Telling”