Tragically many Christians never actually read their Bibles. Or if they do, they stick to the New Testament. But that means they are ignoring a full three quarters of God’s word. To ignore most of Scripture is a real loss. These folks are missing out on just so much.

One of the things we find there are marvellous passages speaking about the broken heart of God. And one of the places where this especially comes out, perhaps surprisingly, is in the prophetic books. One might think that these deal just with gloom and doom and judgment to come, but there is much more to be found there.

Often the prophets spoke about their grief in seeing Israel stray from its calling and face impending judgment. It broke their hearts because it broke God’s heart. The prophet, standing in the place of God, delivered not just God’s word, but he shared God’s heart as well. 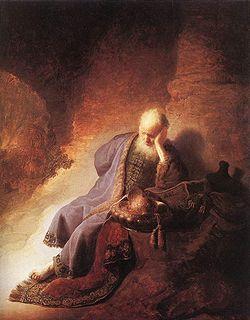 So close to the very heartbeat of God was the true prophet, that often when we read their words it is hard to discern if it is the prophet speaking or Yahweh speaking. The prophet fully shared the heart of God, and what broke God’s heart broke his heart.

The prophet said what needed to be said, even if it was devastating news of judgment. It was not something to delight in, but to weep over. The prophet loved God, but also loved God’s people. So to speak of coming judgment was a grievous job.

Because the prophet delighted in God’s justice, he boldly spoke about divine judgment to come. But because he shared God’s bowels of compassion, it broke his heart to do so. We see this so often in the prophetic writings. Let me share just a few of these, all from my recent readings:

Isaiah 22:4 Therefore I said, “Turn away from me; let me weep bitterly. Do not try to console me over the destruction of my people.”

Isaiah 49:13-16 Shout for joy, O heavens; rejoice, O earth; burst into song, O mountains! For the LORD comforts his people and will have compassion on his afflicted ones. But Zion said, “The LORD has forsaken me, the Lord has forgotten me. Can a mother forget the baby at her breast and have no compassion on the child she has borne? Though she may forget, I will not forget you! See, I have engraved you on the palms of my hands; your walls are ever before me.”

Isaiah 63:9-10 In all their distress he too was distressed, and the angel of his presence saved them. In his love and mercy he redeemed them; he lifted them up and carried them all the days of old. Yet they rebelled and grieved his Holy Spirit. So he turned and became their enemy and he himself fought against them.

Jeremiah 8:21 Since my people are crushed, I am crushed; I mourn, and horror grips me.

Jeremiah 9:1 Oh, that my head were a spring of water and my eyes a fountain of tears! I would weep day and night for the slain of my people.

Jeremiah 9:18 Let them come quickly and wail over us till our eyes overflow with tears and water streams from our eyelids.

Jeremiah 13:17 But if you do not listen, I will weep in secret because of your pride; my eyes will weep bitterly, overflowing with tears, because the LORD’S flock will be taken captive.

Wow, that is a lot of emotion there. And as I noted, it is often hard to tell if it is the prophet speaking these words, or God himself. Both speak from a heart overflowing with love and compassion, and the idea that God’s stubborn and rebellious people must face the just anger of God is painful indeed.

Let me focus on just one other of these sorts of passages. Jeremiah 4:18-19 says this: “Your own conduct and actions have brought this on you. This is your punishment. How bitter it is! How it pierces to the heart! Oh, my anguish, my anguish! I writhe in pain. Oh, the agony of my heart! My heart pounds within me, I cannot keep silent. For I have heard the sound of the trumpet; I have heard the battle cry.”

Chris Wright in his new commentary discusses just who is speaking here, and then says:

Nevertheless, there can be no doubt that the emotions of the prophet reflect those of his God, for if the heart that is pounding in agony in verse 19 belongs to Jeremiah, the heart that is pierced with bitterness at the end of verse 18 belongs to God. My anguish is literally, ‘my belly’. The staccato words of verse 19 speak of a churning stomach and a throbbing rib-cage – the effects of violent emotional stress, as Jeremiah experiences the shocking sights and sounds of battle. There is no glorying in warfare, no gloating over a people and land suffering what they are said to deserve as judgment. Nothing but pain and anguish at the ‘evil’ these people have brought upon themselves. We are reminded yet again that the language of God’s judgment must be heard through the agony of God’s heart.

The American rabbi and theologian Abraham Heschel wrote a key volume in 1962 called The Prophets. If you have it I urge you to grab it off your shelves (I have the two-volume version), blow off the dust, and reread it. Heschel writes,

“Ardent as was his love for the people, he was primarily driven by what God felt for Israel. . . . The prophet was fully conscious of his emotional nexus with God.” He continues, “The prophet not only was a man concerned with right and wrong. He also had a soul of extreme sensitivity to human suffering. In the midst of hurling the harshest words of impending doom, he was suddenly gripped by what was in store for his people.”

And again, “The disaster he threatened would be a disaster to him, sorrow and excruciating anguish. . . . This, indeed, was at the heart of his anguish. Those whom he loved he was called upon to condemn.” The prophet was one with God, and one with his people.

Michael L. Brown comments, “Jeremiah’s worst nightmare is about to become reality – suddenly, at that – and he is powerless to stop it because of his people’s unrepentant sin. . . . Here we see the total identification of the prophet with his people, as Calvin noted in his comment on Isaiah 22:4, ‘What has befallen the Church ought to affect us in the same manner as if it had befallen each of us individually’.”

Philip Graham Ryken also seeks to make this a contemporary and relevant message: “Jeremiah was not smug about God’s wrath; he took no satisfaction in the death of the wicked. Instead, he practiced what he preached (v. 8), putting on sackcloth to wail a lament when the Babylonians finally conquered Jerusalem….

“Where are the Jeremiahs of the evangelical church in these postmodern times? Where are the men and women who have such awe for the justice of God, such love for the church of Jesus Christ, and such pity for the lost souls of the world that they weep over the sins of the nation?”

Good questions. We can certainly use some weeping prophets today – those who identify with their God and also with God’s people. They seem to be few and far between. At the very least, we can pray that God will raise up more of them.