Imagine if a group of angry Christians took over a bus carrying Muslim school children, screamed at them and abused them, and threatened to kill them all. Imagine what the reaction would be, and how the media would cover this. There would be a huge outcry, with people demanding that Christianity be severely censured and proscribed. 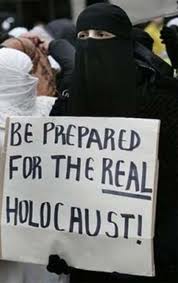 Well, an attack on young Jewish school children did take place in Sydney yesterday. Here is the shocking story:

Security was beefed up at three Jewish schools in Sydney this morning following a sickening racial attack against students on buses yesterday afternoon. Jewish children as young as five were subjected to a terrifying racial attack when thugs stormed their school bus and threatened to slit their throats.
Screaming “Kill the Jews” and “Heil Hitler” the louts jumped on the bus packed with about 30 students, from kindergarten to year 12, who were on their way home from school yesterday. Police this morning arrested five alleged offenders involved in the attack.

Now as Robert Spencer notes, while the media is not saying what religious motivations lay behind this fiendish attack, we can nonetheless find some root causes:

This kind of attack is enabled by the relentless demonization of Israel by the mainstream media and Islamic groups. They are normalizing in Western countries a culture of violence, hatred and anti-Semitism. The Daily Telegraph goes out of its way to emphasize that these men were blond and possibly drunk (although the bus driver, who clearly colluded with them, insisted that they were not drunk), as if to emphasize that they were not Muslims. But the increasingly violent, thuggish and authoritarian Left eagerly does the bidding of Islamic supremacists and jihadists.

But even if Muslims had nothing directly to do with this, let me offer another scenario. What if Christians conducted 23,577 terrorist attacks since 9/11? What if Christian terrorists carried out 268 such attacks in 28 countries just in July of this year, with 2660 people killed and 2079 critically injured?

What if Christians were regularly involved in carrying out acid attacks, honour killings, kidnapping of children, mass beheadings, child marriage, female genital mutilation, suicide attacks, the murder of innocent civilians, amputations as punishment, polygamy, killing of apostates, and the oppression of women?

And what if this had been taking place for 1400 years now, with it all done in the name of Christianity? Obviously there would be a world-wide reaction against this, with serious steps taken to put an end to this barbarism, bloodshed and bigotry.

The religion would be greatly curtailed and restricted, if not banned entirely. That would be the sensible response to so much horror. And yet, everything I offer above has in fact occurred and is occurring – not at the hands of Christians, but of Muslims.

This is standard fare for the Islamic political ideology. It is a death cult obsessed with killing, murder and mayhem. Yet we treat it as if it is just like any other religion, and fully deserving of full promotion, acceptance and celebration. We even have Western leaders singing its praises and observing its religious festivals.

I again ask you: if Christianity was behind one and a half millennia of terror, hatred and blood shedding, would it be tolerated, championed and appeased? The double standards here beggar belief. We foolishly accord Islam the highest respect, deference and latitude.

We fear offending it. We want everyone to respect it. We grovel before it. We seek to appease it. We bend over backwards to defend it. We do all we can to vilify its critics and silence its opponents. We have become a race of dhimmis, who fear offending Islam more than anything else.

This is simply the death wish of the West. If it does not snap out of its slumber and stop playing games, then we are all doomed. We cannot and should not appease and capitulate to this death cult. We can respect, love and reach out to individual Muslims.

And as Christians we are called to do this. But we have no reason whatsoever to seek to exonerate, defend and promote a political ideology bent on global domination and the death of the infidels. The daily outrages perpetrated upon us by this violent cult must be faced up to and called for what it is.

When someone tells you time and time again that they intend to kill you and take over your lands and destroy your customs, institutions and values, you don’t seek to accommodate them or appease them. You oppose them with all your might.

So when will the West wake up to its most deadly and diabolical opponent since godless communism?