Right now we are witnessing the horrific actions of a savage bunch of diabolical monsters who are killing, raping, pillaging, destroying and beheading all in their path. I refer of course to the monstrous militants of the Islamic State (IS).

There is no question that this mob of thugs and murderers is the very epitome of evil. They are targeting all non-Muslims, especially Christians and Jews, but are not averse to slaughtering fellow Muslims as well. So how should believers respond to this terrorist plague?

Sadly too many Christians are largely biblically illiterate, and the only passage they can come up with is “love your enemies” as spoken by Jesus, as if this was all that can be said about the matter. The Bible of course says a whole lot more about one’s enemies, and about basic principles of justice in a fallen world. 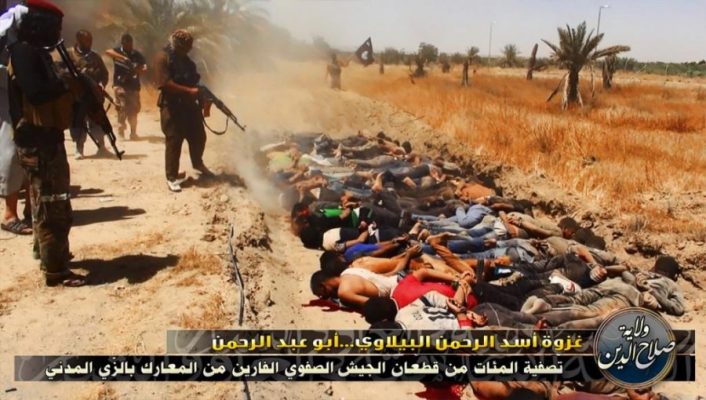 At least the Pope got it right recently, drawing upon the long-standing principles of just war theory: “In these cases, where there is unjust aggression, I can only say that it is licit to stop the unjust aggressor. I underscore the verb ‘stop.’ I’m not saying ‘bomb’ or ‘make war,’ just ‘stop.’ One nation alone cannot judge how you stop this, how you stop an unjust aggressor.”

But plenty of evangelicals would be clueless here. Because of a soggy and sugary understanding of God and his character; because of so much capitulation to the surrounding culture; and because of so much widespread biblical illiteracy in the churches, we tend to just mouth mindless platitudes about love and peace.

Scripture however is much more realistic about things. It recognises that there is real evil in the world, and that we do have real enemies. It also speaks about dealing with enemies. For example, in my reading of the Psalms I have found many dozens of Psalms which speak about enemies, or foes, or opponents.

A full third of the Psalter is at least in part devoted to this topic. And all these passages make for a fascinating study. Sometimes we read about God’s enemies, sometimes about the psalmist’s enemies. Often they are one and the same. And at the very least, we get numerous prayers asking for God to deal with these enemies, and to render justice.

They are heart-felt cries for justice; pleas for God to act; and calls for enemies to be judged here and now. Here is just a small sampling of them:

Psalm 7:6 Arise, LORD, in your anger;
rise up against the rage of my enemies.
Awake, my God; decree justice.

Psalm 13:2 How long must I wrestle with my thoughts
and day after day have sorrow in my heart?
How long will my enemy triumph over me?

Psalm 44:7-8 but you give us victory over our enemies,
you put our adversaries to shame.
In God we make our boast all day long,
and we will praise your name forever.

Psalm 60:12 With God we will gain the victory, and he will trample down our enemies.

Psalm 66:1-3 Shout for joy to God, all the earth!
Sing the glory of his name;
make his praise glorious.
Say to God, “How awesome are your deeds!
So great is your power
that your enemies cringe before you.

Psalm 68:1-2 May God arise, may his enemies be scattered;
may his foes flee before him.
May you blow them away like smoke—
as wax melts before the fire,
may the wicked perish before God.

Psalm 68:21 Surely God will crush the heads of his enemies,
the hairy crowns of those who go on in their sins.

Psalm 70:2-3 May those who want to take my life
be put to shame and confusion;
may all who desire my ruin
be turned back in disgrace.
May those who say to me, “Aha! Aha!”
turn back because of their shame.

Ps 89:10 You crushed Rahab like one of the slain;
with your strong arm you scattered your enemies.

Psalm 89:50-51 Remember, Lord, how your servant has been mocked,
how I bear in my heart the taunts of all the nations,
the taunts with which your enemies, LORD, have mocked,
with which they have mocked every step of your anointed one.

Psalm 97:1-3 The LORD reigns, let the earth be glad;
let the distant shores rejoice.
Clouds and thick darkness surround him;
righteousness and justice are the foundation of his throne.
Fire goes before him
and consumes his foes on every side.

Psalm 102:8 All day long my enemies taunt me;
those who rail against me use my name as a curse.

Psalm 139:21-22 Do I not hate those who hate you, LORD,
and abhor those who are in rebellion against you?
I have nothing but hatred for them;
I count them my enemies.

Psalm 144:6 Send forth lightning and scatter the enemy;
shoot your arrows and rout them.

Ah, but I can hear my critics already objecting: “Yes, but that is the Old Testament. Things are different now with Jesus and the New Testament.” Um, not quite. We too have enemies. Paul for example could speak about those who are the “enemies of the cross of Christ” (Phil. 3:18).

But look at just one important NT book which is all about Jesus: Revelation. Even a cursory glance of this will discover the same language and attitudes of those in the Psalms. In one sense the entire book is about God taking action against his enemies, and the enemies of God’s people. In Rev 11 for example we read about the Two Witnesses and the judgment upon their enemies.

So am I saying we should treat everyone as an enemy and look to physical retaliation? Of course not. But there certainly are those opposed to God and his people, and the prayers found in the Psalms are not inappropriate for believers today to pray as well.

There is nothing amiss in seeking justice, and seeking an end to great evil. In light of the horrors of IS – and another American just beheaded by IS – Dr. Ben Carson, the Christian neurosurgeon and potential POTUS candidate, had it right when he said this:

My greatest concern with ISIS is that we don’t have a plan to deal with them. We just tend to react. That is always going to leave us behind the 8-ball. We need to be thinking about “How do we get rid of them? How do we eliminate them completely?” Because their goal is to eliminate. You don’t negotiate with people whose goal is to eliminate you. That means that we have to have a strong military, an enthusiastic military. We have to have strong covert operations. We have to have the ability to organize with other people with similar interests as ours. And we need to make them understand that those interests are similar. Saudi Arabia needs to understand that before ISIS gets to us, it’s going to get to them. We need to be able to have these conversations. And we also need to have allies who understand that if they make an agreement with us, and ISIS comes after them, we’re not going to say “See ya!”…we’re not going to walk away from them like we do with Israel.

At the very least, God has ordained the state to deal with evil and render justice in a fallen world. And individual believers can offer the same cries of the heart to God as those in the Psalter did. We always should seek justice, and we always should seek to have God vindicated. Evil is real, and it needs to be addressed. “May God arise, may his enemies be scattered.”

13 Replies to “On Having Enemies”