Plenty of theologically illiterate types like to talk about unity and harmony and oneness and other cushy concepts. They think that religion is OK if we just get rid of the hard edges, ease up on the distinctions, and just appeal to the lowest common denominator.

The older ecumenical movement is largely based on such mushy sentiments. And the newer interfaith movement is stuck with the same delusions. “Let’s just downplay all of our differences and just learn to get along. Sing a few choruses of Kumbaya, offer a theologically nondescript prayer, hug each other a lot, and presto jasso: religious peace and harmony!”

Having already penned over 50 articles on the interfaith movement, I won’t repeat myself here, except to reiterate one vital point: whenever these things get up and running, the biggest loser is always biblical Christianity. Often these things are just set up for Muslim dawa, or mission. 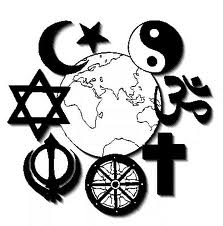 Plenty of utterly clueless Christians will soak up anything the Muslim apologists throw at them, while happily ditching all the distinctives of their own faith. Why lop off heads when you can just con gullible Christians into dhimmitude instead?

We have sadly had far too many examples of this in the past. But new cases keep popping up. In a clear case of interfaith on steroids, consider this recent headline: “House of One: a mosque, synagogue, and church under one roof.” The story opens:

In 2009, archaeologists working in the heart of Berlin excavated the foundations of what is thought to be one of the city’s first churches, St. Peter’s Church, built in the early 12th century, in what is now the Petriplatz area.
The church was destroyed during WW II and in its aftermath. The site where the once-grand Romanesque building stood is now little more than a wasteland—but that is set to change.
Due to the religious significance of the site, city planners asked local Protestants if they would like to be involved in the site’s redevelopment. But representatives of the Protestant community thought that another church was not necessarily the way to go.
“It became clear that we didn’t want to build another church,” said Anna Poeschel, member of the local Protestant community. “We have two big churches in our parish already, the Jewish population has exploded in the last 20 years, and the Muslims in the city need a mosque.”
What emerged instead was the the House of One—an idea for a new building hosting a church, a mosque, and a synagogue—all under the same roof. If all goes according to plan construction will begin next year and the doors will open in 2018.
Pastor Gregor Hohberg first put forward the idea of multifaith building, and Rabbi Tovia Ben-Chorin and Imam Kadir Sanci have now joined him in the project.
Each religion will have its own practice space, all equally sized but with different designs. There will also be a central room connecting the prayer rooms and providing an area where Christians, Muslims, and Jews can all meet, along with those of other faiths.
“We can see all over the world that faith can divide people,” said Markus Dröge, a Protestant bishop in Berlin. “We want to show that faith doesn’t divide Jews, Christians, and Muslims, but instead reconciles them.”

If a materialist tells you there is no non-material reality, you are already divided from such a person, if you are a biblical Christian. If a New Ager tells you that we are all part of the divine already, then you are separated from that person as a Christian.

If a Christian Scientist tells you that sin, sickness and death do not really exist but are simply false states of mind, then the biblical Christian must say “adios, bud”. If an adherent of the Baha’i faith tells you that all roads lead to God, you say, “No way Charlie; Jesus claimed to be the only way to God.”

The truth is, biblical Christianity is an exclusive faith. If Christian truth claims are in fact true, then those of other religions in large measure must be false. The simple logical law of non-contradiction comes into play here: if A, then not non-A.

If it is true that I am typing on my computer right now, then it is not true to say I am not, or that I am elsewhere doing other things. If it is true to say that Jesus is the unique revelation of, and only way to, the Father, then claims to the contrary are not true.

But, some not very discerning Christians might object: “Doesn’t Jesus speak about the importance of unity?” Well, yes he does. But this is a unity of all true Christians in Christ, as we read about in places like John 17. It is most certainly not a unity of all belief systems, ideologies, religions, or lifestyles.

Indeed, in that sense, it is closer to the truth to say that Jesus championed division, not unity. Consider just a few passages from John’s gospel for example:

John 7:40-43 On hearing his words, some of the people said, “Surely this man is the Prophet.” Others said, “He is the Christ.” Still others asked, “How can the Christ come from Galilee? Does not the Scripture say that the Christ will come from David’s family and from Bethlehem, the town where David lived?” Thus the people were divided because of Jesus.

John 9:16 Some of the Pharisees said, “This man is not from God, for he does not keep the Sabbath.” But others asked, “How can a sinner do such miraculous signs?” So they were divided.

John 9:39 Jesus said, “For judgment I have come into this world so that the blind will see and those who see will become blind”.

There can never be neutrality over Jesus and his claims. We either accept them and believe, or reject them and disbelieve. It is one or the other. That is why all attempts at interfaith dialogue are so limited, and so potentially dangerous.

If you try to play down the clear, exclusivist teachings of Jesus, then you deny the very heart of the Christian faith. But to affirm boldly and unashamedly the core claims of Christ will bring division. It must. Telling people they are lost, deceived sinners under the wrath of God heading to hell will never be popular, and it will never make for a good interfaith powwow.

But it may well cost you your head.

8 Replies to “A Divisive Faith”