We no longer believe in evil it seems – at least in the Western world. Hardly anyone takes the concept seriously anymore. Until recently of course we did believe there was such a thing as evil, but now we think such concepts are too black and white and too judgmental. So we have basically just ditched the concept altogether.

This is not surprising of course; we have already ditched the concept of God and sin, so it follows naturally that we would ditch the idea of evil. Instead of real evil being done by evil people in the name of evil causes, we simply have people who have self-esteem issues, or a bad upbringing, or are “victims” of society. 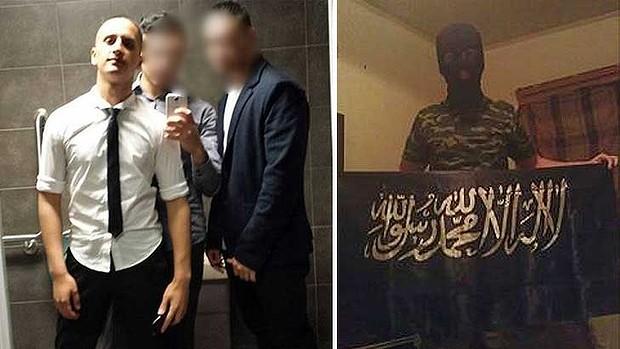 And if a guy in the name of a eighth-century political ideology attempts to lop off the heads of police officers in Melbourne, and capture it all on film, well, this is not evil – maybe a bit misguided or a bit rash, but hey, who are we to judge anyway?

Indeed, our young terrorist is already being defended by plenty of clueless wonders in the mainstream media. Many media reports have of course ignored the obvious – that he was a devout Muslim acting as a Muslim in the name of Islam – pushing instead all sorts of other rationalisations and justifications.

A common excuse now being heard is he was just a poor love struck kid who had bad luck with a failed romance. Yeah right. The truth is, every day of the year plenty of teens break up with their loved ones, and guess what? They don’t go around looking to chop off the heads of police, capture it on film, and wrap an IS flag around the victims. It takes a special sort of political ideology to make people want to do something like that.

Yet our lamestream media peddles dopey stories like this, desperately trying to find a reason why a “good kid” went bad. Well, maybe this might have something to do with it: a kid from a Muslim home who goes to an Islamic school and attends Islamic mosques just might possibly have picked up some of these ideas there.

I mean, the concepts of slaying the infidel and imposing sharia law throughout the land have been mainstream Islamic teaching and practice for 1400 years now. Maybe that might have a little bit to do with explaining his actions. Or is that a bit too obvious?

But hey, our PC dhimmis in the MSM will bend over backwards every day of the week to defend Islam, make excuses for it, and shift the blame elsewhere. Consider an editorial in today’s Age which warns about “the path to tyranny”. Wow, you mean they are finally waking up to the threat of Islam? Um, no, not quite. The path to tyranny happens not to be Muslims seeking to behead people here, but Tony Abbott and his new terrorism laws! Yes you heard me right!

And of course our political leaders are trying to outdo one another to play down any hint that Islam might in any way be involved. For example, Victorian Premier Denis Napthine coughs up the usual silliness on this: “It is not about faith, it’s not about ethnicity, it is about the alleged behaviour of an individual”.

Yet in the very next breath he says this: “It’s absolutely critical that we give the faith community here in Victoria support, give them information, that we allow them to share their insights with us. It’s what kept Victoria safe for many, many years.”

OK, so which is it Denis? Is it a faith issue or is it not a faith issue? If it has absolutely nothing to do with Islam, why do you want to spend so much time with the Islamic community on this? Talk about speaking out of both sides of your mouth. Talk about being a clueless wonder.

And of course the Islamic community is also seeking to deflect all this, claiming it is not about Islam and it is really about Muslims being victimised! Indeed, the Muslim as victim mantra is being heard all over the place. ‘It isn’t our fault. The West has made us do this. We are really peaceful, but you guys are making us act this way.’

The Islamic Council of Victoria for example refuses to condemn Numan Haider, and actually said we should not brand him as a terrorist! Well, what should we brand him as? A secular tuba player? A Christian badminton expert? A Buddhist butterfly collector?

Or consider the words of Sheikh Ustadh Mohammed Junaid Thorne: “This news has left the Muslim community in total shock and understood anger, as a normal young teen, 18 years of old, was killed by the Police who are supposed to be providing safety and security to the citizens of this country.” He calls him a “martyr” and claims the police murdered him!

Where are the Islamic leaders actually denouncing Numan Haider? Instead we have so many Muslim leaders and so many clueless dupes amongst our leaders, politicians and media harping on the brainless baloney about “alienation” and the like. As usual Andrew Bolt cuts through all this PC foolishness:

The Lebanese Muslim Association yesterday agreed Muslims were feeling marginalised and “picked on” and “root causes” here needed addressing. Our fault, then? That’s an excuse jihadists would want to hear. But how strange. We actually have about as many Buddhists as Muslims, yet only Muslims warn they are so “alienated” that we must expect terror attacks unless we change. This absurdly inflamed sense of victimhood — this blaming of non-Muslims — is now so common among Muslim leaders that we must conclude it is not just a misjudgment but a tenet of their ideology.

And on the day we learned the Islamic State had beheaded a second US journalist, the Australian National Imams Council and Grand Mufti Ibrahim Abu Mohamed again blamed Abbott for creating radicals. “One of the main causative factor (sic) for local radicalisation in the West has been the western governments’ military involvement in the Middle East.”
And there was this warning: “If the Australian Government is serious about reducing the terror threat locally, then it must review its foreign policy decisions with regard to this region.” Yes, for our Muslim leaders it seems the root cause of Islamic terrorism is never Islam and always the West. And so often there’s the same implied threat: change or risk death — said either as a demand or prediction, depending on whether the speaker is an extremist or moderate.
Or as the Koran puts it: “Slay the idolaters wherever you find them” and “fight them until there is no more fitnah (disbelief) and worship is for Allah alone.” True, the Mufti yesterday insisted Islamist terrorism was nevertheless un-Islamic, an interpretation most Muslims would endorse and which we must hope will prevail. But shifting blame on to the police? On to Australia? The ICV has betrayed us, like too many Islamic leaders before.
What must we conclude? That their foolishness is talking — or their faith?

So, there is no such thing as evil – at least not Islamic evil. When Muslims do decidedly Islamic things in the name of Islam, this is not evil. It is simply victimisation. So if there is any evil in the world, it is the evil West which somehow causes Islamic terrorism.

OK, got that. Terrorists: good. Those concerned about terrorism: evil. Yep. Check. Move along – there is nothing for you to see here.

11 Replies to “Whatever Happened To Evil?”