A leftist from the lamestream media thinks I am a terrorist and what I do is equivalent to IS beheading people. Yes, she actually said that. But then again, this gal may be in a contest to see who can make the most blatant bloopers, tell the most porkies, and massacre the truth as often as possible in a short opinion piece. 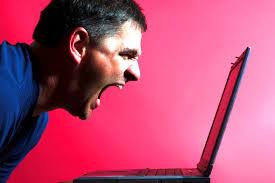 If we simply went on the use of ad hominem attacks found here we could make this opinion piece a major discussion point in any sophomore class on logical fallacies. The piece could indeed keep such a class going for at least half a semester. But of course this is standard fare from the MSM, where lies, mud-slinging and distortion are everyday affairs.

Incredibly, we have an “architecture critic” waxing eloquent on all things theological and philosophical, as she attacks me big time. All because I have exercised my democratic right in a free country to stand up for biblical truth and critique false shepherds in our pulpits.

To do that means I engage in “coercion,” “threats” and “terrorism”. And of course I am a “hater”. Yes, I am now in the same league as an IS fanatic who beheads innocent people – maybe even worse. Yet a national columnist who tells one porkie after another and totally misrepresents the truth is somehow a paragon of virtue.

This appallingly bad hatchet job by one Elizabeth Farrelly starts off with a doozey: she informs us that the sin of Sodom was not homosexuality, but inhospitality, and that this is the normal understanding of “biblical scholars”. Um no, not even close, as I carefully document in my book Strained Relations.

But hey, if you are going to fill an entire column with falsehoods and malicious nonsense, then I guess you need to get into it straight away. She manages to get most things about me wrong. I must be evil because she thinks I am a “creationist,” whatever that means. But it must be really nasty.

She claims I am the “Secretary of The Family Council of Australia”. Um, there is no such organisation in existence. But hey, don’t let sloppy journalism and careless disregard for truth get in the way of a good attack piece. Also, I am an “anti-gay blogger”. Oh, so I have not written thousands of articles on all sorts of other topics?

I also must be really evil because she says I am an “occasional columnist for The Australian“. Wow, that puts me right up there with paedophiles and the KKK. And never mind that it has been ten or fifteen years since I last had a column in that newspaper. But hey, who needs facts when you are having such a good time with character assassination?

But for daring to speak as a Christian about an infamous Christian wolf in sheep’s clothing has really got Ms Farrelly bent out of shape. For calling him out on his pro-homosexual agenda, I am right up there with bin Laden and IS. Um, what was that logical fallacy about guilt by association?

Yes, for daring to state the biblical position on the issue of human sexuality, I am a hater and a bigot and a terrorist all rolled into one. Wow, I must be a really nasty piece of work. She also claims I ‘habitually represent Satan “rubbing his hands with glee” over homosexuality’.

Um, I do? You mean when I defend the biblical position on this topic? But hey, don’t let truth get in the way of a good story. But the real winner here is how I am using ‘coercion’ and ‘threats’ and ‘imposing’ my views to prevent people from speaking. Really? Wow, I have that much power? Amazing.

Most people would not have gathered that from anything I have said or written. I merely mention that this renegade pastor is speaking at a major Christian festival, and now I have God-like powers! Hey, I simply asked a few hard questions as to why this guy is appearing there.

I obviously have no power at all to prevent anyone from speaking, and as far as I know, he is still going to be speaking there. So much for my great powers of threats and coercion. Yet this all makes for a great attack piece: present me as a hate-filled bully who is preventing people from speaking.

Actually, it is Ms Farrelly who is seeking to do just that. And she uses the platform of the Fairfax press to attack anyone she disagrees with, launching into one insult and falsehood after another, knowing she can get away with murder here. She knows full well that any victim of her hatchet jobs will not likely take legal action against all this slander and defamation.

And even if the victims of such vicious attacks did do this, the league of lawyers at Fairfax would easily fight the case with all the money they need at their disposal. So here she uses her platform as an opportunity to attack, abuse, misrepresent and denigrate anyone she disagrees with. Yet somehow I am the bad guy, full of hate, and identical to an IS terrorist, while she is basically deity personified.

But of course this is what we expect from a secular left media which long ago has abandoned any pretence to truth, objectivity and neutrality. The MSM is now simply the most powerful organ of the worldview of the secular humanists and the radical left.

Oh, and I will let you read her closing paragraphs, where she and the renegade pastor engage in some hardcore theological discussion. It is mind-blowing and frightening stuff – but of course not unexpected from the Fairfax press, and its host of secular left attack columnists.