So what are you doing with your life? Are you making a difference for Christ and the Kingdom? What are your priorities in life? What motivates you? For example, are you doing anything for the millions of unborn babies being slaughtered every year? 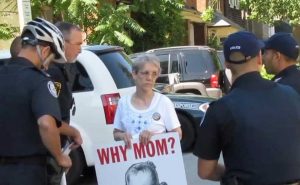 Sadly, most Christians are motivated by getting more money, buying bigger houses, or taking more overseas vacations. They may get absolutely passionate and fanatical about a football game. But as Leonard Ravenhill once asked, “Are the things you are living for worth Christ dying for?”

I wonder how many of us will stand before Christ one day with our heads hung low, when we realise how little we actually lived for Christ, and how much we lived for self. Sadly most Christians will be in this position I suspect. But not all of them. Consider one such woman, Linda Gibbons.

At an age when most people are in retirement mode, Linda Gibbons, 65, is still standing up for the unborn, and is paying a very heavy price for doing so. She is now languishing in a Canadian jail. In fact, she has been in jail for ten out of her last twenty years, all because she wants to protect the unborn.

As one article states concerning this champion:

Gibbons herself had an abortion when she was younger. After becoming a Christian, she came to regret that act and was inspired to help prevent others from making the same mistake—through her witness outside abortion clinics, of course, but also in her witness to fellow inmates in prison. “There’s women who tell me, ‘I’ve had an abortion,” she says. “And I tell them, ‘You can ask God for forgiveness. That’s what he shed his blood on the cross for.’”

Another article says this:

Linda Gibbons has been in prison since an August 7 arrest in Toronto while she witnessed to life outside an abortion facility protected by an injunction. Her case goes to trial November 12. She wrote the following letter this month to explain her ongoing mission.

Here then is the letter of Linda:

My intention is not an apology for the reason, cause or purpose I engage in civil disobedience against injunctions in place at these death mills; I’ve written on that previously. My presence is more than a challenge to unjust laws. My presence is a response to a distinctive human cry: the cry of Canada’s aborted unborn.
The courts have not responded to that silent cry. Currently, the killing of one in four children continues unabated.
Neither has the majority of Canadian parliamentarians shed tears over lives lost to abortion. Instead, they have unequivocally condoned the killing and compelled a tranquilized populace into paying for it.
When the social messaging regarding inconvenient or complicated pregnancies is “try again next time” or “better off dead,” it’s not a statement of the human condition but rather of cultural conditioning that implies some lives are unworthy of living. It begs the question: How much is a life worth? Unborn lives then become commodified and put on a sliding scale of values; ignored are the deliberate crimes against Canada’s own children.
What then should be a human response to the senseless attacks against babes in the womb? Essentially, the answer for me is simply to be there as one human being recognizes the endangered life of another, and to act in his or her defense. My presence is a plea for each child in jeopardy of being killed and the pamphlets I carry bear witness to the incontrovertible evidence of a child’s earliest existence, evidence denied them in the mill.
My presence is to plead for the living and to pray for the dying. I am witness to a holocaust: vis a vis over four decades of bloodshed.
Given the status quo of abortion on demand, with no legal redress throughout the entire gestation and delivery period, some would question the point of insisting that life is a sacred trust from conception until natural death and a God-given right worthy of defending.
My actions publicly demonstrate my commitment to resist the abortuary’s campaign of disinformation and to dissuade women from entering the killing centre.
For Christians, the failure to resist the practice of abortion makes a travesty of our faith. An empty sidewalk at the death centres and silence from the pulpits is scandalous when we are called to deliver those being dragged to death and those ready to be slain.
Not to take action contradicts God’s will and purpose for life. With abortion mills scarring the land from one coast to another and a death count in the millions, it calls for serious searching of heart. Have I done all I could in the face of such human carnage?
Should cares and commitments to family hold me back? What is the price of loving God’s unborn and not relinquishing the fight? I’ve weighed all of these. If the cost of loving and remaining with my family is the price of unborn blood, then the “cost of living” with family is too high. At what time, then, may I divest myself of the charge to defend life?
Imagine for a moment, in our world plagued with political unrest, the enemy coming to our towns and taking our children from us (as is happening in Iraq and Syria). Could we beg deliverance from God for our own when we were so reluctant to deliver His own babes in the womb threatened with death? When cares of the world distract and disturb, I’m reminded of the words of the Talmudic sage that Elie Wiesel, a holocaust survivor, quoted in his book, Open Heart:
“It is incumbent on you to love as if you were to die the next day.”
The love of God constrains me to love the unborn as if there were no tomorrow. I only have today and in it I am called according to His purpose to answer the unborn’s long and unending cry for life.
I remain present in their service.
In the Lord, Giver of Life,
Linda

What a champion. We desperately need more people like Linda Gibbons.

11 Replies to “We Need More People Like Linda Gibbons”