It seems that every day we hear of two things going on. One, horrible massacres, killings and violence done by Muslims in the name of Islam. And two, Western dupes and dhimmies warning against the dangers of “Islamophobia”. They seem to appear in equal supply and proportion, and are usually found together.

The more violence is done in the name of Islam, the more we hear about how bad all this supposed Islamophobia is. When we have managed to convince ourselves that the real evil in the world is fear of Islamic terrorism, and not the terror itself, then you know things have gotten really messed up. 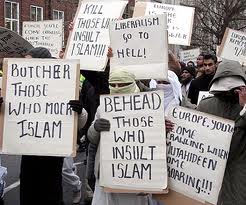 As to the bogus term Islamophobia, you will now hear it constantly. Consider these headlines from the Australian media from just the past few days:

The burqa debate: lifting the veil on Islamophobia in Australia
The Canberra Times

Islamophobia: Tony Abbott urged to speak out against attacks on Muslims
The Guardian

Incidents of Islamophobia
The Australian

Wow, according to these headlines, and plenty more like them, you would think there is only one major problem facing Australia today: people who are concerned about Islam. Yep, there must be a plague of people who have irrational and misguided concerns about Islam.

Indeed, why would anyone have any problems with Islam? What could possibly be of concern about this religion? Surely millions of Australians who have such concerns are just deluded, bigoted, racist and evil. Yep, that must explain things, at least according to the lamestream media version of events.

But wait, maybe there is something more to all this. Just maybe millions of Australians are fully justified in their concerns. Just maybe they have very good reasons to be a bit afraid, and a bit leery, and a bit hesitant about a religion which seems to thrive on killing, terror and bloodshed.

If we have a political ideology known as Islam which is responsible for the deaths of some 270 million people in its 1400-year reign of terror, then maybe people have a right to be a bit suspicious and anxious. If we have Islamic holy books telling us about the need for jihad, beheadings, honour killings, sexual slavery, and expansion by the edge of the sword, then maybe we should stand up and take notice.

If we have an archaic religious system which subjugates women, kills and enslaves non-Muslims, detests freedom and democracy, and wants to set up a universal theocracy, then maybe people in the West should be a bit edgy and nervous.

When we have regular anti-terrorist raids being conducted in Australia, not on Buddhist homes, schools and places of worship, or on Christians and churches, or on Jews and synagogues, but only on Muslims, Islamic schools and mosques, then yes, maybe there is a real cause of concern here.

When we have Muslims seeking to behead Australian police in the name of Islam, then maybe there is something a bit amiss about this religion. Instead of forever making excuses for devout Muslims and Islam, maybe we should do something sensible, like start questioning the very religion itself.

How long will we let our leaders, politicians and media deliberately lie to us when they say killing and violence has nothing to do with Islam, and is not found in the Koran. The only ones who can say such things are those who know nothing about Islam, and have never read the Koran and hadith and siras.

Or, if they have read them, then they are being deliberately deceptive and mischievous here. In either case, they are not to be trusted. They have become stooges of Islam, and apologists for the most murderous religious-political system ever known to man.

They are Islamophiles. They can say nothing wrong about Islam, and can only attack those who do. Islamophobia is not the problem. Islam really is evil, and really is something to be feared and to be concerned about. The real problem is Islamophilia.

That is killing us – literally. The West is dying because of false and distorted notions about Islam. While we can and should reach out to and love individual Muslims, we never should condone, support, or make excuses for the political ideology of Islam.

11 Replies to “Say No To Islamophilia”