I have had the privilege of working on and off with David and Ros Phillips over the past 25 years on pro-family, pro-life and pro-faith activities. I have often shared platforms with them, and done joint projects with them. I was even invited to join the team in a full-time capacity at one point.

So I happen to know a bit about them and their work, and I can say with conviction that Australia would be a whole lot worse off if it were not for their many decades of tireless work and faithful service. Their dedication, zeal, commitment and courage is a sterling example to us all.

That is why it is such a treat to see the 40-year history of FamilyVoice and the work of the Phillips now written up in this fine volume. Indeed, it is a pleasure to encounter so many other great warriors in these pages, many of whom I have also worked with. 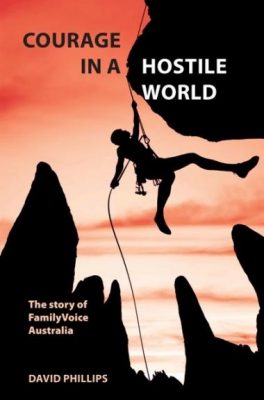 As but one example, I had the honour to recently meet Steve Stevens on his sickbed on the southern coast of England. This British war hero was involved in setting up the Festival of Light in England along with Mary Whitehouse, and became the first South Australia director of FoL in 1978.

But of course the central figures of this book are Ros and David, and God who has led them over all these years. David met Ros at Sydney University in 1960. She helped lead him to the Lord, and they married in 1965. They moved to Adelaide for what they thought would be a brief period, but while there they were called of God to be part of FoL, which opened in June of 1973.

Mass rallies in London in 1971 by FoL were soon to be replicated in Australia. Mary Whitehouse came to Australia in 1973, just months after the launch of FoL, and she spoke to 6,500 people in Sydney, and 2000 women and 4000 youth in Adelaide. A Sunday march and rally saw 12,000 people fill the hillside below Light’s Vision.

The famous English journalist Malcolm Muggeridge had recently converted to Christianity and abandoned his radical leftism. He became involved in FoL, and was brought out to Australia where he spoke to a crowd of 35,000 people in Sydney on October 10, 1976.

Plenty of issues kept the new ministry busy. The 1976 Family Law Bill which basically resulted in open slather on divorce was strongly challenged. Meetings were held, politicians lobbied, petitions signed, and rallies attended. This was just one of many campaigns which FoL was involved with over the years.

Even more direct political involvement occurred when Fred Nile set up FoL in New South Wales, and soon thereafter the Family Action Movement was established, which became the Call to Australia Party in 1977. Fred was elected to the NSW Legislative Council in 1981, and has been there ever since.

The work of David and Ros and FoL continued to grow and expand. In 1985 they adopted this as their motto: “For Christian values and the family – permanence of marriage, sanctity of life, primacy of parenthood and limited government.”

A further clarification of their mission statement came in 1993: “A Christian ministry to our nation promoting true family values in the light of the wisdom of God.” Other state offices were established during this period, and it soon would become a truly national movement.

The issues continued to keep them busy, whether radical feminism, or education, or homosexuality, or euthanasia, or drug legalisation, or economic justice for families, or prostitution, or abortion, or child care, or other important social issues. The work of bringing Christian truth and values to all of society continued unabated.

The 1976 book How Should We Then Live? by Francis Schaeffer had a big impact on David and the team. A ten-part film series came out of this book, and Steve Stevens brought it to Adelaide in 1979 where it was screened. “The project was a great success and inspired many to think about the influence of Christianity on culture for the first time.”

As an early celebration of their 20th wedding anniversary they spent some time in England and Europe in 1984. While there they were able to visit Schaeffer’s L’Abri ministry in the mountains of Switzerland. A L’Abri Fellowship was established later in Sydney in 1989.

Various state and Federal elections also occupied the time of FoL, as well as things like the Australian Bill of Rights of 1985/1986. While it stalled, it was revived in 2007, so another campaign was launched. These sorts of bills were a real threat to freedom, and needed to be opposed. After a long hard fight, the latest version was defeated in 2010.

The battle over brothels was ongoing, and the helpful work of former brothel madam Linda Watson was invaluable as they fought against this evil in SA, WA and elsewhere. Her testimony and that of others helped give them the hard-edged evidence they needed to oppose the legalisation of prostitution.

In 2008 FoL changed its name to Family Voice Australia, and today there are vigorous state offices around the country continuing the original vision of FoL. It continues to grow and expand nationally, and for that we can be most grateful. David concludes this book with these words:

“As I consider the future ministry of FamilyVoice Australia – a Christian voice for the natural family, the Christian faith and democratic freedom in Australia – my prayer is this: May our heavenly Father’s name be honoured and revered. May his kingdom come and his will be done in Australia as it is in heaven.”

Amen. The great value of reading a book like this is to be reminded of just how much of a difference to an entire nation one committed couple (with many helpers along the way) can make. Here is a couple who volunteered to undertake a work for God by faith, and they were used mightily – and still are.

This volume shows us that ordinary people who put Christ and his Kingdom first can be used to achieve extraordinary things, and leave a lasting legacy. Three cheers for David and Ros, and their decades of service to Christ and to this nation. We are all indebted to them.

(The book is available from Family Voice: familyvoice.org.au )

9 Replies to “A Review of Courage in a Hostile World. By David Phillips.”