OK, quiz time. The killer at the Ottawa Parliament today was a recent convert to:

A. Christianity
B. Buddhism
C. Judaism
D. Islam
E. Other

In case this is just all too difficult for you, let me ease your perplexity and spill the beans. The answer happens to be D. 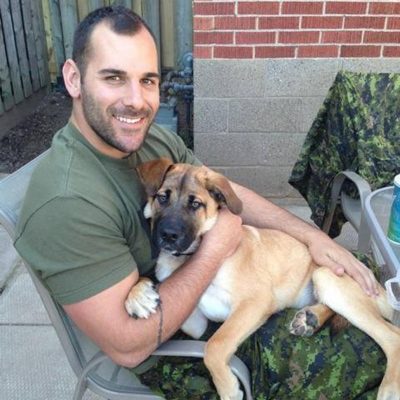 Now look at this face. You will never see it again, except in photos. He is now gone. As are some 240 million others over the past 1400 years. The cause? The most murderous political ideology to ever plague planet earth.

This is the picture of Corporal Nathan Cirillo of the Argyll & Sutherland Highlanders who was murdered today by another maniac screaming Allahu Akbar. Of course the day before another Canadian died at the hands of the religion of peace.

All over the West we see this diabolical religion at work. And all over the West we see useful idiots with their heads in the sand, insisting that all this has nothing to do with Islam. They are living in denial, and the only question left to ask is this: How many more innocent men, women and children have to die before we snap out of our delusions?

Friends and family of Nathan will miss him terribly. Even his dog will. But he is just one human face we can put to the vast numbers. Most people killed in the name of Islam we will never know anything about. But we at least can get some facts right here. So consider this number:

That is 24,168. Remember that number. That is the number of jihadist terror attacks since 9/11. And even now this figure is no longer accurate – it is already out of date.

Yet we have clueless wonders telling us Islam is a religion of peace, and we have wilful fools telling us what happened in Ottawa was just an isolated incident. In times of terror and crisis, the ability to think clearly is incumbent upon us. Sadly too many folks do not think clearly. When it comes to Islam, their minds turn to mush.

Thankfully not all people are so duped, deceived and dhimmified. One Canadian who has been warning us for years about this has just penned a brand new piece which is worth sharing from. Mark Steyn says this:

The sub-title of my new book is “Don’t Say You Weren’t Warned”. I have been writing for over a decade now about the west’s wannabe jihadists, often born and raised in Canada and America and Britain and Australia and Europe, some of them converts – or “reverts”, as they call them. Throughout that period, the multiculti delusionists have insisted that Islam’s contribution to the diversity mosaic is no less positive than that of Poles or Italians. Now we have pure laine Quebeckers and Nigerian South Londoners converting to Islam because it’s the coolest gang on the planet. And one consequence of that is that a relaxed, open capital city will descend into the same panopticon security state as Washington. I love Ottawa – I know every yard of that stretch of Wellington Street connecting Parliament and the Cenotaph: Chateau Laurier is where I always stay when in town; not so long ago I walked past the war memorial with a senior Minister of the Crown and we talked about how simple and dignified and profoundly moving it was; and during my battles with the “human rights” commissions I had the honour of testifying to the House of Commons and strolling that same Centre Block corridor that that Allahu Akbar loon rampaged down today.
That security-lite Ottawa is gone, and that is a loss. But there will be others in the years ahead. Because the price of welcoming and incubating and growing Islam in the west is, ultimately, the loss of everything else.

“The price of welcoming and incubating and growing Islam in the west is, ultimately, the loss of everything else.”

Everywhere we see evidence of this. Every day more innocent people are slaughtered in the name of this primitive blood cult. Yet the powers that be and our media elites still will do everything they can to defend Islam and shift the blame elsewhere.

When we do the enemy’s work for them, then the end is coming very soon indeed.

Weep for Nathan Cirillo. Weep for the millions of others killed in the name of this barbaric monstrosity. And weep for the clueless wonders in the West who are giving them a free pass to keep on doing their thing.

16 Replies to “This Is What Islam Does”