Gotta love reading through the book of Acts again. It is jam-packed with spiritual treasures. Having just reread Paul’s farewell address to the Ephesian elders as found in Acts 20:17-38, I feel compelled to look at this amazing speech in more detail.

Comprising only around 400 words, it contains many vital biblical truths, and we learn much about the faith here. Paul had finished his period of ministry in Asia Minor and was heading to Jerusalem, so here he addresses the elders in this farewell sermon, entrusting them with the future of the church. 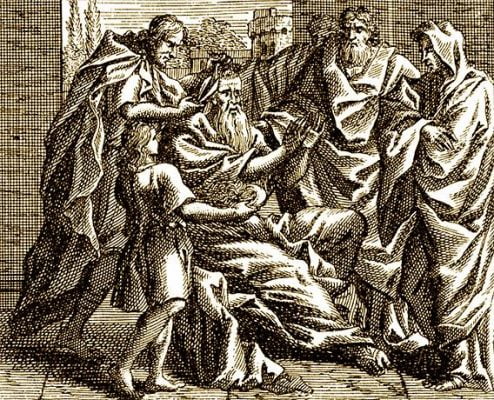 It is the only case in all of Acts of Paul giving a sermon to fellow Christians. As such, it is quite different from his other sermons. As Tom Wright says,

Here we see Paul in a different mode, vulnerable, meditative, steady in his faithful perseverance but with no hint of triumphalism, of carrying all before him in a blaze of glory. He is quiet, not combative; reflective, not argumentative. It is as though we have finally found him, no longer running around in a blur, but sitting for long enough to have his portrait painted. And what a portrait.

One can divide this segment into several parts: his personal testimony is recorded in vv. 18-24 and vv. 33-35. In between is his charge to the elders. In this short section of Scripture we come to understand so much about Paul – the man and the missionary. Let me first highlight a few bits from his testimony:

Twice he speaks about the tears shed as he ministered to these souls (vv. 19, 31). His love for the people was evident, and it was reciprocated when he left: “They all wept as they embraced him and kissed him” (v. 37). James Montgomery Boice said this about this aspect of Paul:

I think that when Paul says he served the Lord with tears he does not mean that he was given to frequent outbursts of emotion, except perhaps in prayer. He means that he was what we would call a man of great empathy. . . . Francis Schaeffer made a great deal of tears. He believed in the need to separate from unbelief, but he always said, ‘If we separate, it must be with tears. And if we speak truth that hurts, it must be with tears.’ He was right in that. He meant that we must empathize with others.

Just hours ago I sat in a cafe with a brave young Christian woman who is standing strong on the issue of homosexuality as a city councillor. She was in tears as she spoke of all the opposition and enmity she is getting for her stance. All her colleagues – even so-called Christian ones – are turning against her. I was nearly moved to tears as well, and I prayed for her on the spot.

I like what R. C. Sproul says in this regard:

That was Paul’s record. To the Corinthian congregation he wrote that he had been with them in tears, in their sufferings and afflictions (2 Cor. 2:4). Paul did not go to people simply as a scholar instructing them in theology; his heart was with them. He wept and prayed with them and endured all manner of attacks and suffering from hostile hands for their sakes.

Also, Paul did not shy away from proclaiming what was essential to them: “You know that I have not hesitated to preach anything that would be helpful to you but have taught you publicly and from house to house.” (v. 20). And repentance, as usual, was a core part of his message: “I have declared to both Jews and Greeks that they must turn to God in repentance and have faith in our Lord Jesus” (v. 21). David Peterson comments on this theme:

In an age when many are searching for different ways to attract people to church and make an impact on their society for Christ, it is salutary to recall Paul’s formula, both for evangelism and the nurture of believers (cf. Col. 1:28-29). His preaching and teaching consistently issued in a call for repentance and faith, in response to God’s gracious, saving initiative in Jesus Christ (cf. vv. 24, 28, 31, 32). Genuine faith demands repentance, and sincere repentance will continue to flow from saving faith.

Moreover, Paul realised that a constant part of his life and ministry was characterised by hardship and persecution (v. 23). Yet in spite of all the opposition, his aim was to “finish the race and complete the task the Lord Jesus has given me” (v. 24).

In his exhortation to them he says a number of crucial things. He reminds them that he has not failed to ‘proclaim the whole will of God’ to them (v. 27). As Sproul writes: “I worry that when I stand before Christ at His judgment seat, He is going to say, ‘R.C. what did you keep back? What were you afraid to preach? How much of My counsel did you declare to the people under your care? It was your task when I consecrated you to hold nothing back, to proclaim the whole counsel of God’.”

Or as Wright comments: “Nobody will ever be able to say that he trimmed the message to make it easier to get it across or more palatable for his hearers. This was his commission from God, and he had been faithful to it.”

Paul also reminds the elders that they are to feed the flock and guard against wolves (vv. 28-31). John Stott comments:

So the shepherds of Christ’s flock have a double duty: to feed the sheep (by teaching the truth) and to protect them from wolves (by warning of error). As Paul put it to Titus, elders must hold firm the sure word according to the apostolic teaching, so that they would be able both “to give instruction in sound doctrine and also to confute those who contradict it” (Titus 1:9). This emphasis is unpopular today. We are frequently told always to be positive in our teaching, and never negative. But those who say this have either not read the New Testament or, having read it, they disagree with it. For the Lord Jesus and his apostles refuted error themselves and urged us to do the same. One wonders if it is the neglect of this obligation which is a major cause of today’s theological confusion. If, when false teaching arises, Christian leaders sit idly by and do nothing, or turn tail and flee, they will earn the terrible epithet ‘hirelings’ who care nothing for Christ’s flock (Jn 10:12ff). Then too it will be said of believers, as it was of Israel, that “they were scattered, because there was no shepherd, and…they became food for all the wild animals” (Ezek 34:5).

The final three verses of this episode are well worth sharing here: “When Paul had finished speaking, he knelt down with all of them and prayed. They all wept as they embraced him and kissed him. What grieved them most was his statement that they would never see his face again. Then they accompanied him to the ship” (vv. 36-38).

As Sproul notes, “It is amazing how many parallels there are between Paul’s message here to the Ephesians and Jesus’ message in the upper room to His disciples when he announced that in just a short while they would see Him no more although His departure would ultimately be to their benefit. In that regard, Paul echoed those words of Christ to his disciples.”

Study it, meditate upon it, and ask God that you too might be raised up as another Paul.