OK, another crisis, another token gesture by the West’s super rich elites. But hey, at least it makes ’em feel good. While it might assuage their guilt feeling about living like kings while so much of the world is in abject poverty, I for one am not all that impressed. 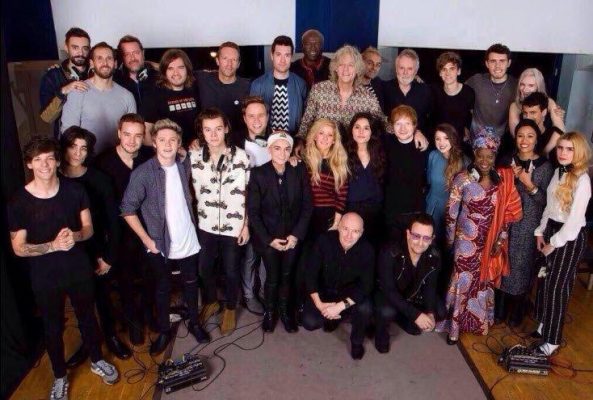 I refer of course to the latest shindig, Band Aid 30, put together by Bob Geldof and Co. Another gathering of uber-rich pop stars who want the world to think they are real humanitarians. I have often written about these sorts of efforts, and have pointed out the double standards, the ego-tripping, and so on.

And I am not alone in my concerns. Quite a few folks have blasted this latest effort, and for various reasons. And many of these critics come from the continent Geldof is claiming to help. So I will let them speak here. One article begins this way:

A growing number of Africans are uncomfortable with what some call “the white saviour complex”. Bob Geldof may well be the only writer of one of the best-known songs of all time to admit that his multi-million selling anthem is truly awful and that he now finds himself irritated when he hears it on the radio. “I am responsible for two of the worst songs in history,” the shouty Irish singer and activist said in 2010. “One is ‘Do They Know It’s Christmas?’ and the other one is ‘We Are The World’.”
But that hasn’t stopped him re-recording the former, originally released in 1984 to raise funds to fight to the Ethiopia famine, and now incongruously synonymous with Christmas in Britain. The problem is that a lot of people agree with his assessment, and many of them are from countries on the very continent he is trying to help.

Various voices are heard in this article. Abdullahi Halakhe, a policy analyst in Kenya says:

Do you know it’s Christmas? According to some estimates, the Christian population in Nigeria alone is almost three times the number of Christians in England and Wales. How couldn’t they know it’s Christmas? Bishop Arinze from Nigeria was at one point even in the running to be the next Pope.
Just sample the grotesque tone of the lyrics, dripping with the “White Man’s Burden.” It was awful 30 years ago, and it’s awful today. If they wanted a spike in record sales because we are nearing Christmas, this was not a great move.
What do you think of Western charity songs like this as a response to African emergencies? I think the fundamental problem with the “saving” Africa posture is that it is predicated on the notion that Africa/Africans are agency-less, which for me is problematic because it is the continuation of never-ending paternalistic tendencies towards Africa.

In May, Liberian musicians Samuel ‘Shadow’ Morgan and Edwin ‘D-12’ Tweh wrote and produced ‘Ebola in Town’. The lyrics were informative and the percussive beats so hot that it became an immediate hit. And just last month, the song ‘Africa Stop Ebola’ was produced by Malian, Ivorian, Congolese, and Guinean musicians.
We got this, Geldof, so back off. If you really want to help, buy a gazillion CDs of the two songs and send them to your friends as stocking stuffers with a note that says: “African solutions to African problems”. Instead of trying to remain relevant, Geldof and co. would do well to acknowledge the ingenuity of local artists and stop trying to steal the limelight!

I think such celebrity-led initiatives have come to do more harm than the “good” they were intended for. And, even worse, is that it’s hard to imagine that the people behind it do not see the harm they are doing. Ethiopia has for the last few years been trying extremely hard to change its image as a poster child for poverty. It has been trying to depict a new bright image to the world so as to attract tourists and foreign direct investment. But this uphill battle is always hindered when such reminders of the past appear again on the screens of the people that are trying to be persuaded.
Africa’s only hope of success against poverty is through sustained, structured and equitable economic growth brought about through things such as investment and tourism. It’s hard to imagine how a few dollars raised every so often can possibly outweigh the damage it does by blemishing the continent’s image.

If the purpose of Bob Geldof and others is really to help the Ebola response rather than burnish their own profiles as modern day saints, they would donate money behind the scenes. The money that will be raised through this Ebola single could easily be raised by these rich musicians having a whip round among themselves and their friends.

Columnist Bryony Gordon is also scathing (and rightly so):

Geldof is here to save West Africa from Ebola…. In the shallow, self-promoting world of celebrity, the simple and silent act of handing over money to charity is not the done thing – that’s what we impoverished plebs do. Instead, the rich and famous donate their precious time, and for this they expect to be celebrated and congratulated, as if before they flashed their expensively whitened teeth in the video for a song, we had no idea that Ebola was a problem, or that thousands of Africans were spending their last days on this earth in unimaginable horror, bleeding from every orifice, unable even to be comforted by their family and loved ones.
“Give us your f***ing money,” was Geldof’s message way back when, and it is his message now – you all dig deep and give up your hard earned cash because these famous people who make millions singing songs have deigned to give up a few hours of their time on a weekend. “We really can stop this… foul little plague,” said Geldof when he appeared on BBC Breakfast yesterday morning, with no mention of the Disasters Emergency Committee, which has raised £20 million for the region, or Medecins sans Fronteries, who have been out there since March.

Nobody wants a world full of Ebola, but nor do I want a world full of Malaria and HIV and Tuberculosis and numerous other diseases – not to mention conditions such as hunger and poverty – that are destroying the lives of many millions of Africans every day. Certainly, I don’t want to be told how to behave philanthropically by a man worth an estimated £32 million, a man who is said to use tax avoidance schemes (it is telling that when a journalist asked him two years ago how much tax he paid, Geldof exploded at her, saying: ‘My time? Is that not a tax?’ Well, no, Bob, it isn’t).
I don’t want to be implored to give charitably by a band that travels in separate private jets because they don’t get on (One Direction), or by a man who avoids Irish taxes while simultaneously telling the Irish government to help developing countries (Bono). “It really doesn’t matter if you don’t like this song,” said Geldof as he launched it, “what you have to do is buy this thing.” But do we? Really? If we don’t, does this make us unfeeling and uncaring, or does it mean that we have already donated money to the cause, or a different cause, even?
This, I think, is my main objection to Band Aid 30: it is all predicated on a belief that the British public are mean-spirited and uncharitable, when in actual fact nothing could be further from the truth. It’s time the likes of Geldof stopped asking us to give money.

Finally, see my last link below for “10 Facts for Bob Geldof”. Pity Sir Bob is so rather clueless here. But his ignorance seems proportionate to his arrogance.