I get it all the time: mealy-mouthed Christians who say I am too radical, too confrontational, too troublesome. Oh really? And I am supposed to be what? A quiet, mousy, do nothing, say nothing coward like they are? Sorry, not interested in the craven lifestyle of these armchair critics.

Besides, I certainly am not supposed to model my life after them. We already have a biblical model of what real Christianity is supposed to look like. It is called the book of Acts. If you want to know what genuine discipleship and Christian proclamation looks like, just read this book.

It is utterly staggering just how much mischief these early disciples got themselves into. Everywhere they went, they stirred things up, caused a massive reaction, and blew the lid off decency and propriety. They were not the least bit interested in pleasing men, keeping things nice and quiet, or maintaining the status quo.

Everywhere they went the set off a fire storm. Indeed, on a regular basis, riots broke out as they fearlessly and boldly proclaimed the gospel of Jesus Christ. The really amazing thing is, if these disciples were around today, most Christian leaders would condemn them.

Most of our comfortable don’t-rock-the-boat churches today would want nothing to do with these guys. These disciples would be told that they are too controversial and too provocative, and would be shunned altogether. They would be accused of being offensive, judgmental, narrow-minded and bigoted.

And that is why the church in the West today is accomplishing so little for the Kingdom. Men-pleasers never please God nor do great things for Jesus. They simply exist to tickle the ears of false professors of religion. I for one know on whose side I would rather stand.

Just go back and read the book of Acts – as if for the very first time. Let it sink in big time what an extremely radical, non-compromising and courageous bunch of men these guys were. They were utterly fearless, and they did not give a rip about how many people were offended along the way.

They had one aim only: to preach the gospel of Jesus Christ, and to suffer for his name’s sake. And because of that, they had a reputation: ‘These men have caused trouble all over the world’. Now that’s the sort of reputation I want to have.

The context of this verse is Acts 17:4-8 where we read about Paul and his companions in Thessalonica:

Some of the Jews were persuaded and joined Paul and Silas, as did a large number of God-fearing Greeks and quite a few prominent women. But other Jews were jealous; so they rounded up some bad characters from the marketplace, formed a mob and started a riot in the city. They rushed to Jason’s house in search of Paul and Silas in order to bring them out to the crowd. But when they did not find them, they dragged Jason and some other believers before the city officials, shouting: “These men who have caused trouble all over the world have now come here and Jason has welcomed them into his house. They are all defying Caesar’s decrees, saying that there is another king, one called Jesus.” When they heard this, the crowd and the city officials were thrown into turmoil. 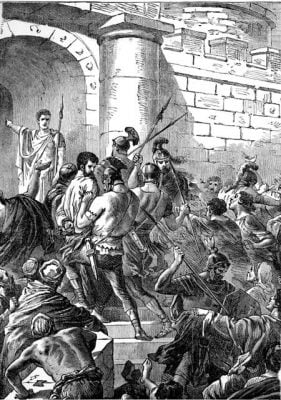 Another clear example of this is found in Acts 19 where we read about Paul’s time in Ephesus. Sure enough, another riot broke out. I cannot offer that whole story here, but a few verses illustrate what was happening:
Acts 19:29 Soon the whole city was in an uproar.
Acts 19:23 About that time there arose a great disturbance about the Way.

One more episode: in Acts 21:27-36 we learn about Paul’s arrest in Jerusalem. Once again, mayhem seemed to follow him wherever he went. As we read in Acts 21:30, “The whole city was aroused, and the people came running from all directions.” Or as it says in v. 31, “the whole city of Jerusalem was in an uproar”.

Indeed, “When Paul reached the steps, the violence of the mob was so great he had to be carried by the soldiers” (v. 35). Now that’s some pretty good preaching when you can get that sort of reaction! These are just some of the stories we could mention in Acts. These guys certainly made a difference.

Simply to be a Christian in some places means there is always a risk of riots breaking out and of horrible persecution occurring. Consider for example this recent horrible headline: “Pakistani Christians Burned Alive Were Attacked by 1,200 People: Kin”. The story opens:

A mob accused of burning alive a Christian couple in an industrial kiln in Pakistan allegedly wrapped a pregnant mother in cotton so she would catch fire more easily, according to family members who witnessed the attack. Sajjad Maseeh, 27, and his wife Shama Bibi, 24, were set upon by at least 1,200 people after rumors circulated that they had burned verses from the Quran, family spokesman Javed Maseeh told NBC News via telephone late Thursday. Their legs were also broken so they couldn’t run away.
“They picked them up by their arms and legs and held them over the brick furnace until their clothes caught fire,” he said. “And then they threw them inside the furnace.” Bibi, a mother of four who was four months pregnant, was wearing an outfit that initially didn’t burn, according to Javed Maseeh. The mob removed her from over the kiln and wrapped her up in cotton to make sure the garments would be set alight.

Wow. But in the West we start whining when the sermon goes over 20 minutes. We are so fixated on false gospels which insist we can have our ‘best life now’ that we think Christianity is all about living the good life, a life of ease, with lots of entertainment and celebrities.

The crying need of the church today is to get back to its roots. Not the heretical men-pleasing baloney that passes for Christianity today in so many places, but real, authentic, and very costly New Testament Christianity.

15 Replies to “Riots in the Streets: Just Another Typical Day”