We expect secular humanists and others like them to celebrate the idea of tolerance as the greatest good, but sadly many believers have also hopped on to this foolish bandwagon. It is as if the greatest virtue is now tolerance and the greatest vice is intolerance.

Well, it is time for some straight thinking here. In fact, it’s time to get biblical as well. Just today I read the words of Jesus in which he praised intolerance. Yep, you heard me right. In his words to the Church in Thyatira he praised their ‘faith, service and perseverance,’ but he went on to harshly rebuke them:

“Nevertheless, I have this against you: You tolerate that woman Jezebel, who calls herself a prophet. By her teaching she misleads my servants into sexual immorality and the eating of food sacrificed to idols” (Revelation 2:20). These believers were tolerating something which they should have been very intolerant about. 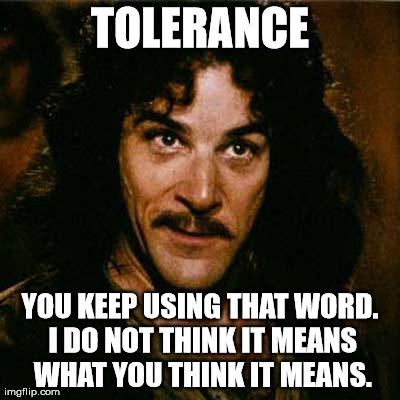 The truth is, God cannot and will not tolerate anything that is evil, and neither should we. There are plenty of other biblical texts one could appeal to in this regard. Let me mention just a few more. In Habakkuk 1:13 we read this about Yahweh: “Your eyes are too pure to look on evil; you cannot tolerate wrongdoing.”

A holy and righteous God can have nothing to do with sin and evil. He certainly does not tolerate it. And neither should we embrace anything and everything. Some things we must actually resist. As Paul put it in Romans 12:9: “Hate what is evil; cling to what is good.”

Yes, we are to hate certain things, just as God hates certain things. We are never to tolerate sin, but are to actively oppose it, certainly in our own lives, but in society at large as well. If we do not oppose evil, and remain tolerant of evil, then we are asking for trouble. As Dennis Prager has remarked, “If we continue to teach about tolerance and intolerance instead of good and evil, we will end up with tolerance of evil.”

Biblical Christianity has always been intolerant in the right sense of the word. For example, the story of Christian mission has been one of intolerance: hating evil practices that harm people, and being intolerant of idolatrous and deadly customs and practices. Missionaries in India for example opposed the evil social practice of suttee.

In today’s amoral mindset, such wholesale condemnation of this custom would be seen as “intolerant”. Well, I can tell you that there are plenty of Indian women today who are very grateful indeed for such intolerance. As Mark Steyn has said:

Once upon a time we knew what to do. A British district officer, coming upon a scene of suttee, was told by the locals that in Hindu culture it was the custom to cremate a widow on her husband’s funeral pyre. He replied that in British culture it was the custom to hang chaps who did that sort of thing. There are many great things about India – curry, pyjamas, sitars, software engineers – but suttee was not one of them. What a pity we’re no longer capable of being ‘judgmental’ and ‘discriminating’.

Add to that, ‘intolerant’. And all these qualities go together. We are in fact to judge, to discern, and on many occasions, be intolerant. But all these elements of a healthy and properly functioning society are in short supply nowadays. John Hawkins has just written a piece on our unhealthy and dangerous obsession with tolerance. His concluding paragraphs are worth sharing here:

Tolerance doesn’t have to be a synonym for stupid, but it is for too many people – and the further down the rabbit hole you go, the worse it gets. Seung-Hui Cho, who killed 32 people at Virginia Tech, had once written a school report about wanting to “repeat Columbine” and was removed from class for being dangerous, but nobody took any action until it was too late. Ismaaiyl Brinsley actually boasted on social media that he intended to kill police officers before he murdered two NYPD officers. Nidal Hassan was openly calling himself a “soldier of Allah” and reaching out to Al-Qaeda before he murdered 13 soldiers at Fort Hood.
Know why nothing was done in any of those cases? Because Americans are obsessed with tolerance. We turn a blind eye to every ignorant, foolish, obnoxious and unhealthy behavior you can imagine all in the name of tolerance.
Americans would rather be falsely smeared as racist, have their religion insulted, have their children’s minds poisoned with garbage and see their country go down the tubes than be thought of as intolerant. We’ve become so tolerant that we’re destroying ourselves. We’ve got people openly siding against our country in wars. We’re defending traitors who publicly release our national security secrets. Protesters are walking down the street with police protection while they chant for dead cops.
How about a little less tolerance and a little more common sense? How about we start being less worried about being “fair” to people behaving badly and a little more worried about those being hurt by those behaving badly? You may have heard someone say, “The Constitution is not a suicide pact.” Well, in a time when tolerance has come to mean that you have to embrace lawlessness, encourage cop killers and celebrate degeneracy, then it’s time to accept that tolerance isn’t a suicide pact either.

Yes exactly right. For too long we have been too tolerant – especially of all the wrong things. We are in desperate need of a good, healthy dose of intolerance. It was G. K. Chesterton who once said that “Tolerance is the virtue of the man without convictions.”

When you don’t give a rip about anything, then you can be as tolerant as you like. But the moment you start to care about something or someone – be it your property, your wife, your children, or your neighbourhood – then you find yourself very quickly becoming intolerant: intolerant of anything or anyone which would harm or endanger that which you love.

My favourite line about “tolerance” is still that of the late great English writer and theological lay person, Dorothy Sayers. She put it this way:

And sadly, that does not just describe most people in the world today, but plenty of folks sitting in our church pews as well. How many Christians just don’t care about anything but themselves? The apathy, indifference and lack of love among so many Christians brings us right back to the words of Jesus in Rev. 2:20.

Away with all this damnable tolerance. I say, three cheers for intolerance.

16 Replies to “It’s Time To Get Intolerant”