I mentioned to a large group of Singaporean leaders this week that Christians are living in enemy occupied territory, and that we have every right to seek to take back land lost to the enemy. This world belongs to only one true claimant, the Lord Jesus Christ.

Satan is a usurper and has no legitimate claims to this world, a world that belongs to God by reason of both creation and redemption. In this regard I mentioned Colossians 1:20, where we read that Christ seeks to “reconcile to himself all things”. All of creation is affected by the fall, and all of creation is meant to be reclaimed in Christ.

He is Lord of all, and we need to help see his lordship extended to every area of life. Too many believers wrongly think that we are to have an other-world existence, with all of our attention on heavenly matters. But ours is to be a this-world faith, one that has a very real impact on all aspects of life.

Yes, the enemy has come to kill and steal and destroy. Yes he has helped to mess things up big time. But he is an illegal alien, a usurper, and an intruder. We need to roll up our sleeves and with God’s grace take back territory which he has plundered.

We are the Resistance, taking on these enemy forces in our land. While there might be an occupying army in our midst, we certainly do not need to bow down to it or make life easy for it. In fact, we need to resist it, undermine it, and do all we can to roll it back.

I want to speak about this in relation to the amazing nation of Singapore which celebrates its 50th anniversary this year. Biblically speaking, it is enjoying its Year of Jubilee. As I have told many audiences here over the past two months, Singapore really is at a crossroads.

It has a short window of opportunity to decide which way it will proceed. Will it be all that so many Christians have prayed for it to be, or will it simply go the way of all the rest of the West, and head into serious decline. Back in 1978 Billy Graham told the Singaporeans that their nation is the Antioch of Asia.

Whether it goes this way in glory, or repudiates all this for a mess of pottage remains to be seen. But as I told my most recent audience here, “Please do not repeat our mistakes”. I gave a quick history lesson in how the West lost its godly heritage and is now under enemy occupation. 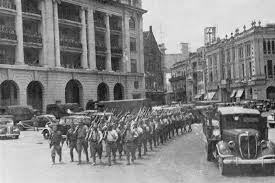 I implored the Singapore Christians to not throw away their heritage and settle for the miry pit the West has become. Keep Singapore free from these various ideological and spiritual occupying forces. And they would have good reason to pay heed to this, having not all that long ago experienced real enemy occupation.

I refer to the Japanese occupation of Singapore from 1942 till the war’s end in 1945. Since I am now in Singapore, and away from my library, I have to do something I try to avoid: rely just on Wikipedia. But to save time and get a rough picture of what life was like then, I will use their article on this. Here is part of that story:

The Japanese captured all of Malaya during the Malayan Campaign in little more than two months. The garrison defending Singapore surrendered on 15 February 1942, only a week after the invasion of the island commenced. British Prime Minister Winston Churchill called the fall of Singapore “the worst disaster and largest capitulation in British history”.
The Kempeitai (the Japanese military secret police), committed numerous atrocities against the common people. They introduced the system of “Sook Ching”, which means “purge through purification” in Chinese, to get rid of those deemed to be anti-Japanese. The Sook Ching Massacre claimed the lives of between 25,000 and 50,000 ethnic Chinese in Singapore and Malaya. These men were rounded up and taken to deserted spots around the island and killed systematically. Moreover, the Kempeitai established a network of informers around the island to help them identify those who resisted….
To remove Western influence, the Japanese set up schools and forced the people to learn their language. Textbooks were printed in Japanese. Every morning, the children had to stand facing the direction of Japan and sing the Japanese national anthem.
In the cinemas, only Japanese movies and propaganda films were shown. These films showed the virtues of the Japanese and made fun of the British. Going to the cinemas at all had its dangers, since the Japanese might suddenly appear and take away young men to work on the Death Railway. Sometimes, they would plant themselves in the cinemas and would listen secretly to conversations, hoping to overhear anti-Japanese remarks.
The local Chinese and English newspapers had very little local news. Most of what was reported was the Japanese version of the war and pro-Japanese speeches. Radio stations were controlled by the Japanese and radio owners could listen only to local broadcasts. Tuning in to foreign broadcasting stations was done at great risk. Those caught doing so were severely punished or even killed.

This history has parallels with the way in which the once-Christian West has largely been taken over and subdued by forces hostile to the biblical worldview. Rifles and bayonets may not have been involved, but very real subjugation has taken place nonetheless.

Alien and hostile values and cultural and social conditions have overtaken much of what was formerly there. Now the forces of Political Correctness and secular humanism effectively control things much as the invading Japanese did, with witch hunts, police checks, and purges of everything and everyone who do not hold to the new reigning ideology.

Those who hold to the older paths are treated as pariahs, outcasts, subversives and recalcitrants. Those who do not fully embrace the new world order are punished in various ways, and no contrary thinking is allowed in so much of the West.

New reigning ideologies instituted by the secular left are expected to be accepted and applauded. Those who refuse are increasingly facing the full force of the law. Those who dare to differ on matters such as homosexuality and other shibboleths of the new regime are quickly and efficiently put in their place.

The West is now occupied territory, and those who still hold to the Judeo-Christian worldview are quickly becoming a persecuted and abused minority. Sure, there are pockets of resistance – and I am proud to identify myself as part of the Resistance – but it is getting to be costly business. In the same way there was some resistance to the Japanese in Singapore, but that too was very costly.

My prayer is that Singapore will not have to go through what so much of the West is now going through. This small nation has managed to hold the line on various fronts, and has resisted many of the siren calls of the hardcore secular left.

But things are slowly weakening, bending and starting to cave in here. Can the line be held? Can the enemy occupiers barking at the gates be held off for much longer? Will Singapore continue to stand, or will it go the way of all the West into slow but certain decline and perhaps oblivion?

That choice is largely up to the Christian community here. If they are anything like the 600 pastors and leaders I spoke to this week, we can be hopeful indeed. But not all may be so committed and radical for Jesus. So during this year in which 50 years of nationhood is celebrated, the church in Singapore needs more than ever to get on its face before almighty God and cry out for his grace, his mercy and his strengthening hand.

Will this land indeed be the Antioch of Asia and do so much of value for the Kingdom, or will it be yet another casualty of history? That decision lies largely in the hands of the Singaporean believers. I will pray for them and am happy to offer any help that I can to assist them in this process if so required.

Join with me please in praying for this great nation, and for the church in this land. May it fulfil its godly destiny to the glory of God, and for the good of Asia and beyond.