The fact that there are a lot of really dumb, unhelpful, and just plain unbiblical things being said by so many Christians today is quite telling. It is an indication of how poorly we are doing in getting contemporary believers to actually think carefully, study Scripture regularly, and resist the worldview of the surrounding secular culture.

So much of what we hear some believers saying nowadays is indistinguishable from what the average pagan on the street is saying. How we have come to such a place where the Christian mind has so greatly shrunk, if not disappeared altogether, is not something I can here explore. 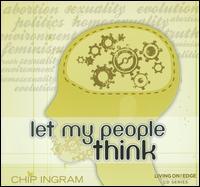 But it is a tragic reality nonetheless. ‘Let my people think’ is the crying need of the hour. To get believers to move beyond mere emoting, and to actually think for the glory of God is absolutely vital in this day and age. But it seems to be as rare as it is vital.

Here are five of the more appalling things I hear all the time from some clueless Christians who seem to just follow what the worldview of secular humanism dishes up instead of what the Word of God actually teaches. These five are just mindless clichés and useless Christian copouts:

We hear this so often – usually when a believer is trying to justify or make excuses for sin. But it does not in the least get them off the hook. Of course God knows our hearts – he made them after all, and he is all-knowing! Moreover, he has already told us long ago what our hearts are like.

As we read in Jeremiah 17:9 (KJV): “The heart is deceitful above all things, and desperately wicked: who can know it?” Even the redeemed heart is capable of being deceived. That is why Proverbs 4:23 says, “Above all else, guard your heart.”

So of course God knows our hearts. The real question is, do we really know our own hearts? It is so very easy for self-deception to take place that we all need to be very careful here. Indeed, a course of action is not right or wrong depending on how we feel about it, but how it lines up with the Word of God.

I get this all the time of course from secularists and atheists. But it is so disappointing when Christians actually throw this at you. What they usually mean when they say this is something like this: “Well, you have used a lot of biblical data here. I don’t know how to answer you, and I don’t have any Scriptures of my own, so I will just attack you instead”!

People who are unable to defend their position scripturally will often resort to this cheap copout. It beats admitting that you are wrong, or that you may need to actually study the Bible for a change. And it completely misses the point anyway.

Of course in one sense we all have our own interpretations. But the issue is to make sure – as much as is possible – by careful reading and study, by proper exegesis, and by the aid of the Holy Spirit, that our interpretation is as accurate and correct as it can be.

And so often a particular biblical passage is just quite plain and straightforward anyway; thus it is not so much the interpretation of it that matters but just accepting it, believing it and obeying it. As Mark Twain once quipped, “It ain’t those parts of the Bible that I can’t understand that bother me, it is the parts that I do understand.”

“We should not force our morality onto others.”

This too is something we expect to hear from non-believers, but certainly not from Christians. It is just another bumper-sticker cliché which needs to be put out of its misery. Standing up for righteousness and biblical values is of course something no believer should have a problem with.

And no one is forcing anything on anyone. To enter a public debate on the issue of, say, homosexual marriage, is just that: a debate. It is not coercing anyone. It is called living in a democracy. Christians have as much right to share their concerns in the public arena as anyone else.

Indeed, why should only the secularists and theophobes be allowed to present their case in public? And far too often they are not just presenting their case, but they are the ones trying to force their morality down the throats of everyone else, whether they like it or not.

Standing up for the unborn who are being slaughtered in the millions, or for God’s institutions of marriage and family happens to be our basic biblical obligation as we seek to be salt and light in a needy world. This has utterly nothing to do with forcing our morality on anyone.

“We are just called to love people.”

Until we actually define what is meant by the word love, we cannot go any further with this one. Sadly, for far too many believers today, their understanding of love has absolutely nothing to do with the biblical understanding of love. They have simply embraced the worldly notions of love, and see it as just accepting and embracing everyone and everything.

Loving a drug addict does not mean condoning and promoting his deadly addiction. You really love the addict when you want to see him set free from his deadly addiction. In the same way we love homosexuals enough to tell them they don’t have to stay trapped in their high-risk and dead-end lifestyle.

Often the most loving thing we can do as a believer is to warn others. We must warn fellow believers if they are involved in known, unrepented of sin or false doctrine. And we must warn the non-believer of the wrath of God and hell to come if they do not repent.

Not to make such vital and biblical warnings proves that we do not love these people at all. Real Christian love always goes hand in hand with proclaiming biblical truth. Not to speak truth and not to make such warnings when needed puts us in a very dangerous place, as Ezekiel 3 and 33 make so very clear.

This is of course the Mount Everest of all mindless Christian copouts. It is the most heard and the most ridiculous thing you will ever hear a Christian foolishly say. Indeed, I have already penned numerous articles on this issue. Even though I and others have dealt with this so often, it still gets churned out ad infinitum, ad nauseam.

Matthew 7:1 is of course the most abused and misused scripture out there. As usual, a text without a context is a mere pretext. And the context to this verse is crystal clear. Jesus is not in the least telling us we cannot judge. He is instead warning us against hypocritical judgment.

That is all that Matthew 7:1-5 is trying to convey. In fact, in the very next verse we read this: “Do not give dogs what is sacred; do not throw your pearls to pigs.” Umm, guess what? That is a judgment call. We must judge, or discern, who are dogs, who are pigs, what is sacred, and what are pearls.

These are just five of the really dumb things you will hear Christians saying. I could easily come up with dozens more. But the point should be clear: the great need of our Christian churches today is to actually train our people to think, to reason, to be diligent students of Scripture, instead of just running on emotion and all the mindless baloney which the secularists are offering.

If we are unable or unwilling to actually think biblically, to think clearly, to think rationally, to develop a biblical worldview, and to be serious students of the Bible, then we might as well just stop pretending we are true disciples of Jesus Christ.