There will always be disagreement amongst Christians. Indeed, there is nothing wrong with differences of opinions, at least on non-primary biblical doctrines. But one aspect of Christian maturity is learning when and where to pick your fights. Learning what battles are important, and which are not, is part of growing in wisdom.

And learning how to let certain issues go through to the keeper – as the saying goes – is also invaluable. The truth is, one need not engage in every controversy, take sides in every battle, and respond to every questionable thing you encounter.

Sometimes unity is the preferred option. Sometimes standing for truth, even at the risk of breaking Christian unity is preferred. And having the wisdom to know which is the right path is obviously very important. Those involved in public ministry know full well that there can be a million battles a day, and caution and discernment are always needed. 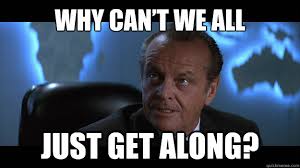 I certainly know all about this. Not a day goes by when I am not attacked by various non-Christians. That is to be expected. But also not a day goes by when some Christian wants to pick a fight with me, or has gotten bent out of shape about something I said, or has taken offence, and so on.

I can fully understand why so many Christians never ever open their mouths and discuss anything. It is a lot more quiet and peaceful that way. You avoid a lot of wars! Thus we regrettably have most Christians remaining silent, and not standing for anything, just for fear of all the abuse that might come.

They prefer to avoid all controversy, all disputes, all debates, and all hot potato issues, in order not to rock the boat or get anyone upset. That is one way to go, but not the biblical way. We must all stand for biblical truth, even if it is costly.

But yes, I know how difficult that can be. To stand for anything will risk attacks, division, animosity, and stirring the pot. To have firm convictions about anything will always make waves, ruffle feathers, and create enemies. It can’t be helped.

Indeed, I am surprised that I still have any friends left! Really. At times it is not easy being a Christian. There are so many different camps and different groups and different emphases and different shibboleths being fought for. Some are important – some less so.

In the interests of self-disclosure, let me describe a bit of my own “brand”. This is where I am at. And to have any one of these emphases or convictions will mean someone will get upset. For example,

I could keep this list going all day. But hopefully you get my rift. No matter what I believe or favour, that will upset some people. Any strong conviction or theological leaning I may hold to will be certain to upset some folks. It just can’t be helped.

So we have to be prepared to be disliked, hated and opposed by many, simply for having any strong convictions, and for holding to any particular position. That goes with the territory. Learning how to show grace and forbearance to others in the midst of all this is crucial.

I have to tell folks all the time, this is who I am and this is what I believe. If you can accept that, fine, and if not, well perhaps go your own way. And I also have to tell them that just because I support some position or like some theological camp does not mean I necessarily buy into all that they believe.

Just because I quote from some theologian or Christian leader for example does not mean I necessarily agree with everything they might say. I may well disagree with various things they say or believe. Hey, I sometimes even disagree with myself! So unless we want to be a church with just one member, we have to learn to get along where possible, and be a bit more open to others.

So we all must learn how to be a bit more patient, gracious and forbearing with others when disagreements come up. Not everything is worth fighting about, and there are secondary doctrines on which we can agree to disagree. We need to all pray for discernment and wisdom as to which issues to fight to the death over, and which ones to lighten up on.

But to be a Christian means to stand up for truth – especially in the public arena. We must let our light shine in public. Thus controversy will be inevitable. Disagreements will arise. Conflict will happen. We need to pray for God’s favour, guidance, love, grace and truth as we enter into all these battles.

To wrap this up, let me mention the really ironic thing about all this: I actually hate conflict. I prefer to avoid it like the plague. I don’t like all the fights, all the controversies, all the wars, all the skirmishes. Yet this is what I have been called to do.

It is indeed ironic that God has called me into a ministry which results in daily conflict. So I desperately covet your prayers that I might show God’s love and grace, as well as have his wisdom, truth and boldness as I deal with my legion of daily critics, attackers, haters and enemies – many of whom are Christians! I think we all need those sorts of prayers.

As I have said elsewhere, people often discover me and befriend me and initially think I am just terrific. I have come to realise that I must offer them a gentle word of warning: hang around long enough and you will likely find something you won’t like about me. Hang around a bit longer and you will probably become convinced that I am a wretched heretic who needs to be burned at the stake. Happens quite often!

In closing, let me share this story which I have used elsewhere: