Once again, as is often the case in this series, this passage is not so much difficult and hard to understand, as it is so very frequently misused and abused. I hear this one all the time. It is thrown around constantly, and used in a manner in which it was never intended to be.

But is that what Paul means in this passage? Not at all. Once again, context is everything. This is one of the most elementary and important rules in biblical hermeneutics. And as has so often been said, when we pull a text out of its context, all we are left with is a con.

The context of these two verses is the whole of chapter 5. This is about one issue: a shocking case of incest which the Corinthian believers are not only tolerating but failing to deal with. Paul is staggered that this is being allowed to go on unchecked, and his response is clear: give the guy the boot!

As Ciampa and Rosner comment, “Paul’s judgment on the case of the incestuous man in the Corinthian church is simple and to the point: the man must be removed. The command to expel the sinner occurs no fewer than six times.” Thus this entire chapter is about one thing and one thing only: sin in the camp, and the urgent need to administer church discipline.

Now as I have written elsewhere, it seems that church discipline has all but disappeared in today’s church. But for Paul it was a matter of life and death, and 1 Cor. 5 is a major passage on the importance of church discipline. See here for more on this: billmuehlenberg.com/1998/02/23/in-search-of-church-discipline/ 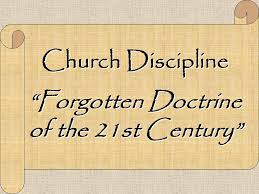 And of course the ultimate aim with this sinning Corinthian, as with all church discipline, is for his restoration. By expelling him from the Christian fellowship in Corinth, it was hoped that he would come to his senses, repent, and stop this gross sinning.

So this chapter has as its focus the need for the Corinthians to get off their butts and do something about this appalling sin – and do it quickly. That is how we are to understand verses 12-13. Such church discipline of course cannot take place for those who are not in the church.

It is that simple. And the idea of excommunication, or kicking someone out of the church, goes back to the Old Testament. Deuteronomy for example often uses the phrase, “purge this evil from your very midst” which Paul uses in v. 13 (eg., Deut. 17:7, 12; 19:19; 21:21, etc.). To exile a sinning Israelite outside of the camp was a very serious thing indeed.

That is not something we can threaten the non-Christian with obviously. They are already outside of the camp! Such actions would mean nothing to them. So that is all that these two verses are getting at. Therefore they have nothing to do with believers not being able to rebuke and judge non-believers and their evil behaviours.

We just cannot apply church discipline to them as we can to believers. As David Garland comments, “The context implies that ‘to judge’ (5:3) involves formally condemning someone and taking disciplinary action. It does not mean that the church should refrain from prophetic judgment of its society (cf. Rom. 1:18-32).”

Or as Gordon Fee comments:

The passage by no means intends that the church should not speak prophetically to the world, “judging” it for its injustices and unrighteousness. That is why God will eventually judge it, after all. The prophetic warning of God’s always imminent judgment must ever be a part of the church’s proclamation. This sentence has to do with not judging the world in the way they are to judge the incestuous man. In that sense the church has nothing to do with the world.

Anthony Thiselton puts it this way:

It is not for the church to try to impose its corporate house rules upon [those outside]. This does not imply that the church should keep silent about what God has ordained for the welfare of humanity. But it places its imposition of “rules of conduct” for the internal affairs of the church and the eternal affairs of the world on a different footing. Against the laissez-faire, consumerist culture of today, Paul asserts that to become part of the Christian community is explicitly to place oneself under the discipline of a Christian lifestyle.

Finney and others were right to speak out against the evils of the slave trade. Wilberforce was right to judge the pagan slave owners. Martin Luther King Jr was right to judge both Christian and non-Christian racists. We are all called to stand up for righteousness in the public arena. This passage is not at all saying that we should not.

The prophets did expect the pagans to live by Yahweh’s standards – they used the exact same language, made the same warnings, judged the same sins as they did with Israel. So there was no problem with upholding God’s righteous standards for the people of God as well as those who were not his people.

Moreover, just because a person is not a Christian does not mean that we cannot speak to them about righteousness, what is right and wrong, etc. A pagan is expected not to run a red light just as much as a Christian is. We expect non-believers to realise that murder is wrong, or theft, or lying, and so on. Being a non-Christian does not exempt people from right and wrong, and what is expected of them.

So once again, what this passage is most definitely not telling us is that we can never judge, rebuke or warn the non-Christian. It simply tells us that the process of church discipline which is so very vital in the church is obviously not applicable to those outside the church.