Today the founding Prime Minister of Singapore passed away at age 91. He is rightly credited with single-handedly turning Singapore from a third-world backwater to a first-world success story. One of the wealthiest nations in the world, the Singapore miracle was largely due to this great man.

Born in 1923, he studied at Cambridge and the London School of Economics. He returned to Singapore in 1949, convinced that self-government was the way forward for this island state. He soon formed the People’s Action Party (PAP) which won government in 1959.

For three years it was in federation with Malaysia, becoming an independent Republic on 9 August 1965. This is its Jubilee Year, and its success can be overwhelmingly attributed to Lee. The PAP has won every election for the past half century, but it is now being seriously challenged by other parties. 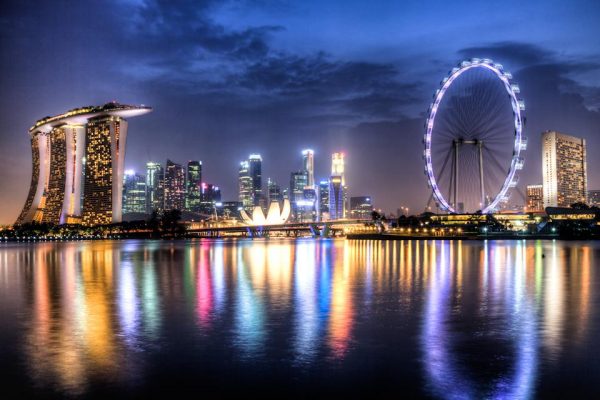 Part of the original Four Asian Tigers, it is certainly an economic miracle: a tiny cluster of islands with no real natural resources, it is today one of the great city states of the world. The 2013 Index of Economic Freedom ranked it as the second freest economy in the world following Hong Kong. As one commentator notes, Singapore has “Asia’s second largest concentration of millionaires (after Qatar).” He continues:

This city-state of a little more than 715 square kilometers is now one of the richest countries on the planet, in terms of per capita GDP, with an economy entirely incommensurate for its tiny size. And this ambitious growth trajectory was engineered under Lee’s close supervision. Bereft of any natural resources, a young prime minister pushed the island to develop key infrastructure, including a world-class port and an airport. Alongside these projects, Lee focused on housing and jobs—Singapore’s preceding British overlords had other concerns—and established the foundations for the Housing Development Board (HDB) and the Economic Development Board (EDB).
The HDB transformed this swampy island into a first-rate, first-world metropolis, and helped pull Singaporeans—of Chinese, Malays and Indian descent—out of their ethnic enclaves and into carefully planned mixed townships. The EDB, meanwhile, slowly built up Singapore’s mix of industries and businesses, dodging recessions and crises to assemble an economy that could support a population swiftly moving out of poverty. From a per capita GDP of about $500 in 1965, Lee’s administration raised it a staggering 2800% to $14,500 by 1991.

But since all these facts are rather well known, let me speak briefly to the religious scene. Lee himself was not a Christian, although he was prayed for by millions. In a 2009 interview he said this, when asked about evangelical Christianity in Singapore:

You see most Chinese here are Buddhists or Taoist ancestor worshippers, I’m one of them, so it is a tolerant society, it says whatever you want to believe in, you go ahead. And these youngsters, the educated ones, Western-educated especially, now they are all English-educated, their mother tongue is the second language. Therefore, they begin to read Western books and Western culture and so on and then the Internet. So they begin to question like in Korea that what is this mumbo-jumbo, the ancestors and so on? The dead have gone, they’re praying before this altar and asking for their blessings and then they have got groups, Christian groups who go out and evangelize. They catch them in their teens, in their late teens when they’re malleable and open to suggestions and then they become very fervent evangelists themselves. My granddaughter is one of them. She’s now 28. My wife used to tell her look, don’t go for any more of these titles, just look for MRS. It’s just around the corner, God will arrange it.

Singapore has experienced quite remarkable cultural and religious harmony. Around a third of Singaporeans are Buddhist, followed by around 20 per cent Christian. Muslims are around 15 per cent of the population. The Christian churches there are thriving – the largest being New Creation Church led by Joseph Prince.

Quite a few very active megachurches are there, along with plenty of smaller ones. I have been greatly impressed by the quality and caliber of the believers I have met there. But the nation is at a crossroads in various respects. As mentioned, this is its Jubilee Year.

The biblical significance of this is of course important. And with Lee now gone, and the PAP slowly losing its commanding position in Singaporean politics, there are questions being asked as to how Singapore will fare in the near future. The once very socially and culturally conservative landscape is now beginning to shift.

The usual moves for things like the homosexual agenda are slowly but surely gaining voice and traction in the country. Just last year in late October a Singapore Supreme Court ruling upheld the country’s ban on same-sex relations between consenting adult men as found in section 377A of Singapore’s penal code.

But the activists are chipping away at that, and elsewhere. Those Christians who are standing strong on this and speaking out are few. I have met many of them and they are brave warriors, but as with so many nations, much of the church is asleep.

Way back in 1978 in a crusade there, Billy Graham called Singapore the “Antioch of Asia”. It has such a strategic position, not just in terms of geographical location, but spiritually speaking as well. Which way will Asia go in the future religiously? How will the gospel fare there?

Much of this will be determined by the church in Singapore. Will it rise to the occasion and remain faithful to Christ? Will it seek the welfare of the city (Singapore) as it reaches out to its neighbours? This is a crucial time for Singaporean Christianity.

It has a huge legacy and inheritance which it dares not squander. So much of this legacy is due to a wise, strong, forward-looking leader like Lee. Whether he finally came to Christ on his death bed I do not know. But he was in many ways God’s man for Asia for the past half century.

God had raised him and Singapore up for his purposes. Now it is up to the Christians in this great nation to decide how they will proceed. May they not waste this remarkable opportunity and all the many blessings – material and spiritual – that they now enjoy.

We must all pause to reflect on this great leader, politician and statesman. He did so very much for Singapore, Asia and the world. But we must also pray for the church in Singapore. This is indeed a crucial period. Singapore is at a crossroads. May it become indeed the Antioch of Asia.