Much can be said – and has been said – about modern culture, pop culture, and the way in which we are raising the next generation. Modern Western education is really not doing much for our kids, and the rise of all things geared to catering to young people – from MTV to the high tech revolution – is simply making things worse sadly.

Having discussed this often elsewhere, I don’t intend to explore this at length. Indeed, this may be one of my shortest articles on record. This piece is merely an excuse to post a worrying pic I saw on the social media. When I first saw it posted a few days ago my spirit groaned a bit and my heart sank somewhat.

When I saw it posted again today, I shared it myself and wrote a brief comment about it. So just what is it that has got me writing yet another article? In a way it is simply representative of where our culture is at today, and where so many children in the West are at. 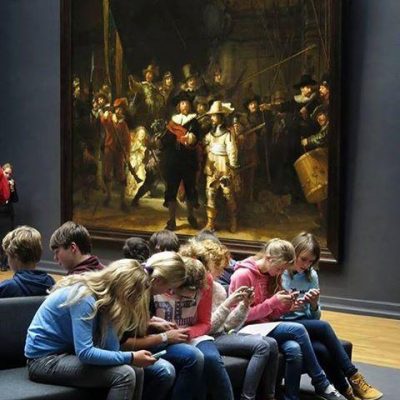 This is of course Rembrandt’s famous painting, “The Night Watch” which is housed at the Rijksmuseum in Amsterdam. This huge painting (12 by 14 feet) was painted in 1642, and originally titled, “The Company of captain Frans Banning Cocq and lieutenant Willem van Ruytenburch preparing to march out.”

Thankfully the much abbreviated title has stuck, and that is how we know it today. When I lived in Holland from 1979 to 1984, I often went there and stood in awe of such majestic works of art. And having just been back to Europe a year ago, and having seen this piece once again, the contrast between what I recall seeing and what these kids seem to be seeing is most glaring.

Indeed, I must say this is a telling pic in so many ways. The dumbing down of our kids, the cultural illiteracy, the trivialisation of life, the obsession with self, the fixation on technological gadgetry, and so on. Just what have we done to our children? It seems we have raised a generation of zombies who are utterly fixated on all their small handheld devices. That is the only world they seem to know about – or care about.

I just showed this pic to my wife and she tried to give the kids the benefit of the doubt: ‘Maybe they are using the free Wi-Fi there to learn more about the painting’. Well yes that is possible, and yes that is a charitable take on all this. But why do I suspect otherwise?

Why do I suspect that they are in fact texting their friends, chatting about the latest goss, and saying they can’t wait to get out of there and meet their buddies at McDonald’s? Well, perhaps my wife is right. I hope so. But I remember every time I was there, fighting the crowds to get a close look at the painting. I never saw it completely vacant of art lovers, with everyone glued to their mobile phones.

OK, maybe I am just sore. When we were there last year we had to wait in a long line outside in the cold driving rain before we finally made it in. I thought they should have done something about adding a bit of protection for all the folks dying to get into the place!

But as I say, this will be a brief article. This pic did disturb me. And perhaps I am overreacting. Or perhaps this is yet another indication of the decline and fall of Western civilisation. You be the judge.

23 Replies to “A Generation of Zombie Children”