One of the most famous and most often recited passages from the Old Testament is 2 Chronicles 7:14. Most Christians know it well and mention it often. It says: “If my people, who are called by my name, will humble themselves and pray and seek my face and turn from their wicked ways, then I will hear from heaven, and I will forgive their sin and will heal their land.”

Plenty of believers apply this passage to the situation they find themselves in today. This can be appropriate if done carefully, and done with the context in mind. And that general context is the issue of obedience. The more immediate context is the building of the temple by Solomon (see 2 Chr. 2-5), followed by his prayer of dedication (ch. 6).

Chapter 7 is about the actual dedication of the temple, and in verses 11-22 we hear the words of Yahweh to Solomon. The opening two verses are these: “I have heard your prayer and have chosen this place for myself as a temple for sacrifices. When I shut up the heavens so that there is no rain, or command locusts to devour the land or send a plague among my people…” 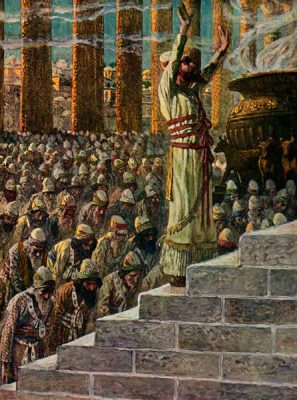 So what is this withholding of rain business all about? Solomon would have known exactly what it referred to, as would have all the Israelites. Back in the Pentateuch the covenant stipulations and conditions were clearly laid out, including blessings for obedience and curses for disobedience.

We read about them in Leviticus 26 and Deuteronomy 28. In Deut. 28:23-24 for example we find some of the curses for disobedience: “The sky over your head will be bronze, the ground beneath you iron. The Lord will turn the rain of your country into dust and powder; it will come down from the skies until you are destroyed.”

That has to do with holding back the rains, while v. 38 covers the locusts: “You will sow much seed in the field but you will harvest little, because locusts will devour it.” And vv. 21-22 deal with the various plagues. So all this comes straight out of the covenant blessing and curses to the nation of Israel.

The principle for Israel was quite simple: obedience will bring the blessing of God, especially in terms of the land (productive crops, large families, fertile herds, peace from neighbouring enemies, etc), while disobedience would see all sorts of problems, also especially to do with the land.

As Leslie Allen comments, “In Solomon’s prayer Israel’s land was featured as the area of deprivation and corresponding blessing (6:25, 27, 28, 31). The land functioned as a spiritual thermometer, registering the people’s degree of compliance.”

The Lord’s promise to Solomon, as Andrew Hill notes, “is conditioned by two separate but related factors. The first is the obedience of the people to the laws of God (7:13–16); the second is the obedience of the king to those same divine decrees and laws (7:17-18). Little has changed in the theological progression from the Mosaic covenant to the Davidic covenant – the blessing of God still requires the response of faith acted out in loving obedience to God’s revelation.”

Of course the idea of blessing for obedience and curses for disobedience is a universal principle, but it works a bit differently today. This is for at least two main reasons: one, no modern nation has a special covenant relationship with God as did ancient Israel; and two, for God’s people today (the church), our blessings are primarily in the heavenlies as Ephesians 1:3; 2:6, etc., spell out.

That is, we do not own a special piece of promised geography, as Israel did. Most of the blessings and curses for Israel were directly tied in with the land. But America or Australia are not part of the Promised Land agreement with God. I speak to this in much more detail here: billmuehlenberg.com/2015/01/03/misappropriating-old-testament-blessings-and-curses/

So how do we apply this passage to ourselves today? A general rule of thumb in biblical interpretation is to realise that a specific promise of God may have one direct reference (in this case, to Solomon and the Israelites), but many secondary applications.

So while this word was given specifically to Solomon and ancient Israel, we can certainly get a secondary application out of it. Instead of applying it directly to a modern secular nation, it would be best to apply this mainly to the church – to God’s own people.

Here the general truth of 2 Chr. 7:14 is still quite relevant: when we disobey, there will be consequences. It may not specifically entail having less healthy milk cows as back then, but it will be a real consequence nonetheless. For example, all the false teaching and false shepherds found in our churches today may be both sin and the consequence of sin.

Preaching a false gospel is sinful and will be punished by God, but in another sense it may well be part of God’s judgment on a compromised, carnal and complacent church. As Paul Washer once powerfully said:

False teachers are God’s judgment on people who don’t want God, but in the name of religion plan on getting everything their carnal heart desires. That’s why a Joel Osteen is raised up! Those people who sit under him are not victims of him, he is the JUDGMENT OF GOD UPON THEM BECAUSE THEY WANT EXACTLY WHAT HE WANTS AND IT’S NOT GOD!

I think Washer is exactly right. When we allow so much compromise and worldliness and apathy to run rampant in our churches, God does not just sit idly by. He will judge this. Again, it may not have to do so much with crops with mildew or blight, or poorly producing vineyards as it was back then, but it will be a real judgment.

So we must be a little bit careful here every time we find ourselves in a drought or some such thing. A lack of rain may be a sign of God’s judgment on us, but it may not. We must not forget about God’s common grace. Remember the words of Jesus in Matthew 5:45: “He causes his sun to rise on the evil and the good, and sends rain on the righteous and the unrighteous.”

The truth is, you can have an evil pagan living right next door to a godly Christian. Normally God does not cause a rain cloud to pour only on the good guy, while missing the bad guy. As the verse above suggests, we both will get it, whether we deserve it or not.

And of course the main emphasis of 2 Chr. 7:14 is repentance. That is the key. As Hill notes, “The activities of ‘humbling, praying, seeking, and turning’ should be understood as four facets or aspects of the act (or even process) of biblical repentance.”

Everyone it seems wants the blessings of God, but few are prepared to actually come to a place where they can receive them. Yahweh promised Solomon – and Israel – great blessing, but it was conditioned on obedience. And when disobedience arises, there can be only one solution: repentance.

That is what this verse is primarily all about. We all want a blessed and productive and God-pleasing America, or Australia, etc. But this can happen only under one condition: when God’s people (“my people, who are called by my name”) actually repent, and repent thoroughly and seriously. Are we prepared to do that?

In sum, there is nothing wrong with citing this verse or praying this verse. But remember the context: disobedience will bring the judgment of God. Today our blessings are more spiritual in nature, and so too the judgments. A batch of bad weather may or may not be part of the specific blessing or curse of God.

But for Christian churches and individual Christians to check their own hearts and see if known and un-repented of sin still lurks is always a good exercise indeed. There may well be various spiritual blockages or setbacks because of such disobedience.

So if we want to see the full blessing of God in our lives, we must make sure that we are dealing with any and all acts of disobedience. Simply praying this prayer in the hopes that our nation will be turned around, without dealing with the disobedience issue – either as individuals or the church – and engaging in heartfelt repentance, will be an exercise in futility.