One hundred years ago a horrific massacre of non-Muslim minorities was launched by Ottoman Turks. More specifically, on April 24 1915, the Ottoman authorities began their program of mass annihilation of the largely Christian Armenian, Assyrian and Greek populations.

It took place over several decades and witnessed the wholesale persecution, torture, rape and murder of at least one and a half million Armenians and others. Barnabas Fund, which works on behalf of the persecuted church, offers this overview:

In 1900 Christians constituted around 32% of Ottoman Turkey’s population. Just 27 years later the figure was down to about 1.8%. In early 1915, a fatwa was issued against non-Muslims in the Ottoman Empire. Muslims were called to fight the Christian minorities with whom they had been living as neighbours, albeit not on equal or necessarily peaceful terms. Many refused to take part, but those who did inflicted colossal suffering and destruction on the Armenian, Greek and Assyrian Christians.
It is thought that over 1.5 million Armenians, up to 750,000 Assyrians and up to 1.5 million Greeks – men, women and children – were killed in the state-sanctioned genocide over a 30-year period; yet their tragic loss is barely remembered today. The Armenians’ Golgotha and the Assyrians’ Seyfo (“sword”) is a forgotten genocide against forgotten peoples….
Though many Armenians fought for the Empire in the First World War, the government chose to systematically disarm and kill Armenian soldiers. Some were murdered in public squares or by using the Islamic method for slaughtering animals: tied-up, put on their backs and throats slit. On 24 April 1915 authorities arrested and later executed Armenian intellectuals and leaders.
Christians were freighted by train or forced to walk hundreds of miles without provisions to concentration camps in the Syrian Desert for “manual labour”. Only one quarter of all deportees survived the exposure, starvation, violent attacks and other abuses to reach their destinations, whereupon many were murdered in organised killings. Those who tried to protect Armenians often met the same end. Killing units in Deir al-Zor smashed children against rocks, mutilated adults with swords, and burned people alive. Some 200,000 Armenians converted to Islam in order to be spared. In 1915 alone, approximately 800,000 Armenians were killed. 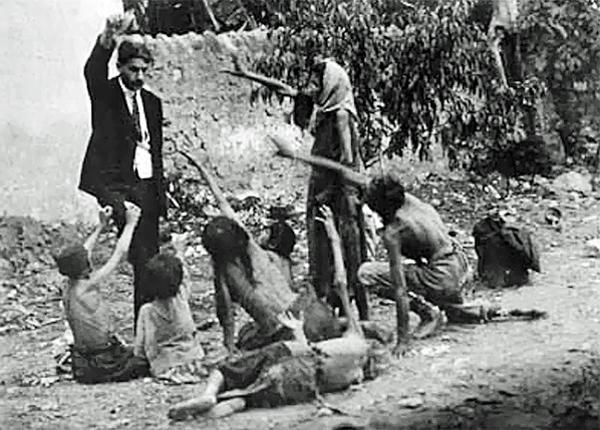 To make all this more real, more graphic, consider the accompanying photo of a Turkish official tormenting starving Armenian children by showing them a piece of bread during this genocide.

Let me offer two accounts from those who had forebears involved in all this hellishness. The first is Stella Morabito who is the granddaughter of genocide survivors. She writes:

And David Kupelian recounts the story of his grandparents:

It was 100 years ago, and my dad, just a toddler then, along with his mother and baby sister were among thousands of Armenian Christians being herded into the Syrian Der Zor desert east of Aleppo to die. That’s right, to die. Forced into such a miserable and dangerous trek, the plan was that exposure, hunger, thirst, bandits or marauding soldiers would get the job done, one way or the other. As for my father’s father, a physician, he had already been forced into the Turkish army against his will to head a medical regiment to tend to the Turkish soldiers’ injuries.
“One of my earliest recollections, I was not quite three years old at the time,” my dad told me shortly before he died in 1988, was that “the wagon we were in had tipped over, my hand was broken and bloody, and mother was looking for my infant sister who had rolled away. The next thing I remember after that, mother was on a horse, holding my baby sister, and had me sitting behind her, saying, ‘Hold on tight, or the Turks will get you!’”…
In 1909, my great-grandfather, a Protestant minister named Steelianos Leondiades, was traveling to the major Turkish city of Adana to attend a pastors’ conference. Today, Incirlik Air Base, used by the U.S. Air Force, is five miles east of Adana. But then, under the Ottoman caliph, Abdul-Hamid II, ethnic cleansing was the order of the day. Here’s how my maternal grandmother, Anna Paulson, daughter of Steelianos, told the story:
“Some of the Turkish officers came to the conference room and told all these ministers – there were 70 of them, ministers and laymen and a few wives: ‘If you embrace the Islamic religion you will all be saved. If you don’t, you will all be killed.’”
My great-grandfather, acting as a spokesman for the ministers’ group, asked the Turks for 15 minutes so they could make their decision, according to my grandmother’s account. During that time the ministers and their companions talked, read the Bible to each other, and prayed. In the end, none of them would renounce their Christian faith and convert to Islam.
“And then,” Anna recalled, “they were all killed. They were not even buried. They were all thrown down the ravine.”
The only reason we know any details of this particular massacre, she said, is that one victim survived the ordeal.
“One man woke up; he wasn’t dead,” my grandmother said. “He woke up and got up and said, ‘Brethren, brethren, is there anybody alive here? I’m alive, come on, let’s go out together.’”
Ultimately, by the grace of God, both sides of my family made it to the Promised Land – America – and eventually my father met and married my mother, and that’s how my brother, sister and I were blessed to come on the scene.

But plenty of leaders past and present – leaders like Obama – are seeking to whitewash all this. Morabito concludes her piece this way:

In the end, the Ottoman government really believed its problems could be solved only by brute force and the killing of innocents. Perhaps even more importantly, it happened because they expected to get away with it. This is key. If we corrupt the language so that we do not acknowledge genocide when it happens – as President Obama just did – then we feed into the expectations of all potential perpetrators that they can easily get away with murder. So we are liable to see genocide and other forms of mass slaughter repeated. No true civilization can afford to falsify the historical record or corrupt the language.
Inscribed on one of the walls of the United States Holocaust Memorial Museum is a stark lesson in this. It is a statement by Adolph Hitler, who rationalized mass slaughter and expected people simply to avert their eyes and forget: “Who, after all, today speaks of the annihilation of the Armenians?”

And Kupelian reminds us of the ongoing significance of all this:

Today we have ISIS, which Barack Obama infamously sized up as the “jayvee team” a few months before it blitzkrieged its way across large parts of the Middle East. ISIS is, in fact, now frequently compared to the Hitler machine of the early 1930s, maniacal and growing, but not yet a massive world power with fearsome weapons.
And just to bring things full circle, consider the primary role model for ISIS. No, it’s not Hitler, even though ISIS and Hitler share an infinite hatred for Jews. Rather, ISIS is emulating the world’s previous Sunni Islamic caliphate – namely, the Turkish Ottoman Empire, whose martyrdom of 1.5 million Armenian Christians is being remembered today.

This was a Holocaust we must never forget. Indeed, it is being repeated right before our very eyes with countless Christians being massacred by the political ideology known as Islam. When will we wake up? When will we respond? Or is this all another sad case of history repeating itself?

14 Replies to “Remembering the Armenians”