While some may not think so, God can use all sorts of things, even warfare, to carry out his purposes. As horrible as a war can be, God can be seen even there, and marvellous stories of his grace can be clearly found. Powerful Christian testimonies can be gleaned from times of war, and here is just one of them.

If you have an interest in things like the Second World War, you would be quite familiar with names like Jimmy Doolittle and books like 30 Seconds Over Tokyo. If you are not as cluey about the war, chances are good you saw the 2001 blockbuster film Pearl Harbor.

That film really focused on two main events: the attack on Pearl Harbor on December 7, 1941, and a payback mission over Japan conducted four months later. While the film version of events was a typical Hollywood depiction, there is a less well known Christian connection with all this. 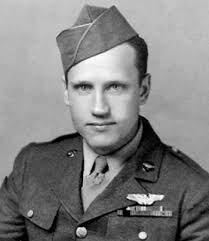 I refer to the life and work of Jacob ‘Jake’ DeShazar. It is his incredible story I wish to tell here, and I base it on a collection of such stories as found in Don Stephens’ War and Grace. I just picked up this volume a few days ago and have been impressed with the stories found in it.

Jake’s story is an inspiring story indeed. Born in 1912 in Oregon, he was raised by a devout Christian family, but soon rejected it all. He joined the US Army Air Force in 1940, and when the Japanese bombed Pearl Harbor, like many other Americans he developed a real hatred for the Japs, and sought revenge.

When he learned about a secret mission being led by Lieutenant Colonel James Doolittle, he volunteered for it. Only Doolittle knew what the mission was, but 16 five-man crews trained in modified B-25B Mitchell bombers. As the aircraft carrier USS Hornet was heading to Japan, it was spotted by the enemy, forcing the launch to take place earlier than planned.

It would be a one-way trip; flying to Japan, dropping bombs, then heading on to China, hopefully to find shelter in places not occupied by the Japanese. The 80 crew members knew this might be the last mission they would fly. So on April 18, 1942 the 16 bombers took off.

The payload was delivered, and the planes headed west. While not that much damage was inflicted on Japan, the morale boost for the Americans was huge. DeShazer parachuted into China and was captured by the Japanese. All up eight men were in the hands of the Japanese.

They were taken to a prison in Tokyo, where they were tortured and beaten and starved. Then they were transferred to a prison in Shanghai, China where conditions were even worse. Some of his colleagues were shot, or died from the malnutrition and injuries.

After a while, when the Japanese started to realise that the war might be lost, the remaining prisoners were treated a bit better, given a bit more food, and given books to read. The few books, looted from the home of a missionary in China, included a Bible.

This was to be the vital link in the salvation of DeShazer. As he devoured the Bible in May of 1944, he began to change. His hatred of the Japanese turned to pity. And on June 8 the words of Romans 10:9 led to his conversion: “If thou shalt confess with thy mouth the Lord Jesus, and shalt believe in thine heart that God hath raised him from the dead, thou shalt be saved.”

But he still had to live through a further year of imprisonment in Nanking. Then in June 1945 he and his three friends were transferred to Peking. On August 9 the Japanese government surrendered to the Allies. Before his release, he felt the clear call of God to be a Christian missionary to the Japanese people.

Finally on August 20 he was freed. He went back to Salem, Oregon. His mother had been praying for him for the last 40 months. After a period of recovery in hospital, he began his Bible college training, married, and in June 1948 they sailed for Japan.

He wrote a brief account of his story, and millions of copies of this leaflet were printed and distributed in Japan. The De Shazers spent thirty years ministering in Japan. As Stephens writes, “Everything DeShazer did in Japan had the unanimous support of the surviving raiders. They even backed him financially.” In March 2008 Jake died.

There are more amazing aspects to this story. Let me mention one major result of his conversion. One of the people to read the leaflet Jake had written was a former Japanese pilot, Mitsuo Fuchida. He was handed the pamphlet at a railway station in Tokyo in 1950, when he was 47 years old.

The leaflet influenced him greatly, and he bought a Bible. In April of that year Fuchida too became a follower of Jesus. Of interest, Stephens also has a chapter on his conversion. Why was he included? Fuchida had been the leader of the attack on Pearl Harbor a decade earlier!

Because DeShazer had been shot down, imprisoned, and so on, he became a Christian. And because of that experience, so too did Fuchida. Amazing grace. And his story is incredible as well. Soon after his conversion an ex-flyer sought to kill him.

Although he had a knife at his throat, Fuchida shared with him his testimony, and the man eventually left. Five years later Fuchida discovered the would-be assassin in a church he was preaching at: he had become an elder of that church!

Fuchida became an evangelist, preaching extensively in Japan and elsewhere. He even preached in Hawaii. He eventually met DeShazer in Japan: “It was a high point in the lives of both men when the Doolittle raider shook hands with the Pearl Harbor commander. Together they were the embodiment of how real faith in Christ changes lives and makes former enemies into the best of friends. They prayed together and were destined to do gospel work with each other.”

He died in May 1976. “DeShazer attended his funeral, and told everybody who asked that it was basically a joyous occasion, because his friend had gone to heaven.”

Amazing grace, even in war time.