Exactly 75 years ago today Dutch citizens woke to the sounds of airplanes overhead, gunfire, and Nazi paratroopers landing in Amsterdam. This was the beginning of five hellish years of Nazi occupation. And plenty of other European cities experienced the same thing back then.

And almost exactly 70 years ago, the Nazis were routed and Victory in Europe Day was celebrated. March 8, 1945 was a day of tremendous celebration and rejoicing. And all this serves as a perfect picture of the world we find ourselves in.

The Christian believes that we are living in enemy-occupied territory, and one day Christ will return and bring all the insurgency and rebellion to an end. In the meantime we are his foot soldiers, fighting on his behalf. And since the world hated Christ, it will always hate us.

Thus there has always been an ongoing war between God and his people, and those who hate God and his people. Yesterday I picked up two new books, both by Bryan Litfin. The first, After Acts (Moody, 2015) picks up the story where Acts 28 leaves off.

He fills in the details of what happened to the apostles, and for the most part it was not a pleasant ending, with martyrdom the lot of most of them. Separating fact from myth, he recounts how James was stoned to death in Jerusalem around 62AD; Peter was crucified (perhaps upside down) in Rome in 65, and Paul was put to the sword for the crime of treason in around 66. 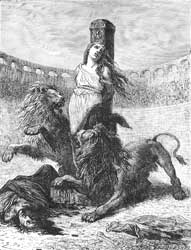 His other book, Early Christian Martyr Stories (Baker, 2014) tells of the horrific torture and death of countless Christians in the early days of the faith. It was not just brave Christian men who met this fate, but plenty of women and children as well. Blandina was just one such woman who underwent suffering that most of us will never experience. Consider this account:

Blandina was filled with such strength that the torturers, who worked in shifts from dawn to dusk tormenting Blandina with every possible method, were exhausted and finally gave up. They admitted they were beaten, that there was nothing left to do to her that hadn’t been done already. In fact they marvelled she was still alive with her entire body ripped open and broken in every place. The men acknowledged that even one form of torture should have released her soul, not to mention such terrible ones like the many they applied. But instead this blessed woman, like a well-trained athlete, kept growing stronger throughout her confession. Blandina was refreshed and experienced rest and relief from her agony by exclaiming, “I am a Christian! We don’t do anything wrong!”

Today we also have persecution taking place. Indeed, there have been more Christian martyrs in the past century than in the entire church age. In the West persecution is also on the rise, but obviously not as severe – so far.

In my book Strained Relations I document nearly 200 cases of Western believers losing their jobs, being fined, or even imprisoned for standing up for their Christian convictions. This is getting worse all the time, as a full-scale assault on Christianity is now occurring throughout the Western world.

I want to draw together both these situations (that of the early church and that of the contemporary West) by noting a few things Litfin said in his volume about the martyrs. Early on he explains that the persecution was mainly due to a “clash of worldviews”.

It was a clash of religious ideologies which was at the core of this persecution. The Romans were not secular but quite religious, and the real sticking point was “the cultural imperative to pay homage to the emperor’s divinity in the imperial cult. . . . Devotion to the emperor’s divine spirit soon became a central aspect of the broader state religion. This served as a very effective social adhesive.”

The early Christians saw themselves as a community of spiritually emancipated slaves, now serving the one true Lord. How could they serve the false lord of the imperial cult? Emperor worship and their newfound faith were diametrically opposed.

All this to say, it was the collision of two religious worldviews that ultimately led to persecution – though this had a legal element as well. The Roman governors considered themselves to be prosecuting Christians as criminal before the law. . . . Legal prosecution cannot be bracketed off from religious persecution. The law itself was religions. It was designed to advance a particular cult system. . . . The Christians’ repudiation of their culture’s values therefore constituted a real and present danger. The pagans referred to them as “atheists” – people with no connection to the gods. Such individuals were like cancer cells on the face of a steadfastly religious society. . . . The persecution of the early church made absolute legal sense – not because the Christians were proven to have committed specific crimes, but because the church’s intrinsic worldview aimed a sharp dagger at the throbbing religious heart of the Roman Empire.

No one who is even halfway awake today can fail to see the tremendous similarities between ancient Rome and the West today. Indeed, are things that much different today in the secular West when it comes to dealing with Christianity? What we find happening now seems to be a mirror image of what was happening back then.

Consider our modern secular state: It too has a new untouchable religion: secular humanism. It too sees as a grave threat anyone who will not bow to its religion. It too sees social cohesion and conformity as very important values, and it too sees the recalcitrant Christians as troublemakers, rebels and threats to the security of the state.

By refusing to worship at the altars of multiculturalism, moral relativism, political correctness, the homosexual agenda, and so on, biblical Christians are viewed as the enemy and must be treated accordingly. That is why we are seeing one case after another of state-based persecution and prosecution of Christians in the West.

And if the current Supreme Court case on homosexual marriage turns out as expected, then this may well be the straw that breaks the camel’s back, with devout Christians being forced into wholesale rebellion against the evil dictates of the state, with civil disobedience the only viable option.

Just as wholesale persecution back then quickly weeded out the wheat from the chaff, so too we are seeing the same thing today. Those who are real followers of Jesus Christ, those who still hold to the authority of Scripture are quickly distinguishing themselves from all the nominal believers, all the apostates, and all the false shepherds who are siding with the world on one issue after another.

A real sifting is now taking place, and as state-sponsored persecution of Christianity continues to worsen, this will separate the men from the boys; the true disciples of Christ from all the fakes. So in that sense this persecution is a good thing. It is a good thing to weed out the wolves amongst us.

As things grow increasingly dark in the West, and as anti-Christian bigotry and persecution escalates, what we need above all else are brave and faithful men and women who will not give in an inch. We need champions in the faith who will exclaim to their tormenters and haters, “I am a Christian! We don’t do anything wrong!”

13 Replies to “Christian Persecution and the War of Worldviews”