Whether clueless, wilfully ignorant or deceived, or simply wolves in sheep’s clothing, I continue to be amazed by the number of people who claim to be Christians yet simply parrot all the usual discredited arguments for abortion. It bothers me greatly that those claiming to be followers of Jesus can get it so very wrong on something so important as the sanctity of human life.

I am constantly debating these folks, and find their ignorance or inability to think morally and logically to be quite shocking. All they have done is picked up what the world has to say about abortion, and think they are somehow being good Christians. 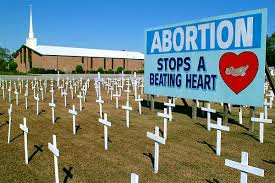 Let me here offer a few of the things these worldly believers have tossed my way as we have had these discussions. They are representative of the shoddy thinking and the complete lack of a biblical worldview that so many of these folks have.

‘Abortion is up to the individual and what they see is the right thing to do.’

Um, no. The intentional murder of another innocent person is never up to an individual. Just because someone thinks a course of action is right does not mean it is right. The Nazis thought that what they were doing was the right thing to do.

There must be a higher moral standard that we appeal to when it comes to fundamental matters of right and wrong. Indeed, that was just the argument used against war criminals at the Nuremberg trials. The prosecutors told those trying to hide under the “I was just following orders” excuse that there is a higher law which we are accountable to.

See more on this here: billmuehlenberg.com/2009/10/12/abortion-and-the-nazi-doctors/

And no one claiming to be a follower of Jesus can support the slaughter of unborn babies. Have these folks never heard of the sixth commandment? Murder is prohibited – the killing of the unborn is just that. One might as well foolishly say rape is up to the individual, or theft.

‘It is not the job of Christians, prolife activists or anyone else to tell any person they are doing wrong.’

Baloney. We of course have a biblical obligation to point out evil and resist it. We are called to stand for that which is good and oppose that which is evil. But by this goofy and convoluted thinking, Wilberforce was wrong to stand up for Blacks and challenge the slave owners.

By this unbiblical thinking, people like Martin Luther King Jr. were wrong to publicly oppose racism. By this dumb thinking the early Christian missionaries in India were wrong to speak out against the common practice of suttee: burning widows alive in their husband’s funeral pyre.

We must always speak against that which is evil. As R.C. Sproul once said, “It is time for churches that see the evil of abortion to stand up and be counted – no matter the risk or the cost. When the church is silent in the midst of a holocaust, she ceases to be a real church. Wherever human dignity is under attack, it is the duty of the church and of the Christian to rise up in protest against it.”

‘The Bible does not say anything about abortion.’

This is equally silly. Throughout Scripture the sanctity of human life is held up, and warnings against the taking of innocent life are repeatedly heard. We have commands to stand up for those being led to the slaughter, and we have warnings about those who would not protect the innocent.

But more detail on this is found here: billmuehlenberg.com/2015/01/05/the-bible-and-abortion-challenging-the-revisionists/

‘Christians shouldn’t force their views on others.’

Just who is forcing anyone to do anything here? How does speaking up for the unborn mean we are forcing people to do something? How does affirming the biblical truths about the sanctity of human life have anything to do with law, force and coercion?

It is the state which has the power of coercion. Christians and non-Christian prolifers have just as much right as anyone else in a democracy to voice their opinions in the public arena. Of course we seek to influence the decisions of our law makers. That is called being a responsible citizen. The pro-aborts are always doing this. Why can’t we?

And how does telling a person that there is biblical hope in this area have anything to do with force? How have I and any prolifer forced anyone in any way in this regard? A person praying outside an abortion mill is not forcing anyone to do anything.

‘We can’t force a woman who was raped to have the child.’

But what does rape have to do with anything? Not only is pregnancy due to rape exceedingly rare, but how does that excuse the murder of the unborn child? And given we are talking about a miniscule amount of cases here, what does that have to do with the biblical preference for the sanctity of life, or with the role of the law?

Hard cases make for bad law, and should never be used to formulate legislation. But I speak to all that in greater detail here, so have a look: billmuehlenberg.com/2008/08/19/abortion-and-hard-cases/

And why not consider listening to what those who were conceived in rape have to say about this, instead of rehashing the usual pro-abort red herrings?
www.rebeccakiessling.com/Othersconceivedinrape.html

It grieves me when Christians seem steeped in all the pro-abortion nonsense, yet seem oblivious to the clear teachings of Scripture. We must do much better in biblical and ethical thinking. Jesus would never push abortion for any reason. How anyone can distort Jesus and the Bible into such absurd positions is beyond me.

Sadly it seems some people calling themselves Christians are far more influenced by the world than the Word of God on this topic. No wonder we are in such a bad way when people claiming to be Christians end up doing the work of those opposed to biblical Christianity.

Christians of all people should be leading the charge for the sanctity of life, and defending the defenceless. We do not need so-called believers shrilling for the baby killers. We need many more believers standing with the unborn. As Sproul said on the abortion holocaust: “I pray God for a multitude of Wilberforces who will relentlessly speak against this monstrous evil, until such a day that our nation will wake up.”

And as Richard John Neuhaus once put it:

Whether, in this great contest between the culture of life and the culture of death, we were recruited many years ago or whether we were recruited only yesterday, we have been recruited for the duration. We go from this convention refreshed in our resolve to fight the good fight. We go from this convention trusting in the words of the prophet Isaiah that “they who wait upon the Lord will renew their strength, they will mount up with wings like eagles, they will run and not be weary, they will walk and not be faint.”

22 Replies to “Clueless Christians and Abortion”