I am not sure what other folks do while on a bit of a vacation, but my mind is always going over how the situation I find myself in fits in with the biblical worldview. So although I am now in the US for a brief break, that has not stopped me from reflecting on the various battles we are in. Even in a refurbished hotel this takes place.

Many might recall the great ocean liner, the Queen Mary. It was first launched in May 1936 and primarily sailed on the North Atlantic Ocean until 1967. Since then it has been retired and permanently moored at Long Beach, California, and is now a floating hotel and tourist attraction. 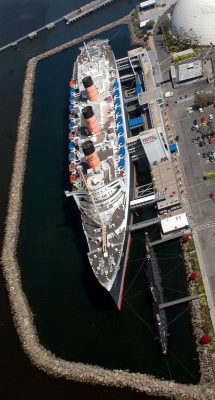 I never sailed on it – hey, I am not rich – but I am now writing this from its decks. The prices for staying here are now not incompatible from many other hotels in the LA area, so we are here for a few days. The great ship has had an intriguing history, especially during wartime.

From March 1940 to September 1946 it was taken over for use in the war effort. It became a troop carrier and made quite a number of runs. One write-up describes this period:

Queen Mary left New York for Sydney, Australia, where she, along with several other liners, was converted into a troopship to carry Australian and New Zealand soldiers to the United Kingdom. In the WWII conversion, the ship’s hull, superstructure and funnels were painted navy grey. As a result of her new colour, and in combination with her great speed, she became known as the “Grey Ghost.” To protect against magnetic mines, a degaussing coil was fitted around the outside of the hull. Inside, stateroom furniture and decoration were removed and replaced with triple-tiered wooden bunks (which were later replaced by standee bunks). Six miles of carpet, 220 cases of china, crystal and silver service, tapestries and paintings were removed and stored in warehouses for the duration of the war. The woodwork in the staterooms, the cabin-class dining room and other public areas was covered with leather. Queen Mary and Queen Elizabeth were the largest and fastest troopships involved in the war, often carrying as many as 15,000 men in a single voyage, and often traveling out of convoy and without escort. Their high speed made it difficult for U boats to catch them.

It played an important role during the Second World War. As but one highlight: “In December 1942, Queen Mary carried 16,082 American soldiers from New York to Great Britain, a standing record for the most passengers ever transported on one vessel.” Winston Churchill made use of it, and sang its praises:

On August 30, 1939, the Queen Mary departed on her last peacetime voyage. The following day the Nazis invaded Poland and for safety reasons the Queen Mary was ordered to run a zigzag course under blackout conditions. Comedian Bob Hope was one of the celebrities onboard during this final voyage before the start of WWII….
Winston Churchill traveled on the Queen Mary three times during WWII and considered it his headquarters at sea. In fact, he even signed the D-Day Declaration onboard. Winston Churchill said, “Built for the arts of peace and to link the old world with the new, the Queens challenged the fury of Hitlerism in the battle of the Atlantic. Without their aid, the day of final victory must unquestionably have been postponed.”

Even very early on it played a key role as a refugee ship. German Jews for example were saved from the Nazis by the Queen Mary:

German Jews seeking to flee Hitler’s genocidal policies were banned from using Lloyd’s, the main German shipping line. The British Jewish community appealed to the Canard White Line to assist the Jews by accepting them as passengers. The company was in the middle of building an Art Deco ocean liner called the Queen Mary and agreed to include a synagogue—regarded by many Jews as an act of defiance against Nazism. Thousands of Jews worshipped in the ship’s temple from 1936-1939, as did hundreds of Jewish soldiers once the ship was converted to a troop carrier.

Another piece discusses the war-time role of the Queen Mary:

Eventually, the ship’s troop-carrying capacity was increased to 16,000 men. She could move an entire army division in one voyage. This was an incredible feat, duplicated by the Mary’s sister ship the Queen Elizabeth, which had also been adapted for troop-carrying. It was not comfortable. Soldiers on board took turns in the bunks, sleeping in shifts as there were not enough bunks for all the men.
The Queen Mary was intended for the North Atlantic weather, and it transpired that she did not have adequate ventilation for the tropical climates she sailed through. Many men died from heat-exhaustion. Nevertheless, Churchill (who was occasionally a passenger during the war under the pseudonym “Colonel Warden”) later said that the two “Queens” had shortened the war by a year. It was not surprising that Germany tried to destroy the ships, and it was rumored that Hitler offered the Iron Cross and a huge sum of money (some said $250,000 USD) to any U-Boat captain who could sink either of the Queens.
The Queen Mary’s greatest defense against torpedoes was her speed. Sailing at 28.5 knots, the Mary was a fast moving target, much faster even than a warship could manage, and very difficult to aim at. To make it even more difficult, she zig-zagged at regular intervals, following set patterns….
After the war ended, the Queen Mary not only served to take American and Canadian G.I.s home, but also the wives they had met and married in Britain. The Queen Mary carried about 10,000 of these brides (about a third of the total), along with 3,700 children. At this time, the bunk beds had been removed from the ship, and later in September 1946 she began a ten month refit during which she was returned to her pre-war condition and color. Radar was also fitted to her at this time. She resumed her normal transatlantic service on 25th July, 1947.

A complete listing of all the wartime ocean crossings can be found here: ww2troopships.com/ships/q/queenmary/cruiserecord1940.htm

It is moving to be here and to imagine what life was like back then, whether for the fleeing Jews, the soldiers being carried back and forth from battle, leaders like Churchill, or the crew of the Queen Mary. So much history from not all that long ago, yet most people today would have no inkling of that recent history.

So many people gave their lives back then so that we might enjoy our freedom. So many sacrifices and so many pauses from ordinary life had to take place so that enemies could be fought and our liberties secured. In times of crisis it cannot be business as usual.

Normal activities must be put on hold and a different lifestyle must be engaged in. That was certainly true for so many millions of people during WWII and it was true for the Queen Mary. Normal life had to give way to a more austere and sacrificial way of living.

In the Christian life things are really no different. While everyone else may be living a carefree and easy life, it is not so for the believer. We realise that a war is going on, and things cannot go on as usual. We must live in a different sort of way.

Leonard Ravenhill may not have had the Queen Mary in mind when he said this, but it serves as a fitting conclusion: “The Church used to be a lifeboat rescuing the perishing. Now she is a cruise ship recruiting the promising.”

3 Replies to “Wartime, the Queen Mary, and the Christian Life”