There is no question that contemporary education in the West is in a bad way. The crisis in our classrooms, especially at the university level, is simply indicative of the moral crisis in the West. Moral relativism, political correctness, and the hegemony of secular left ideology is destroying our educational system. 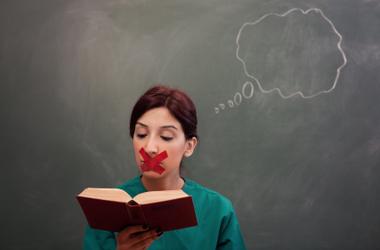 Examples of this abound. Two recent cases in Australia demonstrate this rather clearly. Consider this appalling case out of Sydney:

Women were segregated and asked to sit at the back of a lecture by the radical group Hizb ut-Tahrir at a Muslim students group at the University of Western Sydney last night. At the event in Parramatta, men and women were asked to sit apart. The Daily Telegraph attended the talk — and this reporter sat with the women before being politely told “brothers to the front” and “sisters” to the back. The women were ushered through a door marked “sisters” at the rear of the hall, while the “brothers” entered through another door and were told to take their place in “the front five rows”.

What?! Is this not gross sexism and massive misogyny? Evidently not for the UWS. It said: “UWS is a university located within the multicultural heart of Sydney. Our university reflects the diversity of our community.” Oh really? Just imagine if a Christian group rented a classroom there, and sought to keep women at the back of the bus.

Not only would the university never allow it, but the mainstream media would be having a field day with this. But because this was a group of devout Muslims doing what Islam does best, we hear crickets chirping. And this is what passes for sexual equality in our universities today.

On the other end of the country we had this case of crass political correctness and enforced conformity:

The University of Western Australia has cancelled the contract for a policy centre that was to be headed up by controversial academic Bjorn Lomborg after a “passionate emotional reaction” to the plan. The Federal Government had pledged to contribute $4 million to the Consensus Centre, a think tank that was to use methods similar to those used by Dr Lomberg’s Copenhagen Centre.
Dr Lomborg has attracted controversy for suggesting that the dangers of climate change are overstated, and that society faces other more pressing challenges such as global poverty. In a statement, UWA Vice Chancellor Paul Johnson said the creation of the centre had attracted “mixed reactions” from staff, students and the general public.
“The scale of the strong and passionate emotional reaction was one that the university did not predict,” he said. “Over the past few weeks, I have met and talked to staff, students and members of the public to hear their views, and to explain how the centre will operate within the university, the type of economic analysis it will undertake, and to correct many mistruths and misunderstandings about the centre.
“I have stated many times that it is not a centre to study climate change, that the university was not providing any direct funding to the centre, and that that Bjorn Lomborg would not be involved in its day-to-day operations.” But he said the strong opposition to the centre had placed the university in a difficult position, and that the lack of support meant it could not deliver “value for money for Australian taxpayers”.

Um, right. So much for academic freedom, a free flow of ideas, and an open mind. Not everyone was happy with the result. A piece in the AFR said in part: “The University of Western Australia’s embarrassing retreat from its decision to host Bjorn Lomborg’s Australian Consensus Centre is a stunning blow to academic freedom in Australia, but with the academics themselves to blame for the assault.”

But all this is par for the course on most university campuses in the West today. A decade ago Thomas Sowell wrote about “academic freedom and classroom brainwashing”. Part of what he wrote is worth offering here:

All across the country, from the elementary schools to the universities, students report being propagandized. That the propaganda is almost invariably from the political left is secondary. The fact that it is political propaganda instead of the subject matter of the class is what is crucial.
The lopsided imbalance among college professors in their political parties is a symptom of the problem, rather than the fundamental problem itself. If physicists taught physics and economists taught economics, what they did on their own time politically would be no more relevant than whether they go swimming or sky diving on their days off. But politics is intruded, not only into the classroom, but into hiring decisions as well.
Even top scholars who are conservatives are unlikely to be hired by many colleges and universities. Similarly with people training to become public school teachers. Some in schools of education have said that, to be qualified, you have to see teaching as a means of social change — meaning change in a leftward direction.
Such attitudes lead to lopsided politics among professors. At Stanford University, for example, the faculty includes 275 registered Democrats and 36 registered Republicans. Such ratios are not uncommon at other universities — despite all the rhetoric about “diversity.” Only physical diversity seems to matter.
Inbred ideological narrowness shows up, not only in hiring and teaching, but also in restrictive campus speech codes for students, created by the very academics who complain loudly when their own “free speech” is challenged. So long as voters, taxpayers, university trustees, and parents tolerate all this, so long it will continue.

Yes exactly so. A great way for the radical social engineers to take control of a nation is to smash academic freedom and replace it with ideological propaganda. That pretty well sums up the situation in the West today.

16 Replies to “The Death of Western Universities”