I know I should no longer be surprised about these sorts of things happening, but it still leaves my head and spirit reeling: I will write about something so utterly clear in Scripture that no biblical Christian could differ, yet that happens anyway.

I will get bus-loads’ full of so-called Christian pastors, leaders and others absolutely foaming at the mouth at me and what I write. Instead of agreeing with God about clearly defined sin, they will blast me for daring to affirm biblical truth and morality. 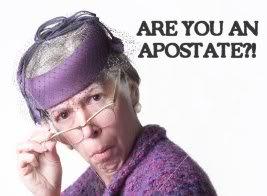 They have imbibed of the world and its values for so long that they actually think they are doing God a favour when they effectively promote sin and unrighteousness, and attack those who dare to sound the alarm. Indeed I have now become convinced of this truth (paraphrased from something Dennis Prager recently said):

When you cease to resist evil, you will start to hate those who do.

We of course get this from the world all the time. But the really shocking and frightening thing is when people calling themselves Christians do this. I have had heaps of hate and abuse from “Christians” over the past two days because I have dared to challenge a “Christian” icon and a trendy social cause.

I committed the PC crime of daring to question the Christian credentials of Bono and U2 as they pushed the diabolical line that there is nothing wrong with sodomite marriage, but in fact is a good thing, and Jesus would fully support it, because it is all about “lurve baby”. That piece appeared here: billmuehlenberg.com/2015/05/23/fake-christians-fake-marriage/

But the number of people in Christian leadership who have attacked me on this, and who have defended Bono and U2 and homosexual marriage has just boggled my mind, grieved my spirit, rattled my soul, and reminded me once again how utterly apostate, compromised and carnal so much of the church has become.

When you have Christian leaders defending sin and attacking those who speak against it, then you know that we are in a very bad way. And of course I have lost count over the past few days of the number of times ‘Christians’ have accused me of every evil in the world, all the while telling me how sinful it is for believers to judge someone!

I could fill a small library with books featuring examples of this from over the years. They will absolutely lay into me, calling me every name in the book, as they tell me how unChristlike it is to judge people! When people reject God’s absolutes and make up their own morality, it seems that their minds start to turn to mush as well.

I suppose what is even more tragic is these Christians have simply bought the entire agenda of the homosexual activists. They have completely rejected what the word of God so clearly teaches on this, and they simply parrot the wisdom of the surrounding secular left culture.

And they think they are being good Christians! This is so sad, so tragic. They regurgitate everything the militants say: “This is all about love”. “Love and commitment are what matters.” “Who are you to judge?” “There is no slippery slope here.” “Christians cannot impose their morality on others.” “Jesus just wants us to love, and not judge anybody.”

I expect these inane and vacuous bumper sticker cliches to be thrown at me by the homosexualists, but when we get “Christian” leaders pushing this, then we know we have lost big time. They are utterly clueless. They simply have no idea. They are completely in the fog as to the war we are in.

I have spent thirty years writing three books on this. I know full well what the homosexual activists have in mind. And it sure ain’t pretty. Their final goal is to totally silence the churches – the true churches that is. They have no problems at all with the lukewarm and compromised churches – indeed, they love them, and are fully using them to achieve all their goals.

So they love these clueless wonders who are doing their work for them, but they hate the true Christians and the true churches who are still committed to the absolute word of God, and will not capitulate and cave in to the agenda of the world.

When the secularists and the homosexual activists have achieved full hegemony in the West, real churches will be forced to close or go underground, while the sin-affirming ones will continue to do business as usual. In my latest book I documented nearly 200 cases of Christians losing their jobs, being fined, or even jailed for daring to affirm biblical truth and uphold heterosexual marriage.

That is just the tip of the iceberg. Every day we find more examples of this. Whenever special rights for homosexuals are granted, especially sodomite marriage, then the rights of everyone else are at risk. And it is overwhelmingly biblical Christians who are feeling the wrath of the homosexual/state axis of evil.

Yet these clueless Christians are utterly lost in space about all this, or – and this is my real worry – they do know this is going on, but they actually think it is a good thing. Yes, these so-called progressive Christian leaders actually think biblical Christians are the problem here, while the various activists groups are the good guys.

They think the real obstacle to progress and to the flowering of Christian “love” are those Christians who still adhere to biblical truth. ‘If we can just get them out of the way, then we can all proceed into an earthly promised land.’ Just as we had apostate Christian leaders and rock stars pushing sodomite marriage in Ireland, all over the West they are doing the work of the activists.

The activists just sit back and laugh, overjoyed at how easily their agenda is being realised, thanks to all these Christian ‘useful idiots,’ to borrow Lenin’s phrase. Indeed, those who have actually read the plans of the homosexual militants know just how much they have counted on the co-opting of the churches to achieve all their aims.

Just as they strategised, it is all going nicely according to plan. And these totally unaware leaders are being used as dupes and suckers – and sadly, some are being used in full awareness and compliance. They are the real problem: willing accomplices of this anti-God agenda.

As I have said before, one very good thing about all this is the fact that the sheep are being clearly separated from the goats. Things are becoming much more clear and precise here. There are those Christians who will never abandon Christ and his word, while there will be those who simply go with the flow, follow the world, and cheer on sin and abuse those who don’t.

The apostate church is becoming more and more well-defined. When a Christian stands for biblical truth, and gets hated on by other “Christian” leaders, then you know the sifting process has begun in earnest. The only thing remaining is for the true disciples of Christ to stand firm.

Even if they become a tiny minority, they must resist not only the world, but the apostate church, and remain true to God and his word. And the whole area of sexuality is one of these key battlefields. As J. Lee Grady said in a recent book, “The truth is that this current generation of church leadership has rendered itself powerless when facing the Goliath of sexual compromise.”

But now is not the time to compromise, whether it is on marriage, or homosexuality, or whatever. As A. W. Tozer said: “We who preach the gospel must not think of ourselves as public relations agents sent to establish good will between Christ and the world. We must not imagine ourselves commissioned to make Christ acceptable to big business, the press, the world of sports or modern education. We are not diplomats but prophets, and our message is not a compromise but an ultimatum.”

A. B. Simpson had it right when he said: “The chief danger of the Church today is that it is trying to get on the same side as the world, instead of turning the world upside down. Our Master expects us to accomplish results, even if they bring opposition and conflict. Anything is better than compromise, apathy, and paralysis. God give to us an intense cry for the old-time power of the Gospel and the Holy Ghost!”