The Christian faith is regularly abused and misused, as are key Christian terms and concepts. And sadly this is not just being done by non-Christians, but by believers as well. We have managed to mangle and manhandle basic Christian truth and doctrines time and time again. 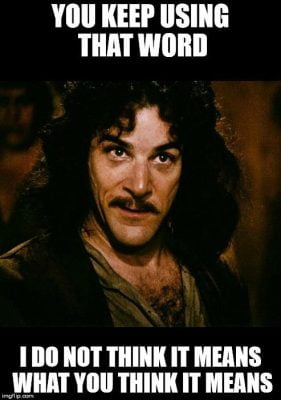 So let me offer five key terms and words of the Christian faith which are being abused every day. Sure, there would be other such terms we could add to the list, but certainly these five would be leading contenders on any thinking Christian’s list.

Jesus. It goes without saying that Christianity is Christ, so if you want to abuse and misuse the faith, then you begin with the person. Jesus has got to be the most misrepresented and most misunderstood person around. And of course behind all these faulty portraits of Jesus is Satan himself, who desperately does not want anyone to know the real Jesus.

So he gets atheists, secular humanists, leftists, religionists, New Agers, and uninformed Christians to present a plethora of images of Jesus – none of them representing the real Jesus of Scripture. Thus we have the hippy Jesus, the socialist Jesus, the greenie Jesus, the New Age Jesus, the syrupy sentimental Jesus, and so on.

Anything but the real Jesus. Anything but the creator and judge of the world who is fully God and fully man, the second person of the Trinity, and the one who has dealt with the sin issue so that we might get right with God the Father.

Instead, create a fake Jesus and offer him around to the masses, and you have basically destroyed biblical Christianity. That is why we see this all the time. Satan does not want us to know the real Jesus so he has become expert at creating millions of counterfeit and fraudulent Jesuses.

And far too many Christians have done exactly the same. We have a Jesus who is all about love, who would never harm a fly, and would never speak ill of anyone or anything. The Jesus of the book of Revelation is entirely absent, as is much of the Jesus of the gospels, including the table-throwing Jesus.

Love. Speaking of love, this is another biblical word absolutely gutted of its scriptural content, and filled with every sort of dopey and humanistic foolishness imaginable. Love is now almost entirely viewed as emotion, as feelings, as mushy sentiment.

But biblical love is always about willing the highest good for the other person. True love wants the best for the other person. And that best is of course God’s best. Thus if you really love a person, you will want them to have all that God wants for them: a relationship with himself, sins forgiven, bondages broken, lives transformed, etc.

And the opposite of love is not hate, but indifference. If you genuinely love someone, you care deeply about them and are concerned about their welfare – spiritual and otherwise. Indifference and apathy are the opposites to love. But real love involves hate.

To love your wife means hating that which would cause her harm, or puts her in danger. Thus human love, like divine love, is a jealous love, rightly understood. Such love cares enough about the individual to strongly oppose that which would harm that person. It certainly is not about tolerating everything and putting up with anything.

Judge. This of course is one of the most abused words of our time. In fact, Matthew 7:1 is perhaps the most abused verse in the entire Bible. The idea that Christians should never judge is as unbiblical as you can get. Everywhere Scripture commands us to judge, to discern, to assess, and to make moral pronouncements and judgments.

Not to do so is a sign of disobedience and rebellion. All that Jesus warned about in the Matt. 7 passage was hypocritical judging: attacking someone else when you are doing the same thing. That of course is wrong, but biblical judging is never wrong.

You cannot live the Christian life if you do not judge. Paul even tells us that one day we will judge the angels, so we had better get to it now in this life. But the worldly notions of tolerance and acceptance have so seeped into the churches today that we actually think we must not judge.

That is a recipe for disaster, and that is why the Christian faith in the West is so anaemic and sickly. We refuse to judge sin in the camp, false doctrine, false prophets, and so on. Instead we just put up with all this. That is a sure-fire way to shipwreck our faith and destroy the church.

Go to any church service today and you will be hard-pressed to hear much about sin, and the corollary doctrines such as the holiness of God, the wrath of God, judgment to come, hell, the cross, and repentance. All these key biblical truths are being heard less and less in too many churches today.

We no longer take sin seriously today because we no longer take God seriously. Instead of a holy and righteous God who hates sin and detests iniquity, we have a namby-pamby God who is simply a celestial butler here to do our every bidding.

We hang on to a faulty understanding of divine love while we jettison all the other key components and attributes of God. So of course sin gets downplayed and ignored in such a situation. And then sin becomes simply whatever the world says it is: eg, being intolerant, judgemental, non-inclusive, etc.

Heresy. This may seem like a surprise inclusion to my list, but I hear this term thrown around every day, and mostly it is being grossly misused and abused. The sad truth is, far too many believers will call someone a heretic or label their beliefs heresy simply if they happen to differ from their own points of view.

I am a heretic if I deny the historic core beliefs of biblical Christianity, such as the deity of Christ, the Trinity, and so on. If one denies the content of the great historic creeds, such as the Apostles’ Creed or the Nicene Creed, then yes, we can start talking heresy. But please spare me when you attack another believer as a heretic for simply having a differing view on some secondary matters of the faith.

One can easily come up with another five such terms, even another 25. So more articles may be forthcoming on this theme. But these five will do for a start. Let us resolve to not be guilty of such abuse and misuse of core biblical terms.