Whenever you hear lefties talk about the need for open and honest debate, you can usually count on them to mean that only their point of view should be heard. It is all one-way traffic with these folks: they want to fill the airwaves and monopolise the media, and ban any dissenting viewpoints.

That is the left’s definition of free debate. And it happens all the time. The left is not interested in what the other side says or believes. What it wants is complete domination of the public arena, where differing views are squashed and censored. 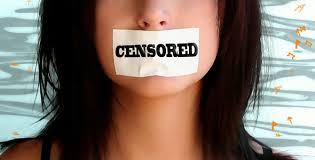 This tells us all we need to know about the paucity of their arguments and the shallowness of their positions. If they are not able to allow genuine free exchange of ideas, then you know their ideology is bankrupt. But that is always how they operate: stifle dissent and shout down opposing opinions.

Consider just one brief example I came upon moments ago:

Stating an anti-transgender opinion is close to forbidden in today’s “news” pages and “news” rooms, especially after the Bruce Jenner fawning frenzy. Exhibit A? Pittsburgh Post-Gazette columnist and associate editor Jennifer Graham wrote a column truthfully titled “Caitlyn Jenner is still a mister.” JimRomenesko.com notes Jay Brown of the so-called Human Rights Campaign demanded in a letter that she be fired for “hate speech, plain and simple”.

Yep, fire anybody who dares to take a non-PC and non-sodomite line on things. Forget about freedom of speech. Forget about differences of opinion. ‘You will believe my way or it’s the highway.’ Pure leftism in action – intellectual Stalinism in other words.

And this certainly happens all the time in the abortion debate as well. Just yesterday another classic example of this took place. Consider how a prolife group was treated when the leftist jackboots got wind of what they were doing:

A popular burger chain has apologised for allowing diners in Brisbane to donate to an anti-abortion group.
Each month Grill’d restaurants give $500 to three local charities, encouraging patrons to decide which group gets more of the money by placing a bottle top in a jar.
More than 100 organisations apply each month in Queensland.
This month, the Toowong restaurant chose the Cherish Life association as one of the three groups.
Criticism spilled onto social media, with many perplexed by the chain’s conservative approach.
“Hmm. Local @GrilldBurgers has an anti-abortion group as one of its local groups this month. Not what I would have expected from them at all,” one critic tweeted.
Founder and managing director of Grill’d Simon Crowe apologised for Cherish Life being selected and said its ideals did not align with Grill’d.
“This time we didn’t apply the right vigour or discipline in deciding who gets in,” he told 612 ABC Brisbane.
“Unfortunately it’s a mistake that we made at our end.”
Mr Crowe said although everyone had a right to an opinion on subjects such as abortion, Grill’d was pro-choice.
“We are very much about pro-choice,” he said.
“We’ve removed the jar in question.
“Everyone has a right to have their opinion, but in this instance our opinion is about pro-choice.”

Um, that last line is such a doozey, let me run it by you one more time:

“Everyone has a right to have their opinion, but in this instance our opinion is about pro-choice.”

So let me see if I have got this straight: this business is so pro-choice that it will not allow any other choices except their own. They think everyone has a right to their own opinion, but they must be silenced if it differs from Grill’d. Right, Got it. Makes perfect sense to me.

Gotta love that commitment to choice: ‘You embrace our view on this matter or you will be silenced.’ Yep, sounds fair to me. And this phrase in this context has got to be the greatest non-sequitur of all time: ‘We are for choice in the abortion debate. We just do not want the one most affected by it to have any choice.’

The article did allow a brief word from the group concerned:

Cherish Life state president Teresa Martin said the organisation wanted to use the money to give pins to students to promote education about gestation.
“There is nothing to do with a pro-life, pro-choice issue on the jar,” Ms Martin said.
“We believe women deserve real information and real choice so they can make a choice and not just be shepherded down one path.
“I feel like this is an orchestrated campaign by pro-abortion people.”

It sure was orchestrated by the pro-death crowd, and their leftist media mates. This is standard operating procedure from the secular left. Shut down and shout down any contrarian voices. That is their take on freedom of speech. For the left, free speech means, ‘I have a right to speak – you shut up.’

Now because this is a private business, I do not necessarily begrudge them the right to refuse certain causes. But the glaring hypocrisy on display here and the appalling double standards certainly does get my goat. When you have folks ranting on and on about choice, all the while denying others their choices, then you know you have the usual leftish hypocrisy in action.

But there would be thousands more such cases. This is just the normal way the left goes about its business. It is called the end of freedom, free speech and democracy. Just the way the left likes it.

We encourage you all to send a letter of complaint expressing your dissatisfaction about the censorship of the situation to the OWNER of the chain as soon as possible:
Simon Crowe
Level 2, 4-10 Amsterdam Street
Richmond VIC 3121
or email him on: www.grilld.com.au/say-hi/

13 Replies to “Leftist Debate: Only One Voice Allowed”