Early on the disciples had to deal with this very matter, time and time again. For example, a faulty understanding of grace had led to a faulty lifestyle, and Paul had to rebuke both. This is clearly laid out in places like Romans 6:1-4 where Paul ties doctrine and living together:

What shall we say, then? Shall we go on sinning so that grace may increase? By no means! We are those who have died to sin; how can we live in it any longer? Or don’t you know that all of us who were baptized into Christ Jesus were baptized into his death? We were therefore buried with him through baptism into death in order that, just as Christ was raised from the dead through the glory of the Father, we too may live a new life. 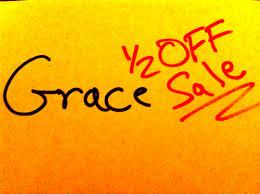 The error of preaching grace only, while neglecting the importance of holiness, sanctification and obedience is all too common. We can end up with a faulty view of the law (antinomianism) as we proclaim a faulty notion of grace (hyper grace). I have written about this often elsewhere. In one article about these matters I said this:

I can very strongly recommend two books which deal with all this in great detail. The two volumes are:
-Ernest Kevan, The Grace of Law: A Study in Puritan Theology. Soli Deo Gloria Publication, 1964, 2011.
-Mark Jones, Antinomianism: Reformed Theology’s Unwelcomed Guests? P&R, 2013.
Both books are absolutely vital in understanding antinomianism, and the modern-day hyper grace errors. The book by Jones is briefer but it offers a superb treatment of the various debates over antinomianism. He deals with the Reformers, the Puritans, and modern day examples.
Thus he examines books like Tullian Tchividjian’s 2011 volume, Jesus + Nothing = Everything. He is quite right to say of it, “his whole book is one lengthy antinomian diatribe, and it bears a striking resemblance to the content and rhetoric of various seventeenth-century antinomian writings.” See also his online review of the book here: www.meetthepuritans.com/2011/12/16/jesus-nothing-everything-an-analysis/
The grace of God is certainly a beautiful biblical truth. But if it is pushed at the expense of other biblical truths, then serious error can creep in. Basically all heresies and cults have this in common; they take some of God’s truth and elevate it, but downplay or ignore other parts of God’s truth. This is where distortion and error creep in.

They so emphasise the first bit of salvation – justification – which is indeed solely by grace through faith, that they ignore or minimise the second and very vital truth of ongoing sanctification. Indeed, they effectively replace sanctification with justification.
So the hundreds of New Testament commands to live holy lives, to obey, to grow in Christ, to put off the old man, to crucify the flesh, to grow in grace, to be transformed, to resist sin, and so on simply get overlooked or watered down. After all, if it is all of grace, there is nothing left for us to do. So sanctification tends to disappear altogether.
All the theological eggs are put into the justification basket, while sanctification is ignored or basically lost under justification. As Jones puts it, “the antinomians essentially subsume sanctification under justification”. But both are distinct and separate. Sure, along with glorification, they comprise a package deal, and cannot be left in isolation from each other. But they must not be conflated or confused either.
This is where the hyper grace crowd commit so much error and cause so much harm. They preach the glorious truth of justification by grace alone, but then overlook the hundreds of imperatives found in the New Testament which urge these newly justified believers to work out this wonderful salvation by growing in obedience and holiness – sanctification in other words.
These teachers don’t just overlook the doctrine of sanctification, but they often slam it. They poke fun at people who seek to live holy, God-pleasing lives, and rail at them for being legalists and the like. Read many of the books by the hyper grace teachers and you will find these charges being levelled over and over again.
Now, is there some legalism in the churches? Sure there is. But is everyone who preaches and teaches on living a holy life and a life pleasing to God a legalist? No, and if legalism is a problem in some churches today, from my vantage point, the opposite error of license is far more of a problem.

See here for more from this piece: billmuehlenberg.com/2015/02/16/antinomianism-and-the-hyper-grace-error/

I am repeating all this because one of the pastors who I mentioned in that earlier piece is now in some trouble. As one write-up says:

My family and I are members at Coral Ridge Presbyterian church where the senior pastor is Tullian Tchividjian. We have many elders. A few weeks ago, the elders told the church that Pastor Tullian was going to take a sabbatical for some time in order to tend to family issues. They assured the church that this wasn’t a matter of disqualification, and they’d keep us updated. Today was that update. Apparently, Paul Tripp flew down to counsel Tullian and his wife, and Paul walked away from it finding no reason to disqualify Pastor Tullian from the preaching ministry. However, a few days later, Tullian resigned, disclosing that he had in fact had an extramarital relationship.

Now the writer of this article defends Tchividjian and his grace teachings. Needless to say, I differ with the author, and find his teachings to have erred too far on the side of antinomianism and hyper grace or cheap grace. And as I said at the beginning of this article, there often can be a close connection between one’s teaching and one’s practice.

So here we have one pastor who wanted to emphasise grace – always an admirable thing – but was it perhaps at the expense of other clear biblical truths? Did he go too far in one direction, and lose the biblical balance? And was this a factor in his just-revealed sin? It could well be.

I of course am not saying that all bad teaching will always lead to bad living, immorality, and so on. But often they go together. And of course one can be teaching sound doctrine and still go off into flagrant sin, including sexual sin. So I am also not saying that if we just have really good doctrine, we will never fall into sin and failure.

But the point I am making is the point the New Testament seems to be making: bad theology and poor teaching can and does often lead to bad living and sinful activities. Thus we need to heed carefully what Paul says in 1 Timothy 4:16: “Watch your life and doctrine closely”.

Both go together and cannot be separated. So we must concentrate on right belief, and right behaviour. Both are vitally important and both are linked together. We must be champions of both orthodoxy and orthopraxis. One without the other is just not biblical Christianity.

As for Tchividjian, we of course need to pray for him and intercede for him and his family. And we need to realise that we are all vulnerable here. But we must also recognise the role that dodgy teaching can have in all this. Cheap grace can readily lead to cheap living. Thus we need to be on our guard against both.