In America today they jail Christians, not for breaking any law, but for standing true to their Christian convictions. Kim Davis is now in jail because she had the audacity to resist the pink mafia, and to stand against judicial tyranny. That is what has now become of the land of the free.

Perversion is now politically protected, while marriage and family and purity are under attack. This is a war against Christianity, and of course a war against the One True God. A country founded on biblical principles and the notion of freedom, especially religious freedom, is now a nation at war with Christianity.

And as I mentioned, Kim Davis broke no laws. She upheld the laws of Kentucky, and for doing so, was jailed. Here is what the law states:

402.005 Definition of marriage. As used and recognized in the law of the Commonwealth, “marriage” refers only to the civil status, condition, or relation of one (1) man and one (1) woman united in law for life, for the discharge to each other and the community of the duties legally incumbent upon those whose association is founded on the distinction of sex. Effective: July 15, 1998 History: Created 1998 Ky. Acts ch. 258, sec. 4, effective July 15, 1998….
402.010 Degree of relationship that will bar marriage. (1) No marriage shall be contracted between persons who are nearer of kin to each other by consanguinity, whether of the whole or half-blood, than second cousins. (2) Marriages prohibited by subsection (1) of this section are incestuous and void. History: Amended 1946 Ky. Acts ch. 124, sec. 1. — Recodified 1942 Ky. Acts ch. 208, sec. 1, effective October 1, 1942, from Ky. Stat. sec. 2096. 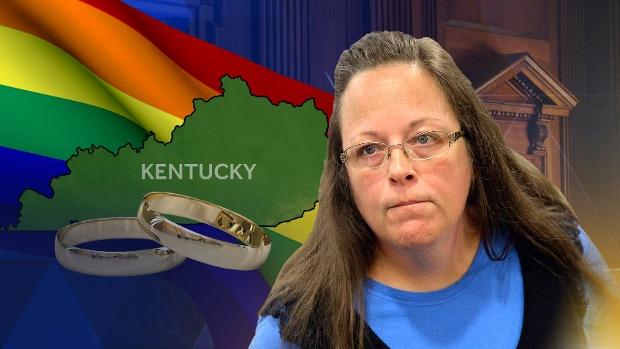 Also, in the 2004 election this ballot measure was passed by 75 per cent of Kentucky voters: “Amend the Kentucky Constitution ‘to provide that only a marriage between one man and one woman shall be a marriage in Kentucky, and that a legal status identical to or similar to marriage for unmarried individuals shall not be valid or recognized?’”

So everything Kim Davis did was to uphold the laws of the land. But for doing so, the power of the secular state – fuelled by the demonic wrath of the homosexual militants – came down upon her like a ton of bricks, and she is now languishing in jail.

I have already heard too many absolutely clueless and compromised Christians actually attacking her, and defending her persecutors. Mind-boggling. Even some thinkers who should know better have been a bit back and forth here. For example, one great commentator whom I often quote wrote a piece a few days ago and equivocated a bit about this case, so I did not run with anything of his.

But today he has come out with a new piece, admitting he got things a bit wrong. I am very glad Matt Walsh had a rethink here. Partly this was due to his reading of a great article by Douglas Wilson, which I quoted from here: billmuehlenberg.com/2015/09/03/christianity-the-constitution-and-marriage-wars/

It was indeed a superb piece and I am glad it helped Walsh to get a bit more clarity here. His entire article is well worth reading, but let me offer a few snippets from it:

The Obergefell v. Hodges decision had absolutely nothing to do with the law. Gay “marriage” was forced upon the states by five human beings in black robes sitting in a big stone temple in D.C. The Constitution, which clearly says nothing about gay “marriage,” was ignored. The consent of the people — many of whom live in states, like Kentucky, where the Constitution expressly defines marriage as between a man and a woman — was not respected or even considered. If Kim Davis is a government official making up her own laws as she goes along, she’s only following the precedent of the federal government. The only difference is that her “made-up” law is the one that existed before a handful of federal judges made up a new one. So who is the lawless anarchist here?
Gay “marriage” is itself nothing but the will of the elites. It is as much a legal abomination as a moral one. Many people have said, “Well, gay ‘marriage’ is the law of the land, so that’s that,” but what they mean is, “Well, five people in Washington support gay ‘marriage,’ so that’s that.” No, that isn’t that. That’s tyranny. That’s injustice. That’s illegal. It might be true that the Supreme Court has, over time, seized the power to write laws and reshape ancient human institutions according to their radical liberal ideologies, but that doesn’t make it law. It might be “law,” but it isn’t law. Just as gay “marriage” might be “marriage,” but it can never be marriage. The whole thing is a travesty, a sham, an outrage.
So are we morally obligated to cooperate with the evil agendas and the rampant tyrannies of the federal government? Is a clerk in Kentucky, elected by the people of her county and subject to the Constitution of her state, morally required to respect the drunken dictates of judicial activists in Washington? Kim Davis says no. And I think it might be time for the rest of us to come to that same conclusion.

Third, Kim Davis is not preventing anyone from getting married. For one thing, they can just hop in the car and head on down to the next county. It will take a few minutes, but I suspect they’ll survive. Any gay couples waiting around for this Davis situation to be settled are obviously just trying to make a statement, which is probably why they showed up at the clerk’s office with a camera crew.
But for another thing, gay “marriage,” even if it’s legitimized with the obligatory paperwork, still cannot exist. Gay “marriage” is an impossibility, a non sequitur. It has been not only illegally imposed on us, but impossibly. No matter what the Supreme Court says, or what anyone says, men and women will still be different. And it is that difference that defines marriage, that breathes life into it, that gives it a purpose, that makes it integral to society.
We have, then, two different things. On the one hand, we have the relationship between a man and a woman. On the other, the relationship between men and men or women and women. Say what you want about these groups, but you certainly cannot say they are the same. Since the beginning of human civilization up until about 87 seconds ago, all societies have recognized that the man-woman relationship is special and powerful. This bond gives birth to new people, and this new collection of people are what we call “families,” and these families serve as the very bedrock and foundation of humanity. There are other reasons for marriage, but procreation is a primary and defining reason. A relationship that is, in principle (not through deformity or disease or old age or whatever), lacking in this immense and mysterious power cannot be considered its equal. This is not just a moral judgment, but a logical and biological one.
Gay couples cannot produce families. They cannot produce anything. They serve no practical purpose to society. Two men love each other, fine, but there is no reason to officially recognize that love or give it a name. And if we do give it a name, it is absurd to give it the same name when it is so vastly different. The correct name is the one scripture gives it: sin.

Fifth, so here we are. Kim Davis sits in jail. Gay “marriage” has been illegally imposed on the people. The government is operating outside the bounds of the Constitution, morality and Natural Law. Christians in government are being locked in chains while thugs and crooks run the country. Babies are being murdered and sold for parts, and all with the approval and funding of our leaders in Washington. Cops are being hunted down and murdered in the street while race hustlers openly egg on the killers and the president does nothing to stop it.
America is ruled by the whims of petty despots. America is a lawless country. They will make a sacrifice of Kim Davis, but make no mistake that she is standing against lawlessness, not for it. And now the rest of us have to decide if we will do the same.
This is a nation that has rejected truth, constitutional law and God’s law. Our culture is floating untethered in the abyss, besieged by confusion and moral chaos. If we think we can restore peace and truth by “following the law,” I believe we are in for a rude awakening. The law is dead. We are left with two choices: follow truth, or obey the dictates of our culture and the godless tyrants who lead it.
Kim Davis took door No. 1, and it landed her behind bars.
Where will it take us if we open it?
I think we will soon find out.

We sure are finding out. The trouble is, some of us have been warning about this for decades now. We insisted that the greatest assault on faith, family and freedom would come at the hands of the homosexual activists. The media and the other side of course laughed at us. And I had plenty of Christians laugh at me as well.

But now as Christians are being jailed, losing their jobs, and being heavily fined, it may be time to say, “We told you so.” Yet incredibly many Christians are still fully asleep, utterly clueless as to the war that has been declared against them.

Will they ever wake up? And if they do, will it then be too late?

22 Replies to “Perversion Versus Purity: The Homosexual War Against God”