It has come to this: Christians who stand for their faith, for conscience, and for religious freedom, are now being jailed in America. County Clerk Kim Davis is now in jail for refusing to violate her Christian conscience and do that which is immoral.

Some of us have warned for decades now that this is exactly where all this is heading. The homofascists will stop at nothing to achieve complete compliance to their agenda. All opposition will be dealt with in the severest fashion. And all this in the name of tolerance and acceptance of course.

Prior to her court appearance, Kim said this:

I have weighed the cost…. But it is through God and His grace and strength that I stand, that I can have a smile on my face. Those licenses leave my office through my authority. I cannot be party to that. I just can’t. … If the Word of God isn’t worth fighting for, I don’t know anything that is. We serve a living God who is alive and on the throne. He knows exactly where I am, and I know that His hand is upon me and upon His people. He is in full control.

Some champions for liberty have immediately sprung to her defence. Republican presidential candidate Ted Cruz courageously said this: 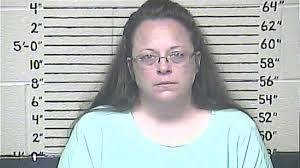 Today, judicial lawlessness crossed into judicial tyranny. Today, for the first time ever, the government arrested a Christian woman for living according to her faith. This is wrong. This is not America. I stand with Kim Davis. Unequivocally. I stand with every American that the Obama Administration is trying to force to choose between honoring his or her faith or complying with a lawless court decision.
In dissent, Chief Justice Roberts rightly observed that the Court’s marriage decision has nothing to do with the Constitution. Justice Scalia observed that the Court’s decision was so contrary to law that state and local officials would choose to defy it.
For every politician — Democrat and Republican — who is tut-tutting that Davis must resign, they are defending a hypocritical standard. Where is the call for the mayor of San Francisco to resign for creating a sanctuary city — resulting in the murder of American citizens by criminal illegal aliens welcomed by his lawlessness?
Where is the call for President Obama to resign for ignoring and defying our immigration laws, our welfare reform laws, and even his own Obamacare? When the mayor of San Francisco and President Obama resign, then we can talk about Kim Davis.
Those who are persecuting Kim Davis believe that Christians should not serve in public office. That is the consequence of their position. Or, if Christians do serve in public office, they must disregard their religious faith–or be sent to jail.
Kim Davis should not be in jail. We are a country founded on Judeo-Christian values, founded by those fleeing religious oppression and seeking a land where we could worship God and live according to our faith, without being imprisoned for doing so. I call upon every Believer, every Constitutionalist, every lover of liberty to stand with Kim Davis. Stop the persecution now.

Various marriage and family groups have also condemned the incarceration, including NOM:

The National Organization for Marriage (NOM) today sharply criticized federal judge David Bunning for jailing Kentucky clerk Kim Davis because she has refused to issue same-sex ‘marriage’ licenses in violation of her deeply-held religious beliefs. The group blamed the US Supreme Court for creating the conflict by redefining marriage and refusing to stay legal action against Davis pending her appeal.
“It is outrageous to jail Kim Davis because she does not want to personally be part of certifying same-sex ‘marriages’ that violate her deeply-held religious beliefs about the nature of marriage,” said Brian Brown. “What this judge is saying is that now that the Supreme Court has illegitimately redefined marriage, every single person in government if not in the country must stand in salute and participate in the act. That is profoundly wrong and violates the spirit of federal law which provides that the government must seek ways to reasonably accommodate people’s religious views in the workplace.”
This past June the US Supreme Court ruled to impose same-sex ‘marriage’ on the nation when it determined that state laws limiting marriage to one man and one woman were unconstitutional.
“While Judge Bunning is the instrument of the inhumane punishing of Kim Davis, the authors of it are the five justices of the US Supreme Court who illegitimately, without a shred of constitutional authority, redefined marriage without any regard to the profound implications their ruling would have on law-abiding, faithful Americans,” Brown said. “With this ruling, the idea of religious freedom that is at the heart of our constitution has been eliminated when it comes to exercising beliefs about marriage. It’s a profound shredding of the constitution on the altar of gay activism.”
Brown called on federal and state officials to find a way to accommodate people who object to gay ‘marriage’ on religious grounds from having to participate in the act.
“It was utterly wrong for the courts to have ordered every state to license same-sex ‘marriages’ and it is judicial tyranny for judges to say that every individual person must be involved in the act despite their deeply-held beliefs. We call on federal and state officials to immediately enact laws to accommodate the beliefs of individuals who do not wish to be a party to something they consider to be wrong.”

At a time like this it is worth recalling earlier acts of defiance to an unjust state, and the place of Christian civil disobedience. On April 16, 1963 Martin Luther King, Jr. penned his now famous “Letter from a Birmingham Jail”. Parts of it are worth repeating here:

While the particulars of these two situations of course differ, the underlying principles remain the same. When unjust and immoral laws are passed, Christians have an obligation to consider carefully and prayerfully how they might deal with such laws. Civil disobedience, and a willingness to suffer the consequences, is one such option.

We need to uphold Kim Davis in our prayers, and do all we can to help and support her during this difficult period. And we need to finally get our heads out of the sand as to the reality of homo-tyranny. Things will simply get much worse as the homosexual militants ramp up their war against any and all opposition to their nefarious agenda.

20 Replies to “Christians Jailed, Homofascism Out of Control”