Let me offer just one such passage on true and false prophets as found in Matthew 7:15-20:

Watch out for false prophets. They come to you in sheep’s clothing, but inwardly they are ferocious wolves. By their fruit you will recognize them. Do people pick grapes from thornbushes, or figs from thistles? Likewise, every good tree bears good fruit, but a bad tree bears bad fruit. A good tree cannot bear bad fruit, and a bad tree cannot bear good fruit. Every tree that does not bear good fruit is cut down and thrown into the fire. Thus, by their fruit you will recognize them. 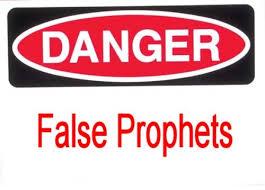 Much can be said about this text, but here I want to focus on just two excellent expository preachers who have both dealt with this passage. The first is the great Martyn Lloyd-Jones, and the second is James Montgomery Boice. Both have their sermons on the Sermon on the Mount available in book form, and they are both well worth quoting from.

The superb volume by MLJ, Studies in the Sermon on the Mount, should be in every Christian’s library. Here are some snippets from his discussion of this passage:

That is the only way to understand rightly this picture of the false prophets. The false prophet is a man who has no “strait gate” or “narrow way” in his gospel. He has nothing which is offensive to the natural man; he pleases all. He is in ‘sheep’s clothing’, so attractive, so pleasant, so nice to look at. He has such a nice and comfortable and comforting message. He pleases everybody and everybody speaks well of him. He is never persecuted for his preaching, he is never criticized severely.

In the same way it does not emphasize repentance in any real sense. It has a very wide gate leading to salvation and a very broad way leading to heaven. You need not feel much of your own sinfulness; you need not be aware of the blackness of your own heart. You just “decide for Christ” and you rush in with the crowd, and your name is put down, and is one of the large number of “decisions” reported by the press. It is entirely unlike the evangelism of the Puritans and of John Wesley, George Whitefield and others, which led men to be terrified of the judgment of God, and to have an agony of soul sometimes for days and weeks and months. John Bunyan tells us in his Grace Abounding that he endured an agony of repentance for eighteen months. There does not seem to be much room for that today. Repentance means that you realize that you are a guilty, vile sinner in the presence of God, that you deserve the wrath and punishment of God, that you are hell-bound. It means that you begin to realize that this thing called sin is in you, that you long to get rid of it, and that you turn your back on it in every shape and form. You renounce the world whatever the cost, the world in its mind and outlook as well as its practice, and you deny yourself; and take up the cross and go after Christ. Your nearest and dearest, and the whole world, may call you a fool, or say you have religious mania. You may have to suffer financially, but it makes no difference. That is repentance. The false prophet does not put it like that. He heals “the hurt of the daughter of my people slightly”, simply saying that it is all right, and that you have but to “come to Christ”, “follow Jesus”, or “become a Christian”.

We do not like this kind of teaching against false prophets today. We are living in days when people say that, as long as a man claims to be a Christian at all, we should regard him as a brother and go on together. But the reply is that our Lord said, “Beware of false prophets.” These awful, glaring warnings are there in the New Testament because of the very kind of thing to which I have been referring. Of course, we must not be censorious; but neither must we mistake friendliness and affability for saintliness. It is not a question of personalities. We must not despise these people. Indeed, Dr. Alexander MacLaren is right when he says that they are unconscious hypocrites. It is not that they are not nice and pleasing; they are. In a sense that is their greatest danger, and that is what makes them such a source of danger. I am emphasizing this matter because, according to our Lord, we should always be facing it. There is a way that leads to “destruction”, and the false prophet does not believe in “destruction”.

James Montgomery Boice has also had his expository sermons on the Sermon on the Mount issued in book form, and he is also well worth quoting from. He says this, in part, about Matthew 7:15-20:

According to Jesus, the danger is not so much in the fact that there are going to be wolves in the world – although that is perfectly true – but that there are going to be wolves who have disguised themselves as sheep. In other words, the danger lies in the fact that there are going to be agents of the devil in the church.
Someone will say, “Do you mean to tell me that God will allow men who are influenced by Satan to become church members?” The answer is “Yes, indeed.” And not only that, he will also allow them to become ministers and speak from the pulpit. This is the real meaning of 2 Corinthians 11:14-15 which says, “For Satan himself masquerades as an angel of light. It is not surprising, then, if his servants also masquerade as servants of righteousness. Their end will be what their actions deserve.”
What is a prophet? Today the word usually means one who is able to tell what is coming in the future. In biblical times it had a much broader meaning. A prophet was one who spoke for another and particularly one who spoke for God….
When we carry this understanding of the word over into Christ’s teaching, we see that Jesus actually is warning against men who will appear in the churches and pretend to speak for God when their teaching is really of the devil. These are the men spoken of by Jeremiah: “I did not send these prophets. . . . I did not speak to them, yet they have prophesied. But if they had stood in my council, they would have proclaimed my words to my people and would have turned them from their evil ways and from their evil deeds” (Jer. 23:21-22).
Do we have false prophets today? Do we have wolves in sheep’s clothing? We certainly do. Moreover, we do not only have them in the pews and the pulpits. We have them in the denominational structures, in the seminaries, and in the church-related colleges. I find it amusing, in the light of our text, that today we call an academic degree or diploma a sheepskin. For some professors and ministers clearly cover their intentions with the sheepskins of higher learning while using their knowledge of the Bible and church history to damage the faith of those who listen to them. We are to be warned against such teachers.

He goes on to list various ways we can recognise false teachers and false prophets. One way is this:

False prophets do not have disturbing doctrines in their messages, even though the true state of man demands it. Their message is one of false peace. Jeremiah says, “They dress the wound of my people as though it were not serious. ‘Peace, peace,’ they say, when there is no peace.” Apparently Jeremiah thought that this truth was important enough to state more than once, for the identical verse occurs both in Jeremiah 6:14 and 8:11. And he would undoubtedly say of all the false prophets, as Arthur Pink does in An Exposition of the Sermon on the Mount, “There is nothing in their preaching which searches the conscience and renders the empty professor uneasy, nothing which humbles and causes their hearers to mourn before God; but rather that which puffs up, makes them pleased with themselves and to rest content in a false assurance.”…
True teaching involves the realities of man’s depravity and sin, God’s wrath and coming judgment, the need for repentance, and the answer to man’s sin in Christ’s vicarious atonement. Any teaching that omits these elements is erroneous.

5 Replies to “On False Prophets”