With the Australian government now committed to taking 12,000 Syrian refugees, with an emphasis on persecuted Christians, a lot of really dumb reactions have been forthcoming. As usual, it mainly comes from the leftists and their allies, including the Muslim community.

Australian Islamic leaders have claimed this is just “bigoted fear mongering from the Abbott government”. Why are we not surprised to hear this foolish rhetoric coming from them? But the really shocking thing is when we have Christian leaders also repeating this foolishness.

As expected, segments of the hyper-leftist Uniting Church of Australia are pushing this line. The UCA in WA has said any such refugee intake must be based on “non-discriminatory practices”. And Tim Costello of World Vision also incredibly claims we are being “discriminatory” to favour persecuted Christians!

He said: “I think the only appropriate response is a non-discriminatory policy. It’s about protection based on need. I suspect there will be Christians in that number. But to move to a basis of just one religion, which is a bit like saying, you know, one colour of skin, would be, you know, discriminatory and not sensible.”

Umm no Tim, Christians of course come in all skin colours, and it is not unjust discrimination to target those who are suffering the greatest. Every nation, and every person, every day of the week must discriminate in all sorts of areas. Households must decide how many children they have, and/or how many guests they can accommodate, for example. 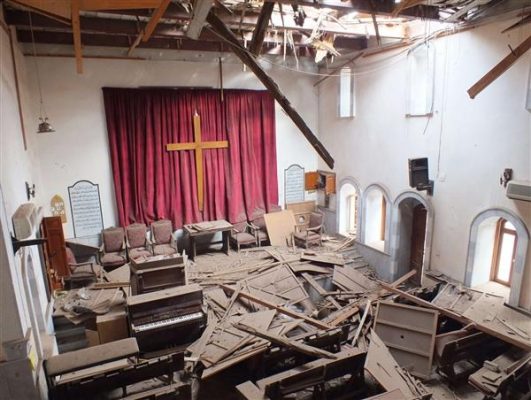 Nations of course must do exactly the same. Not to carefully and rationally discriminate as to who and how many people are allowed into a country is to guarantee the end of that country. With no sensible controls and restrictions in place, the host country will quickly devolve into the sort of country the refugees are fleeing from.

And I have already mentioned in previous articles two key issues about Muslim refugees: one, we know that many of them are in fact jihadists seeking to get a free pass into the West to wage war against it. Two, there are plenty of wealthy Muslim nations in the immediate vicinity which are refusing to take in any refugees.

Now that is the height of hypocrisy, and genuine discrimination. They refuse to take in their own, and some have even said the reason for this is because they are worried about terrorism! Why can Muslim nations be rightly worried about Muslim terrorism while Western nations are just supposed to turn a blind eye to all this, and take in anyone who demands to be let in? That of course is a recipe for national suicide.

And don’t get me started on the 100,000 air-conditioned tents that can house over 3 million people which are sitting empty in Saudi Arabia. See the story – and all the pics – here: www.infowars.com/saudi-arabia-has-100000-empty-air-conditioned-tents-that-can-house-3-million-people-yet-has-taken-zero-refugees/

Thankfully there are Christians and non-Christians alike who are far more sensible here on these matters. Paul Sheehan, a non-believer as far as I am aware, gets it right in a recent article about the sad state of persecuted Christians in the Middle East:

The Arab spring was a Western fantasy. Saudi Arabia and Iran continue to mobilising resources to fund their proxies in the Sunni-Shiite struggle, a reason why the Saudis are pumping as much oil as they can and Iran is desperate to re-join the international oil marketplace.
Syria is thus the eye of a broader storm and the Muslim world is exporting its instability to Europe, via a mass exodus of people. What can or should Australia do? There is nothing we can do about the ancient Sunni-Shia schism, but we can protect those who have become collateral damage – Christians.
One of the reasons a majority of the electorate supported the Coalition’s tough line on people smugglers was that the biggest beneficiaries would be genuine refugees. Now is the hour. Because the border policies have been effective, Australia is placed to significantly ramp up its intake of refugees.
There is no chance the electorate wants to import the Sunni-Shia schism into Australia via a large influx of Muslims dislocated by this conflict. That is a political reality. There have already been too many incidents of Sunni-Shia conflict in Australia, and far too many incidents of anti-Western Muslim militancy, or worse.
If either the Coalition or Labor were to announce a large-scale program of humanitarian immigration from the war zone, it would encounter the public’s aversion to the systemic failure of democracy, pluralism and religious tolerance in the Arab world. But that does not mean Australians would not be willing to support a significantly larger humanitarian intake from the region.
For the past 20 years Christians have been ethnically cleansed across much of the Middle East as part of the rise of Muslim militancy. In Syria, before the civil war, more than 1 million Syrian Christians lived in security and were better educated than the general population. That number has been decimated.
In Iraq, the number of Christians has plunged from 1.4 million to about 250,000 over the past 40 years, displaced by waves of civil war, invasion and ethnic cleansing. Most Christians who remain live in the Kurdish-controlled area.
Another 300,000 Christians live under the Islamic theocracy of Iran. Most are ethnically Armenian or Assyrian.
Would it be in breach of our discrimination laws to prioritise Christians as refugees? No. I’ve checked.
About 1 million Arab Christians are currently displaced and have no chance of returning to safety and normalcy in their own countries. Unlike displaced Muslims they have no diaspora in the region to absorb them.
The common sense aversion by people to a large-scale influx of refugees, of any kind, is the sheer cost and the stress they place on resources. This is rational. Refugees have to be housed, sustained, educated and trained. Unemployment among unskilled workers is already high in Australia. The federal government is already running a budget deficit.
There is, however, a large pre-existing network of private social services – church groups – with the potential to sponsor thousands of refugees in the short-term, providing them with places to stay in the community.
Australia’s annual refugee resettlement quota, currently 6000, is an arbitrary number (though it has real meaning in the budget estimates). With the help of church and welfare groups, that arbitrary number could be significantly increased.
This is the benefit of having secure borders and credibility on border security, which the Abbott government has achieved.

And I have already mentioned Lord Carey who too was thinking clearly on this matter. Let me quote him again:

But the frustration for those of us who have been calling for compassion for Syrian victims for many months is that the Christian community is yet again left at the bottom of the heap.
According to the Barnabas Fund, a charity which recently resettled some 50 Syrian Christian families in Poland, Mr Cameron’s policy inadvertently discriminates against the very Christian communities most victimised by the inhuman butchers of the so-called Islamic State. Christians are not to be found in the UN camps, because they have been attacked and targeted by Islamists and driven from them. They are seeking refuge in private homes, church buildings and with neighbours and family.
They are the most vulnerable and repeatedly targeted victims of this conflict. Indeed, a hundred years after the Armenian and Assyrian genocide, in which over a million Christians are estimated to have been killed by Ottoman Muslims, the same is happening today in the form of an ethnic cleansing of Christians in the region. Christians have been crucified, beheaded, raped, and subjected to forced conversion. The so-called Islamic State and other radical groups are openly glorifying the slaughter of Christians.
Britain should make Syrian Christians a priority because they are a particularly vulnerable group. Furthermore, we are a Christian nation with an established Church so Syrian Christians will find no challenge to integration. The churches are already well-prepared and eager to offer support and accommodation to those escaping the conflict.
Some will not like me saying this, but in recent years, there has been too much Muslim mass immigration to Europe. This has resulted in ghettos of Muslim communities living parallel lives to mainstream society, following their own customs and even their own laws. Isn’t it high-time instead for the oil-rich Gulf States to open their doors to the many Muslims who are fleeing conflict? Surely if they are concerned for fellow Muslims who prefer to live in Muslim-majority countries, then they have a moral responsibility to intervene.

Back home another religious leader made the same appeal:

The Archbishop of Sydney has called on the Australian government to increase its intake of refugees and to prioritise the needs of Christians as the crisis in Europe escalates. In his homily at St Mary’s Cathedral on 6 September, Archbishop Anthony Fisher OP asked “that the overall refugee intake be very substantially increased and that particular preference be given to persecuted Christians from Syria and Iraq and other religious minorities who have nowhere else to go. We should also keep in mind the minorities within the Muslim community in these countries who are persecuted by Islamists and other Muslims.”

Finally, someone who has been there and done that offers some commonsense realism here:

We certainly expect the secular left and the various Muslim lobby groups to make a big stink about Australia’s sensible approach to the Syrian refugee crisis. But it is really sad when Christian leaders join in the attack, pushing the same foolish and unhelpful agendas.

12 Replies to “Refugees and “Discrimination””