I am reading the book of Daniel once again and have been so impressed with the fact that it is such an utterly remarkable book in so many ways. The short book is divided into two main parts: chapters 1-6 are narratives about Daniel and his friends, with famous miraculous accounts along the way.

The last six chapters deal with apocalyptic themes and prophecies about the nations. Both sections highlight the sovereignty of God, and how we need not fear what mere nations can do. God is in control, and he is working out his purposes. 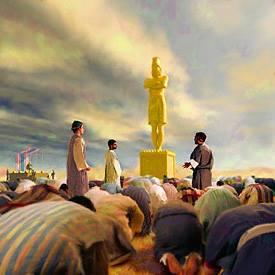 Those writing about or commenting on this book all tend to stress this major theme. Stephen Miller in his commentary writes, “Without doubt the principal theological focus of the book is the sovereignty of God. Every page reflects the author’s conviction that his God was the Lord of individuals, nations, and all of history.”

James Montgomery Boice says this: “The great and most important theme of Daniel is that there is but one God, who is Jehovah, and that he is sovereign over the events of history.” Gleason Archer put it this way: “The principal theological emphasis in Daniel is the absolute sovereignty of Yahweh, the God of Israel.”

Tremper Longman speaks of “the overall theme of divine sovereignty” but reminds us that “his sovereignty is not described abstractly in this book, but in the midst of the historical process, in the nitty-gritty of life.” Ernest Lucas concurs: “The central theme running through this book is the sovereignty of the God of Israel. However, in the stories this sovereignty is seen, ideally, as something that can be worked out through human rulers.”

But let me go back to the book and quote from passages which either provide clear examples of God’s sovereign hand, or in fact declare it. And his rule contrasts with the fleeting, feeble rule of mere men. There are plenty to choose from – here are some.

Daniel 2:19-21 During the night the mystery was revealed to Daniel in a vision. Then Daniel praised the God of heaven and said:
“Praise be to the name of God for ever and ever;
wisdom and power are his.
He changes times and seasons;
he deposes kings and raises up others.
He gives wisdom to the wise
and knowledge to the discerning.”

Daniel 4:34-37 At the end of that time, I, Nebuchadnezzar, raised my eyes toward heaven, and my sanity was restored. Then I praised the Most High; I honored and glorified him who lives forever.
His dominion is an eternal dominion;
his kingdom endures from generation to generation.
All the peoples of the earth
are regarded as nothing.
He does as he pleases
with the powers of heaven
and the peoples of the earth.
No one can hold back his hand
or say to him: “What have you done?”
At the same time that my sanity was restored, my honor and splendor were returned to me for the glory of my kingdom. My advisers and nobles sought me out, and I was restored to my throne and became even greater than before. Now I, Nebuchadnezzar, praise and exalt and glorify the King of heaven, because everything he does is right and all his ways are just. And those who walk in pride he is able to humble.

Daniel 5:22-31 “But you, Belshazzar, his son, have not humbled yourself, though you knew all this. Instead, you have set yourself up against the Lord of heaven. You had the goblets from his temple brought to you, and you and your nobles, your wives and your concubines drank wine from them. You praised the gods of silver and gold, of bronze, iron, wood and stone, which cannot see or hear or understand. But you did not honor the God who holds in his hand your life and all your ways. Therefore he sent the hand that wrote the inscription.
“This is the inscription that was written:
mene, mene, tekel, parsin
“Here is what these words mean:
Mene: God has numbered the days of your reign and brought it to an end.
Tekel: You have been weighed on the scales and found wanting.
Peres: Your kingdom is divided and given to the Medes and Persians.”
Then at Belshazzar’s command, Daniel was clothed in purple, a gold chain was placed around his neck, and he was proclaimed the third highest ruler in the kingdom. That very night Belshazzar, king of the Babylonians, was slain, and Darius the Mede took over the kingdom, at the age of sixty-two.

Daniel 6:25-28 Then King Darius wrote to all the nations and peoples of every language in all the earth:
“May you prosper greatly!
“I issue a decree that in every part of my kingdom people must fear and reverence the God of Daniel.
“For he is the living God
and he endures forever;
his kingdom will not be destroyed,
his dominion will never end.
He rescues and he saves;
he performs signs and wonders
in the heavens and on the earth.
He has rescued Daniel
from the power of the lions.”
So Daniel prospered during the reign of Darius and the reign of Cyrus the Persian.

Daniel 7:26-28 “But the court will sit, and his power will be taken away and completely destroyed forever. Then the sovereignty, power and greatness of all the kingdoms under heaven will be handed over to the holy people of the Most High. His kingdom will be an everlasting kingdom, and all rulers will worship and obey him.” ‘This is the end of the matter. I, Daniel, was deeply troubled by my thoughts, and my face turned pale, but I kept the matter to myself.’

It is in the light of all these incredible words that the hardships, trials and persecutions which believers today experience at the hands of tyrannical and anti-Christian nations must be seen. The nations may rage and wage war against the saints, but they are but a tiny blip in the grand plan.

As Iain Duguid comments, “God is sovereign over all of the events of world history, but his greatest concern is with the fate of his own people. Alexander the Great was one of the greatest military strategists, one of the pivotal men in world history. Yet in Daniel 8 he is a mere footnote, meriting barely a mention before the vision moves on to the more important matter of the little horn and his assault on God’s people, and even on God himself.”

Human rulers rate very low indeed from the divine perspective. In fact we get a pretty poor view of them in the book Daniel. As Joyce Baldwin remarks, in these visions we see that “human kingdoms were shown to be short-lived”. Also, “far from evolving towards a Utopia, human kingdoms were declining in value (chapter 2) and becoming more beastly (chapter 7).”

Or as Lucas puts it, God’s sovereignty can be seen to be worked out through human rulers. “Yet in ch. 7 all human rulers seem to be portrayed as rampaging beasts who are in some measure opposed to God, and this seems to be reinforced in the following visions.”

The good news is, as Ronald Wallace puts it, we have the “assurance that God had control and foreknowledge of the forces that seemed to dominate human history.” Or as Archer writes, “The theme running through the whole book is that the fortunes of kings and the affairs of men are subject to God’s decrees, and that he is able to accomplish his will despite the most determined opposition of the mightiest potentates on earth.”

This is good news indeed and well worth keeping to the forefront as we deal with increasingly hostile and anti-godly governments and world systems. As we read in Daniel 2:44-45:

“In the time of those kings, the God of heaven will set up a kingdom that will never be destroyed, nor will it be left to another people. It will crush all those kingdoms and bring them to an end, but it will itself endure forever. This is the meaning of the vision of the rock cut out of a mountain, but not by human hands – a rock that broke the iron, the bronze, the clay, the silver and the gold to pieces.”

4 Replies to “On the Book of Daniel”