That all sorts of nasty and destructive things happen in nature is not in dispute. But for the Christian, how much of this might be the result of the direct hand of God is a matter of some debate. The recent disaster in Mecca which took so many lives is a case in point.

More on that in a moment, but a few general theological truths first. While in the Old Testament we had prophets of God who could tell us that a certain disaster was directly from the hand of God, we do not have that same clear prophetic word today. 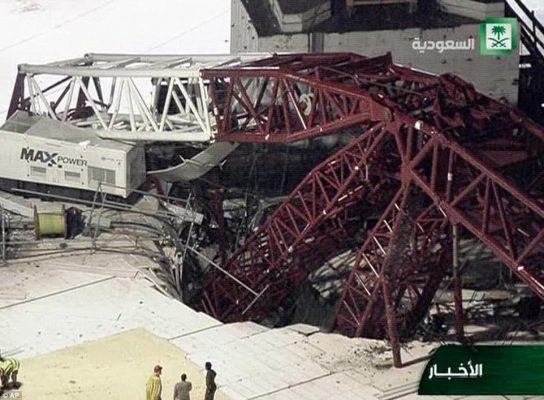 Thus the Christian must be cautious in commenting on particular calamities, disasters or tragedies. In a fallen world such things will of course happen. But whether they are a direct judgment of God for a particular sin is not always so clear cut.

In a fallen world we all suffer. Bad things happen in the world we live in. And because of God’s common grace, we all experience the goodness of God as well. Jesus made this quite plain in Matthew 5:45: “He causes his sun to rise on the evil and the good, and sends rain on the righteous and the unrighteous.”

Thus we need to be careful in rushing to judgment when some disaster strikes. Was God directly involved in it, and was it a specific judgment of God on specific sin? Maybe, maybe not. We simply do not always know with certainty on such matters.

Consider homosexuality and HIV. Is the latter a direct, divine judgment on the former? Well we certainly have real cause and effect going on here. Smoke three packs of cigarettes a day and you will likely get lung cancer. Engage in male homosexual activity, and chances will greatly increase of getting HIV.

But not all cases of HIV/AIDS of course are due to this. What about various innocent people getting HIV through contaminated blood supplies, as has happened to many haemophiliacs for example? Is this a direct judgment of God on them as well?

So caution is needed here. Let me return to the story coming out of Mecca. As one news report puts it:

A Saudi official has confirmed that the annual hajj to Mecca will go ahead, despite the horrific crane disaster that killed 107 people and wounded 238 in the city yesterday. The tragedy occurred when a crane crashed through the ceiling of the Grand Mosque of Mecca, the largest mosque in the world, amid high winds and thunderstorms on Friday afternoon. An investigation has been launched today, to probe claims that the health and safety standards at the mosque were insufficient.
Some critics have claimed that the authorities were negligent in allowing a series of cranes to tower over the site, as hundreds of thousands of Muslims converge at the holy site for the annual hajj pilgrimage. It has been confirmed today that this year’s hajj will still go ahead despite the disaster, and is expected to begin on September 21.
The annual pilgrimage is one of the largest religious festivals in the world, and last year drew two million worshipers. One of the five pillars of Islam requires every able-bodied Muslim to perform the Hajj pilgrimage at least once in their lifetime. Muslim faithful from about 160 countries converge on the Islamic city and other locations in western Saudi Arabia to complete the holy journey.
A Saudi official, who declined to be named, said: ‘It definitely will not affect the hajj this season and the affected part will probably be fixed in a few days.’ The giant Saudi Arabian mosque was full of people preparing for the 6.30pm Friday evening prayer session, which is one of the busiest times of the week, when the crane toppled in the heavy rain.
Dramatic footage shows the moment the crane struck the building, with another video capturing the chaos and confusion inside as people ran for shelter from the devastating impact. Photos posted on social media sees the polished tiled floor of the mosque covered in rubble, bodies and pools of blood, and people fleeing the area bleeding and covered in soot.
The crane fell into the east side of the mosque, with its boom crashing through the roof, killing at least 107 people – with nine Indian citizens, 16 Pakistanis and 15 Iranians reportedly among the dead.
It is not yet known whether all those that died were killed by the crane’s collapse, as some reports claim some were killed in a subsequent stampede. The governor of Mecca region, Prince Khaled al-Faisal, was seen talking with police at the mosque a few hours after the tragedy.
Irfan al-Alawi, co-founder of the Mecca-based Islamic Heritage Research Foundation, compared the carnage to that caused by a bomb. He suggested authorities were negligent by having a series of cranes overlooking the mosque. ‘They do not care about the heritage, and they do not care about health and safety,’ he said.

Many folks – some Christians included – have spoken about Muslims getting what they deserve. And some believers see this as a direct judgment of God. Again, we must move carefully here. There is a slight possibility not everyone killed may necessarily have even been a devout Muslim, with foreign guest workers there.

But assuming they were all Muslims, another word from Jesus seems very appropriate here. In Luke 13:1-5 we read:

This word alone should help us all to proceed with caution here. We are not privy to all the particular ways of God today. Does God use natural disasters to accomplish his purposes, including judging sinners, and even his own people? Absolutely.

The Old Testament for example is full of this. There are hundreds of passages we could appeal to here. Let me offer just a few:

-Leviticus 26:19-20 I will break down your stubborn pride and make the sky above you like iron and the ground beneath you like bronze. Your strength will be spent in vain, because your soil will not yield its crops, nor will the trees of your land yield their fruit.
-Deuteronomy 32:23-24 I will heap calamities on them and spend my arrows against them. I will send wasting famine against them, consuming pestilence and deadly plague; I will send against them the fangs of wild beasts, the venom of vipers that glide in the dust.
-2 Samuel 24:15 So the Lord sent a plague on Israel from that morning until the end of the time designated, and seventy thousand of the people from Dan to Beersheba died.
-2 Kings 21:12 Therefore this is what the LORD, the God of Israel, says: I am going to bring such disaster on Jerusalem and Judah that the ears of everyone who hears of it will tingle.
-Jeremiah 3:2-3 You have defiled the land with your prostitution and wickedness. Therefore the showers have been withheld, and no spring rains have fallen.
-Jeremiah 11:23 I will bring disaster on the people of Anathoth in the year of their punishment.
-Jeremiah 27:8 I will punish that nation with the sword, famine and plague.
-Ezekiel 5:17 I will send famine and wild beasts against you, and they will leave you childless. Plague and bloodshed will sweep through you, and I will bring the sword against you. I the Lord have spoken.
-Haggai 2:17 I struck all the work of your hands with blight, mildew and hail, yet you did not return to me,’ declares the LORD.

But as mentioned, while God sent his prophets to give a clear word about such things back then, we do not have the same sort of sure word today about particular disasters. So we must be cautious and wise here. Was the crane disaster in Mecca the specific judgment of God on a false religion?

Perhaps. But we must not be quick to offer judgment. We can however pray for the situation. We can pray for the family members and loved ones who are left behind. We can pray that something like this – as with all tragedies and disasters – will help these folks to seek the one true God, and his son Jesus.

That would be a much more helpful response to such disasters than to make somewhat presumptuous claims about what exactly God may be doing in these situations.

11 Replies to “On Mecca and Natural Disasters”