The historic speech by Pope Francis to a joint session of Congress in Washington is now just that – history. Catholics and non-Catholics alike were quite eager to see what he would say – or not say. And those who are more or less conservative have been disappointed in various ways.

In Australia it was on live television last night so anyone could listen, and we also have the full transcript, so we need not rely on sketchy media reports. While the Pope received a number of rounds of applause during his speech, there were some disappointing areas, as well as some notable omissions. 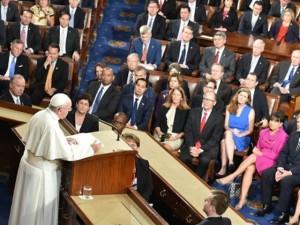 For a church that is concerned about the killing of the unborn, the most notable omission was any direct mention of the ‘A’ word – abortion. There was just a one-liner, and this has disappointed many. Instead of discussing abortion at length, he went after capital punishment instead:

The Golden Rule also reminds us of our responsibility to protect and defend human life at every stage of its development. This conviction has led me, from the beginning of my ministry, to advocate at different levels for the global abolition of the death penalty. I am convinced that this way is the best, since every life is sacred, every human person is endowed with an inalienable dignity, and society can only benefit from the rehabilitation of those convicted of crimes. Recently my brother bishops here in the United States renewed their call for the abolition of the death penalty. Not only do I support them, but I also offer encouragement to all those who are convinced that a just and necessary punishment must never exclude the dimension of hope and the goal of rehabilitation.

This of course flies against not only the clear teachings of Scripture, but also against various past Catholic social teachings. But I discuss that further elsewhere, eg: billmuehlenberg.com/2011/05/05/killing-and-catholic-social-teaching/

So he goes for the more PC anti-death penalty line, while refusing to talk about genuinely evil murder (as opposed to licit killing), the slaughter of the babies. Another area that many of us are concerned about – including many Catholics – is a weak or poor understanding of one of the real threats we face: political Islam.

He obliquely mentioned this, but in yet another instance of moral equivalence: yes there are a few bad Muslim eggs, but so too there are in every religion:

We know that no religion is immune from forms of individual delusion or ideological extremism. This means that we must be especially attentive to every type of fundamentalism, whether religious or of any other kind. A delicate balance is required to combat violence perpetrated in the name of a religion, an ideology or an economic system, while also safeguarding religious freedom, intellectual freedom and individual freedoms. But there is another temptation which we must especially guard against: the simplistic reductionism which sees only good or evil; or, if you will, the righteous and sinners.

Um, actually I am happy to say there are clear lines between good and evil: those who have boldly stated that they want to kill us and enslave us are evil in my books, and are not morally identical to their victims. There are evil political ideologies and religions. While none are perfect, some are clearly far worse than others.

As to marriage and family, these tremendous social goods (and Christian goods) only get a very brief mention. Marriage is mentioned once, and one of the major threats to both institutions is never mentioned: the militant homosexual lobby. He said this:

I will end my visit to your country in Philadelphia, where I will take part in the World Meeting of Families. It is my wish that throughout my visit the family should be a recurrent theme. How essential the family has been to the building of this country! And how worthy it remains of our support and encouragement! Yet I cannot hide my concern for the family, which is threatened, perhaps as never before, from within and without. Fundamental relationships are being called into question, as is the very basis of marriage and the family. I can only reiterate the importance and, above all, the richness and the beauty of family life.

That is a good start, but he could have said much more on this. This is one of the key moral battles of our time. Sorry, it is not global warming or the free market. So once again, pro-family Catholics (and Protestants) were rather disappointed here.

And of course as an evangelical Christian, I wish he would have talked about the most important topic there is: Jesus Christ and the good news of the gospel for lost sinners. He of course did mention the Christian socialist Dorothy Day and her social gospel work, but that is not quite what I have in mind.

While elevating Jesus and his work at Calvary may not have been his purpose in this important address, to fail to mention these matters even once seems like a real dereliction of duty for any major religious leader in the Christian tradition. Regrettably a social gospel without the biblical gospel becomes mere leftist social activism.

On the abortion issue American pro-lifer Father Peter West said this: “It’s a shame that Pope Francis neglected to mention the rights of the unborn while pleading for an end to the death penalty. Planned Parenthood must be rejoicing.”

Writing just before his speech, Robert Royal, president of the Faith and Reason Institute in Washington, D.C. and member of the Catholic diocese there, said this: “Conservatives worry about the way he seems to have turned from the culture war over issues like abortion and homosexual marriage. The image that gets transmitted is that these are not ‘Francis issues’ – that he’s more interested in income inequality, the gap between rich and poor, the environment.”

Libertarian Catholic judge and commentator Andrew Napolitano was even more scathing. He penned this piece a day before the speech to Congress:

The Church has taught for 400 years that abortion is murder. Because the victim of an abortion is always innocent, helpless and uniquely under the control of the mother, abortion removes the participants from access to the sacraments. Until now. Last week, Pope Francis, without consulting his fellow bishops, ordered that any priest may return those who have killed a baby in a womb to the communion of the faithful. He said he did this because he was moved by the anguished cries of mothers contemplating the murder of their babies.
I doubt he will defend these decisions before Congress. He will, instead, assault the free market, which he blames for poverty, pollution and the mass migrations into Europe away from worn-torn areas in the Middle East.
In his papal exhortation on capitalism, Pope Francis spectacularly failed to appreciate the benefits of capitalism to the health, wealth and safety of the poor. Instead, he has reworked the Peronism of his youth to advocate government-mandated redistribution of wealth and to condemn those who work hard, employ others and achieve wealth — even when they give some of that wealth to the Church.

I will leave it to Catholics to debate amongst themselves as to whether the judge has got all this right or not. All I am doing here is offering the thoughts of a few Catholics. Many others could be appealed to in their assessment of the speech in particular and the Pope in general.

In conclusion, please do not get me wrong – this is not just a case of me, a Protestant, launching into some anti-Pope thing. Most of the folks I quote above are Catholics. And I have had numerous conservative Catholic friends and colleagues tell me that they are quite concerned about the new Pope.

He seems to be all over the place: one minute he sounds good, the next minute he sounds atrocious. And some recent past Popes I have been quite supportive of. So it depends on who it is, and in this case, there seems to be real ambivalence about this guy, not just with me but with many others – Catholics included.

So don’t attack me – I am just the messenger here. And this is of course not an anti-Catholic diatribe. It is simply discussing a very public talk made by a very public Pope, and recording some of the comments of others. Those who want to get into sectarian debates are advised to go elsewhere thanks.

There are plenty of other sites where people can engage in such sectarianism. Indeed, as has always been my policy here, those comments which are simply about attacking Catholics, or Protestants, will be deleted.

21 Replies to “The Pope’s Speech to the US Congress”